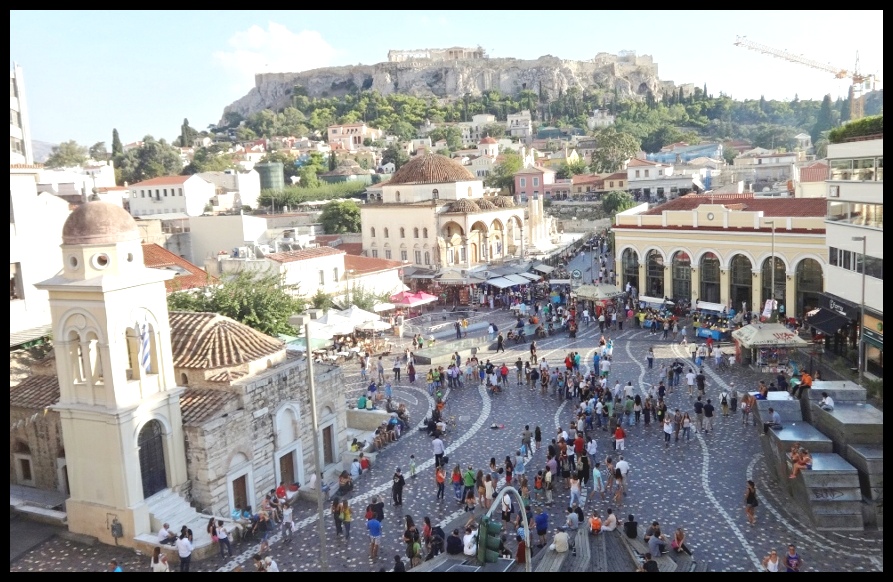 BELOW : The view from our hotel, looking at the Acropolis in the background, and the Monastiraki underground railway station entrance and Athens flea market area, in the foreground. 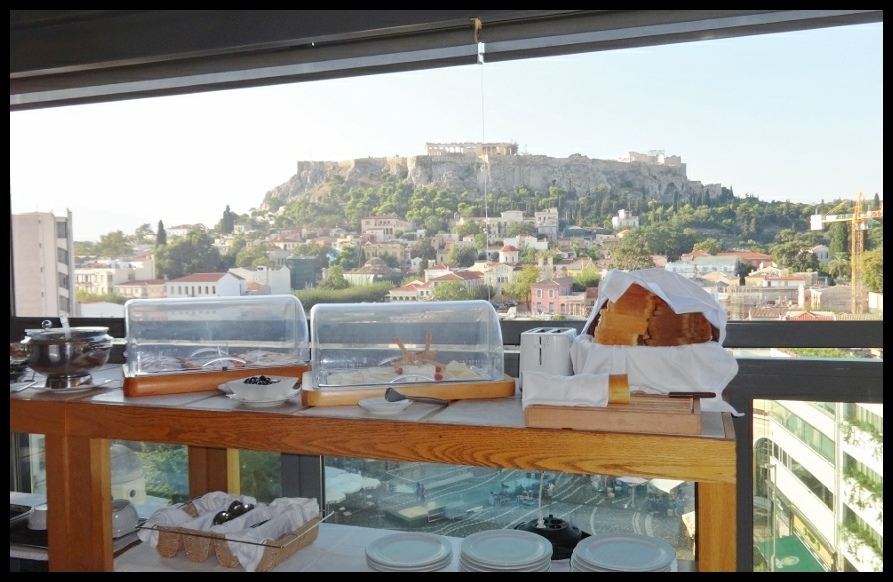 BELOW : The view from our hotel, looking at the Acropolis in the background, as viewed from the hotel breakfast area, at the top of the hotel.

BELOW : The view of on-going works to restore the Parthenon, on the Acropolis. As you can see, there were just a couple of other people who shared our interest in exploring the area.

BELOW : They usually talk about “carrying the weight of the world on your shoulders”, these ladies look like they are carrying it on their heads ! 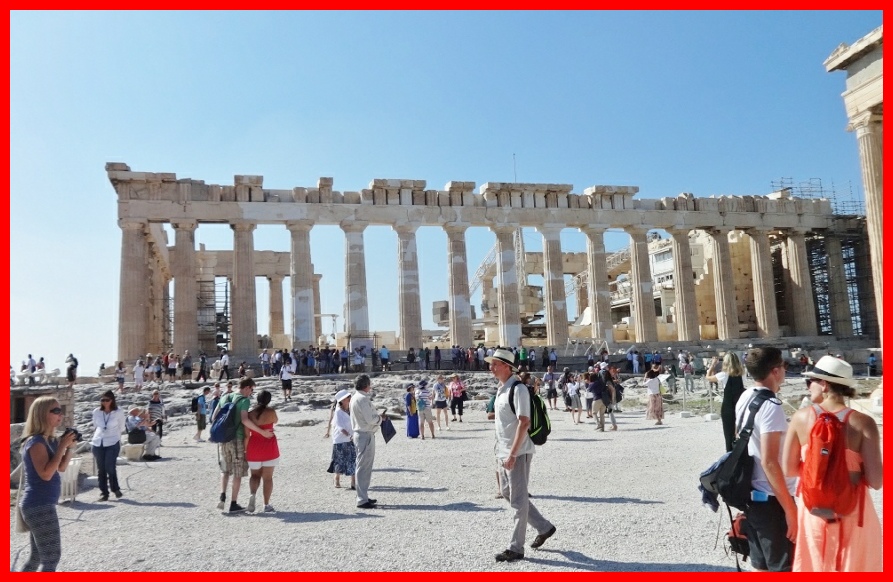 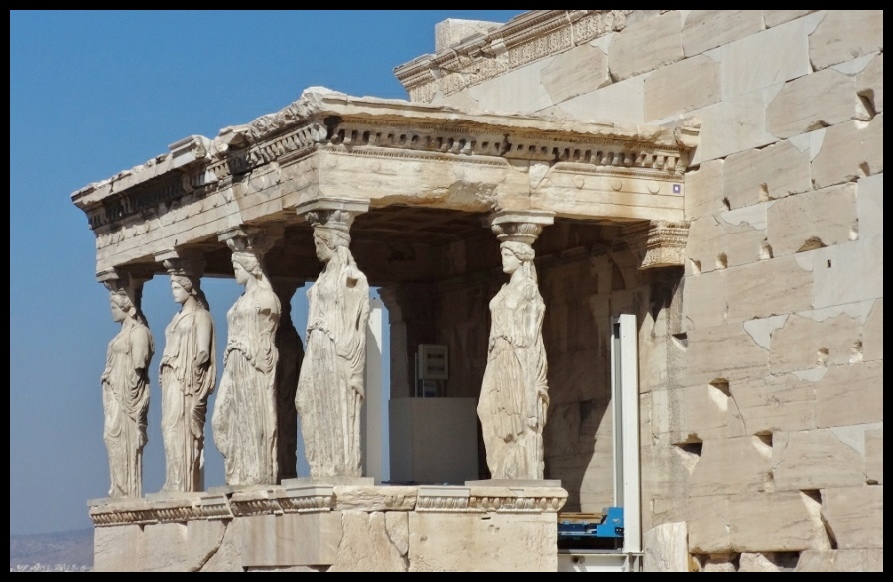 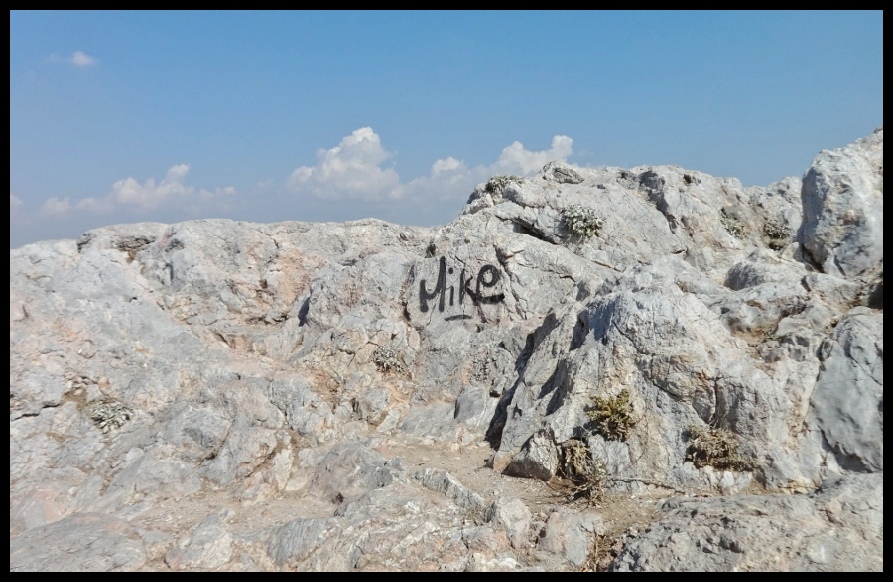 BELOW : This photographic evidence (on a hill near the Acropolis) may seem to imply that I have graffiti tendencies. I will point out that it is purely circumstantial ! 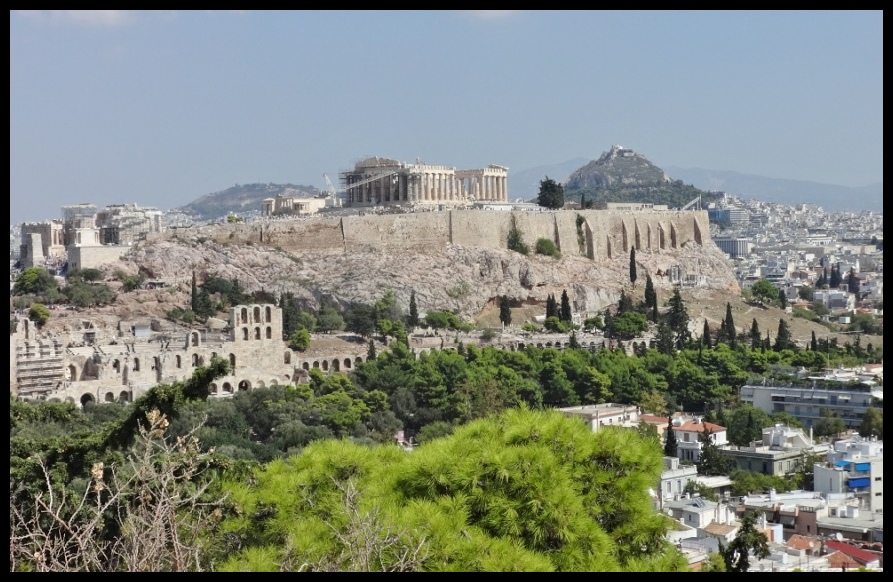 BELOW : The Parthenon viewed from another location, and the Hill of Lycabettus  in the background. We did go to the Lycabettus hilltop on the little train (funicular), and then walked back down the hill. 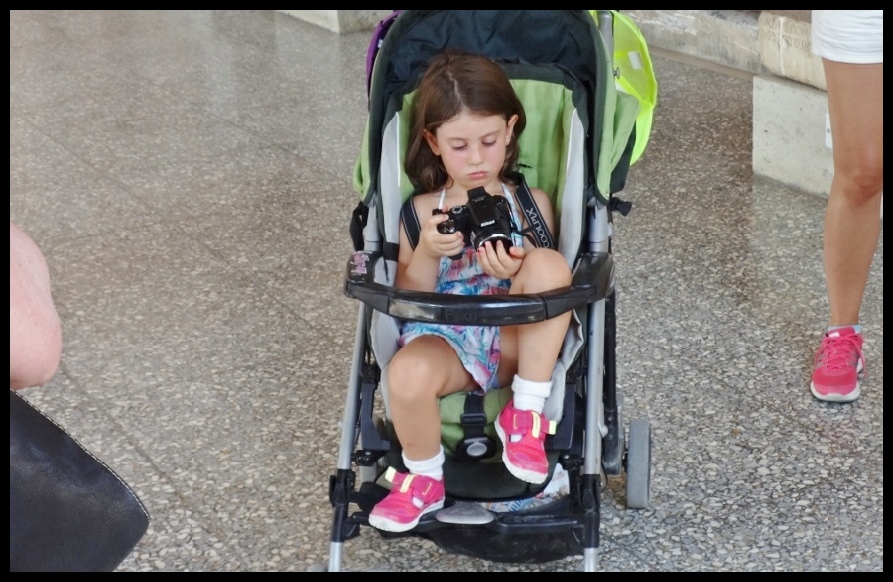 BELOW : The serious tourists are getting to be younger and younger ! It’s good to see that younger photographers are now able to record their work using “pram cam”. 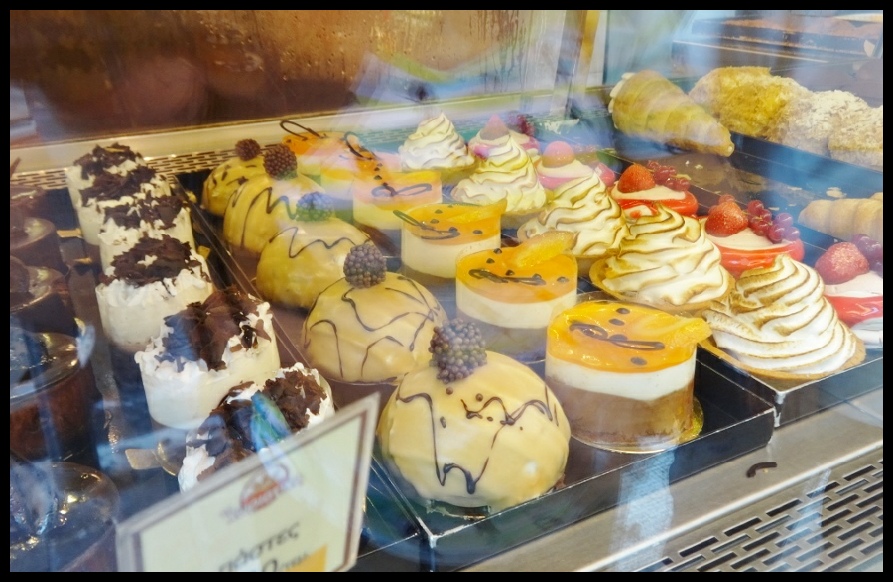 BELOW : We were just walking past this bakery and these little offerings were screaming out to me “Michael come and free us from this window display !” 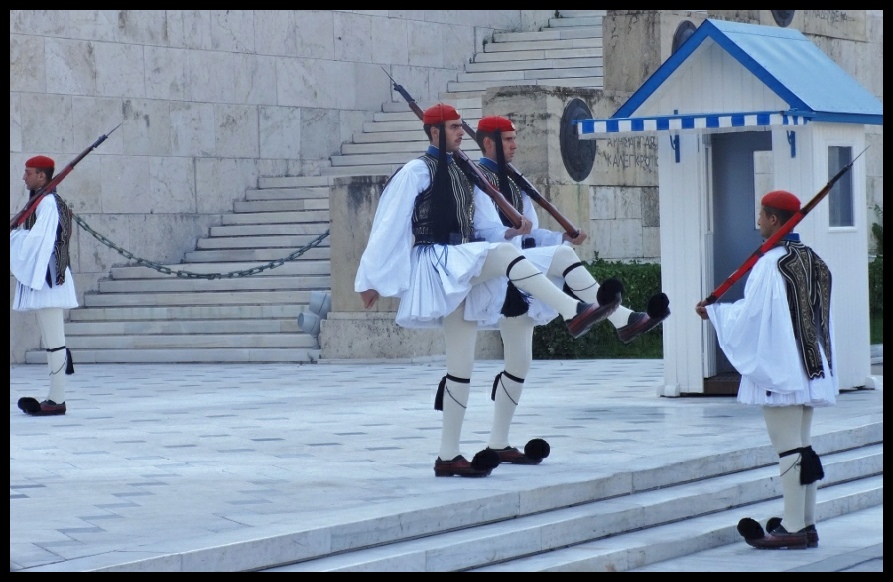 BELOW : The changing of the guard outside the Parliament building. An interesting uniform for a soldier to have in their wardrobe ! 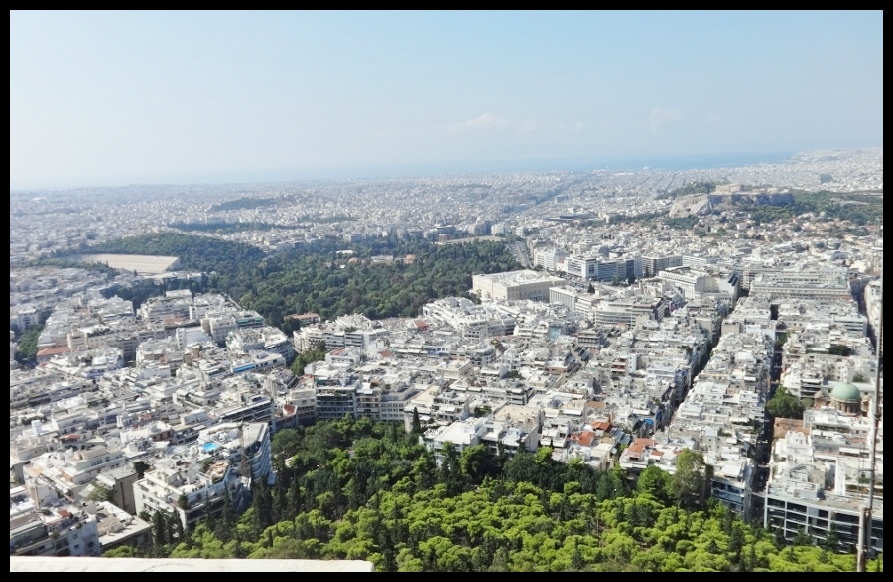 BELOW : Part of the view of Athens, from the top of the Hill of Lycabettus. An incredible place to have a panoramic view over so much of the city. 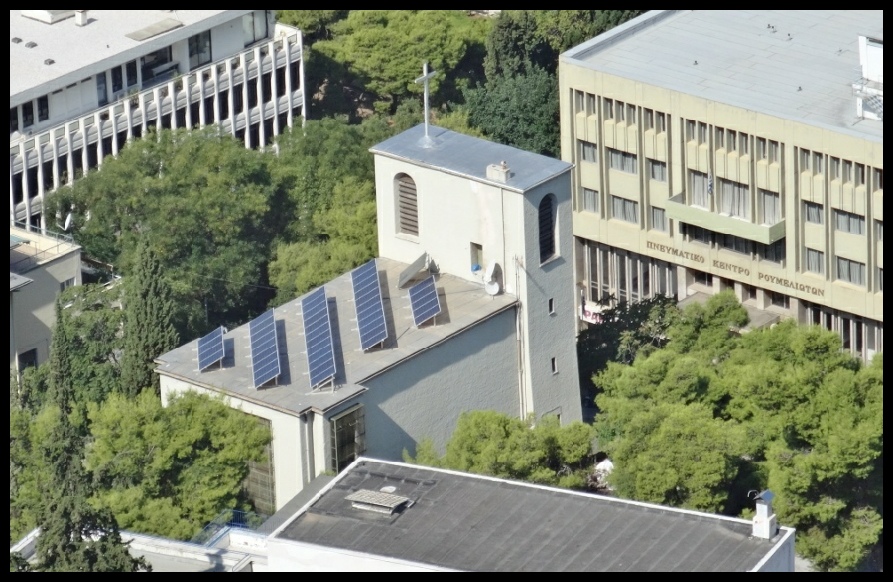 BELOW : Solar panels are even fitted on top of a church building. 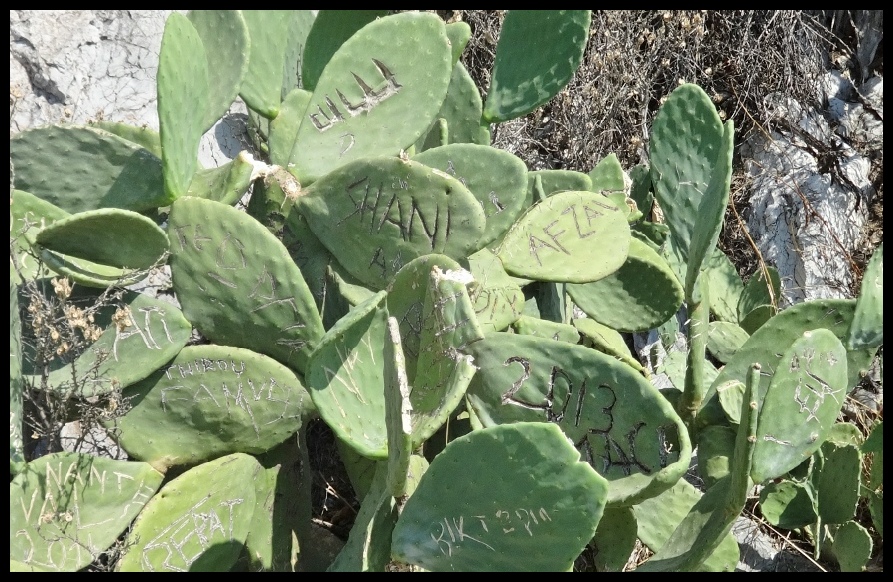 BELOW : Leaves of a prickly pear plant have been inscribed by passers-by with names of the guilty. Is this a new form of graffiti ? 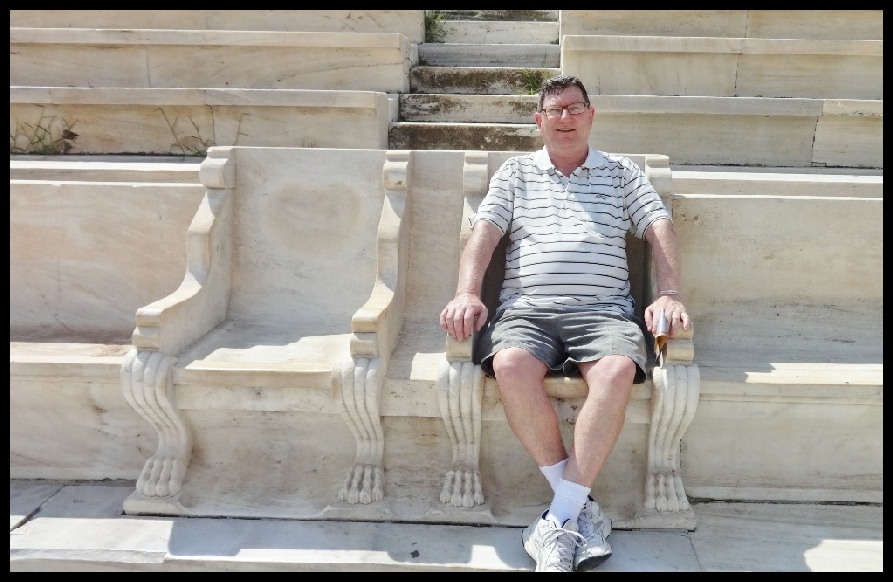 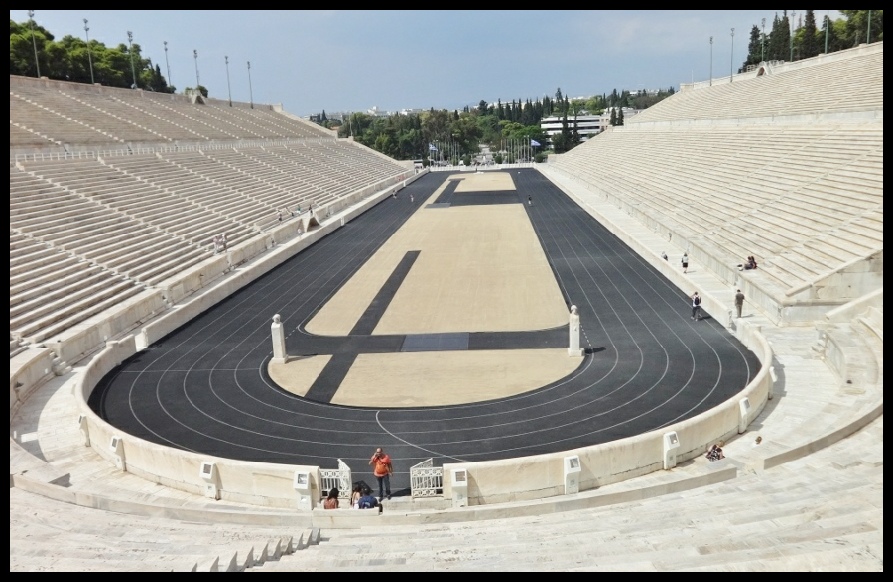 BELOW : The stadium seating is all made of Marble, and has a seating capacity of 60,000 people. 3 days after we left Athens Lady Ga Ga was going to be doing a concert at this venue !  Truly. 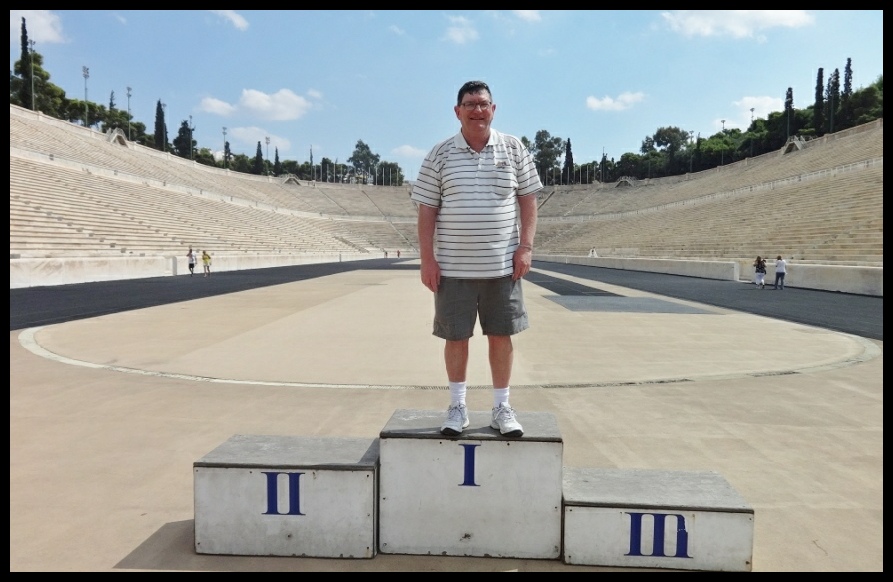 BELOW : You probably don’t remember when this guy competed in the Olympics. Reason 1 = You were not even born when he was in his prime. Reason 2 = He would have had a fitness issue, even then ! . . :) 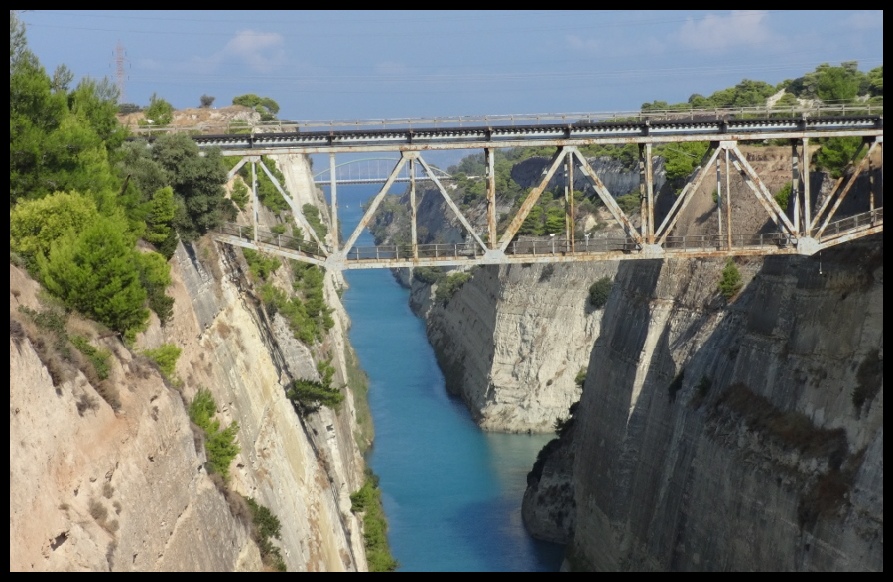 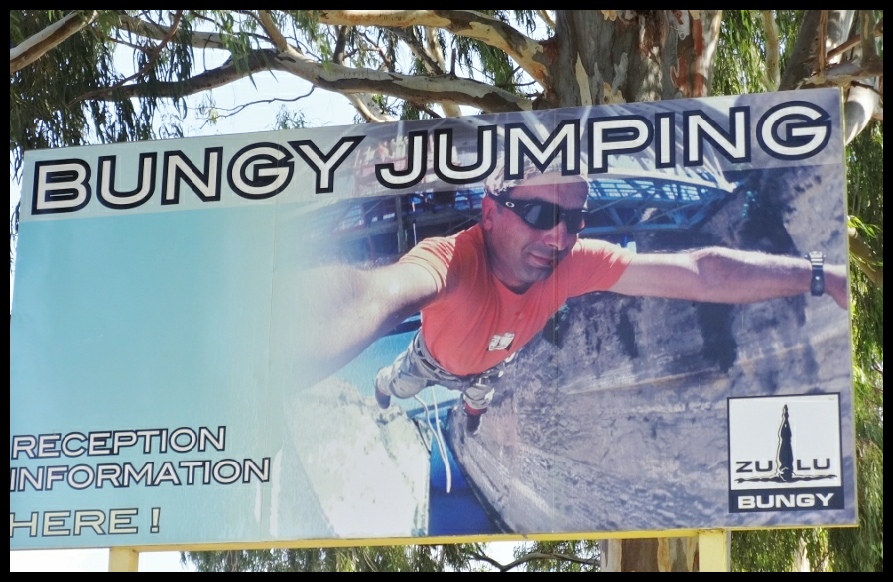 BELOW : Of course, I gave the Bungy Jumping a try . . NOT ! I must say, it would be an interesting place to try it though, not much room for error with those rock walls either side of you. 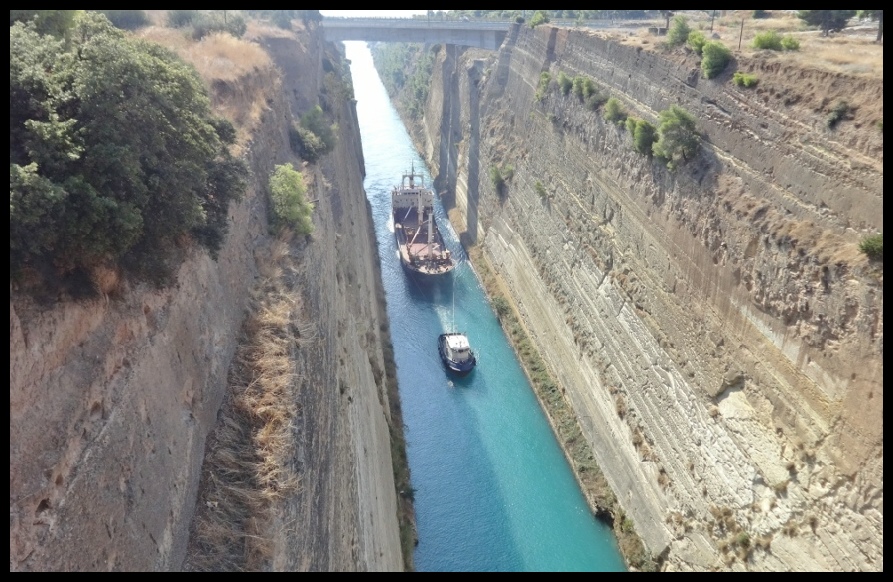 BELOW : Not a real lot of room for ships to make their way through, only about 21.3 metres wide at sea level, and 24.6 metres wide at the top. It is about 90 metres from the top, down to sea level. 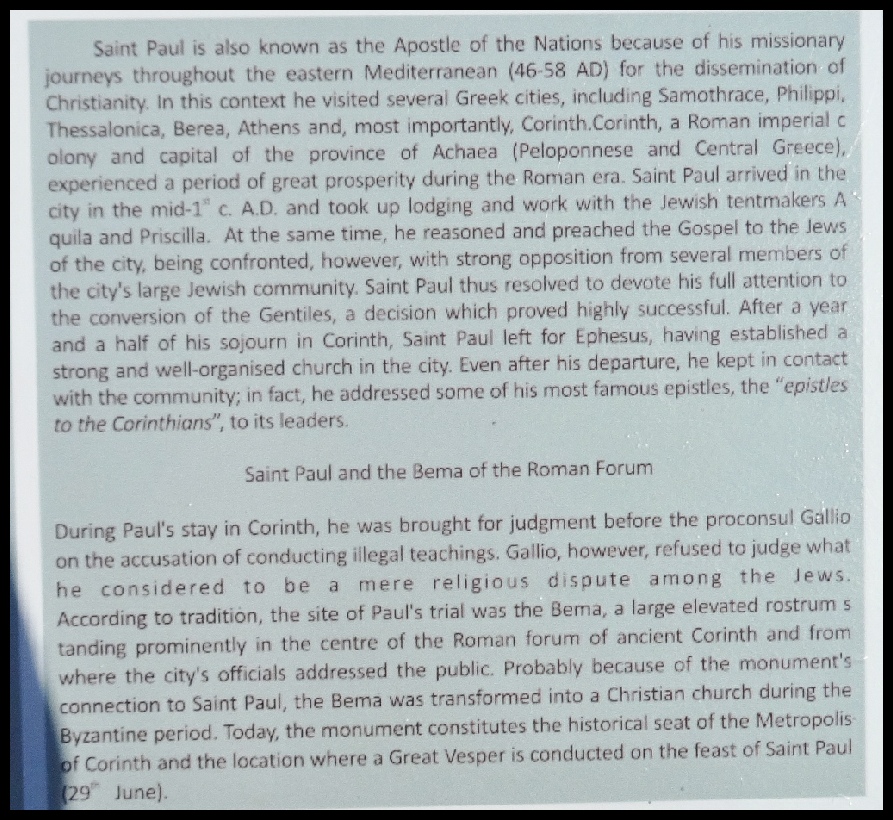 BELOW : We also travelled on a half-day tour to Ancient Corinth. An area which has great significance to us as Christians, as the Apostle Paul spent time here spreading the Gospel. 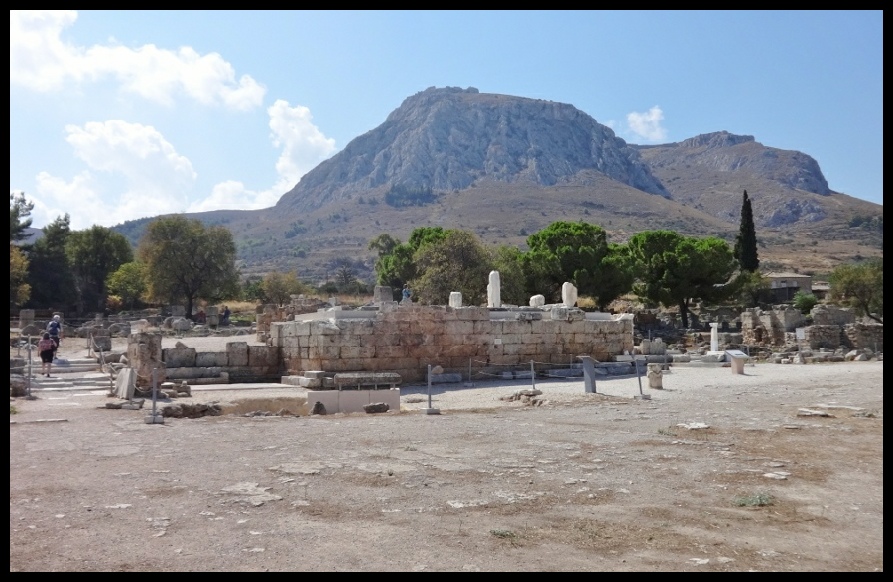 BELOW : Standing in the remains of Ancient Corinth and looking up to an Acropolis on the hills above the old city. 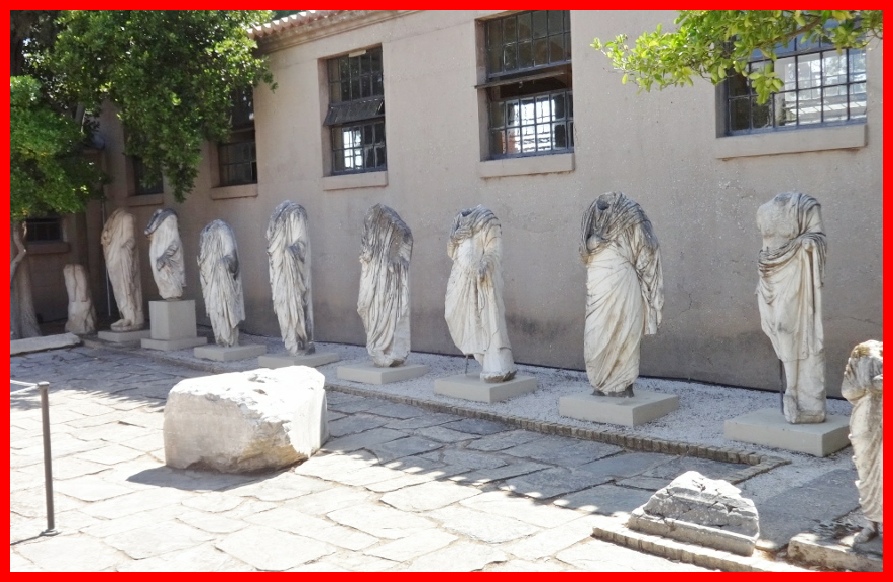 BELOW : Our tour guide at one point said “You may see some statues have lost their heads” . . This did seem a bit of an understatement, as we were hard pressed to find a statue with a head ! 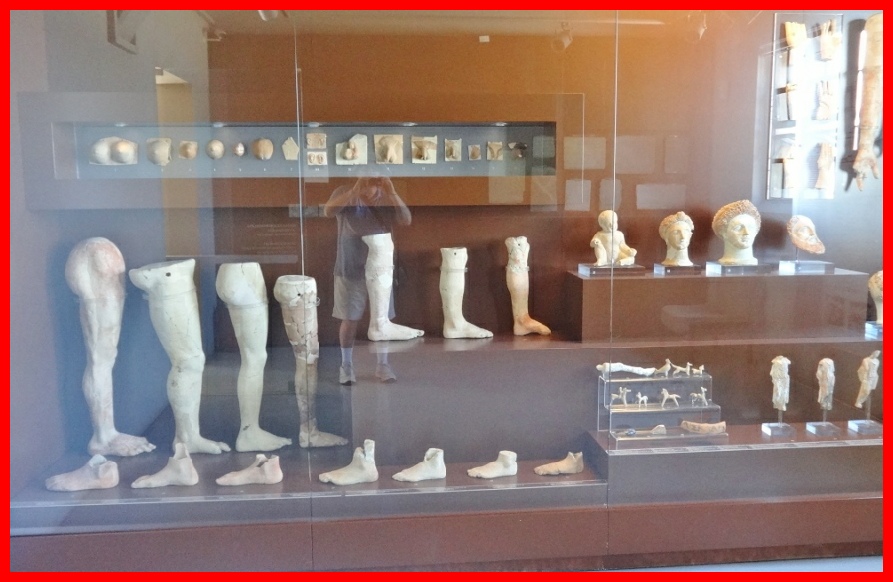 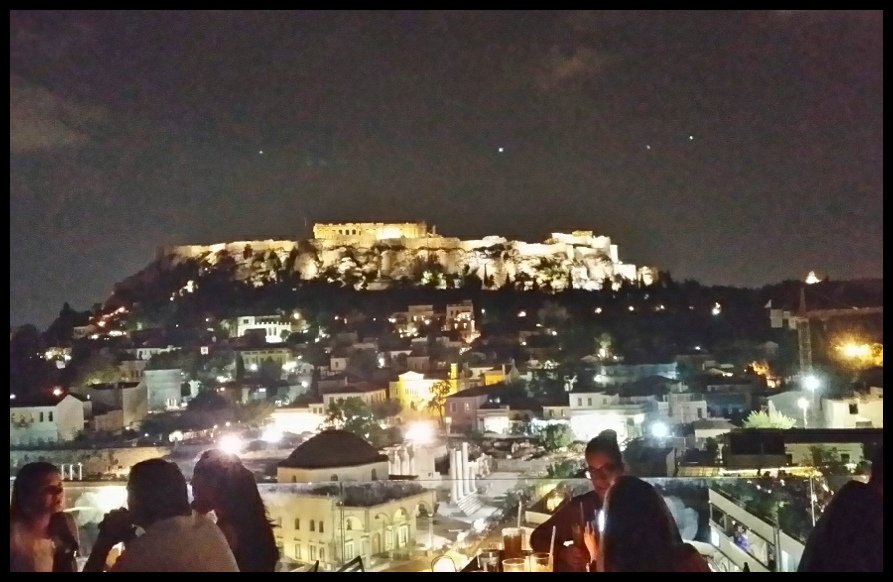 BELOW :We were able to find a random collection of heads, legs and feet in one particular part of the museum though !

BELOW :Our last night in Athens before we left for Mykonos. Taken from our hotel rooftop, which was a cocktail bar area by night. 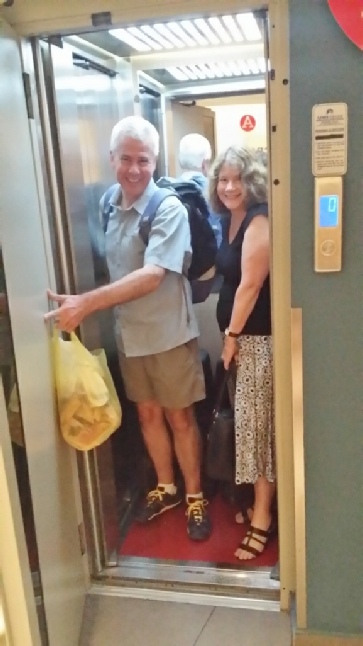 BELOW : Obviously an invited guest, seated on his Throne at the Panathinean Stadium (Kalimarmaro). (Looks like his date might not have shown up to join him though !)  This stadium hosted the 1st modern Olympics in 1896. It is now used as a multi-purpose venue for a variety of celebratory events.