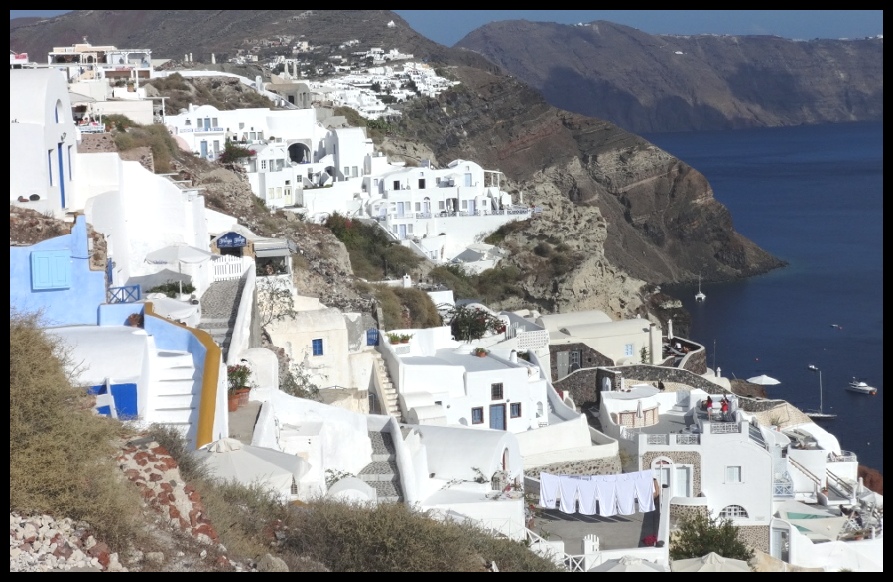 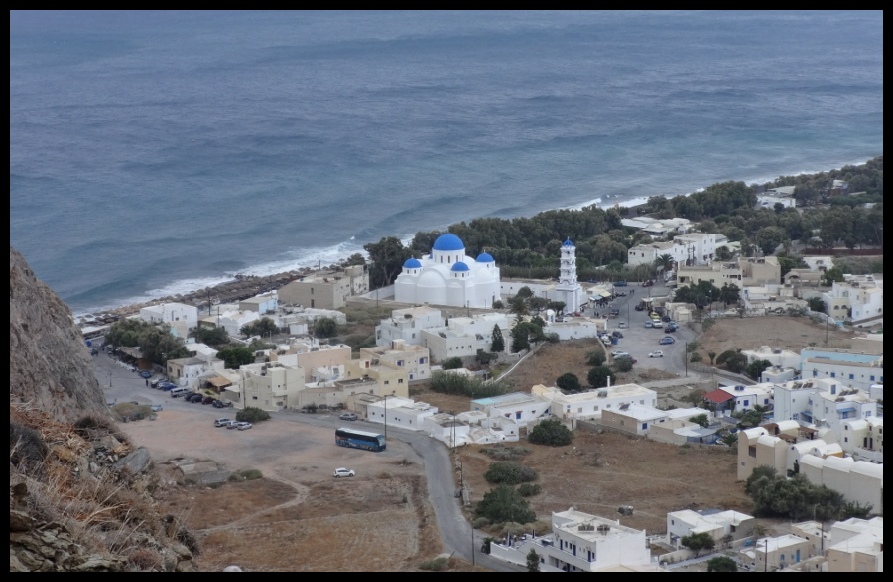 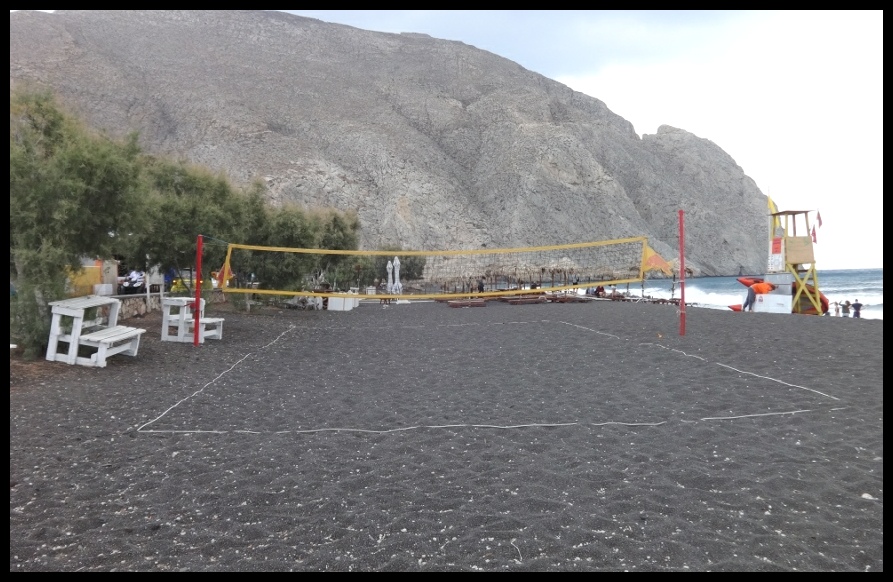 BELOW : Yes, another blue domed church can be found in this village. It took us about 30-40 minutes to wind our way down the track from up on the top of the hill, and arrive at the beach area. 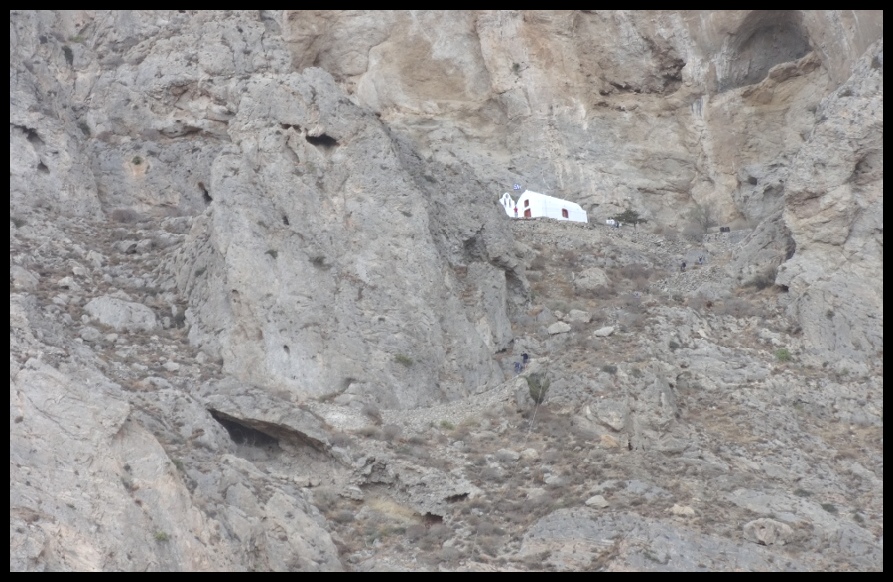 BELOW : One of the questions which we were not really able to answer was “Why are so many churches built in such hard to access places ?”  This one was a bit further along on the hill we just descended. 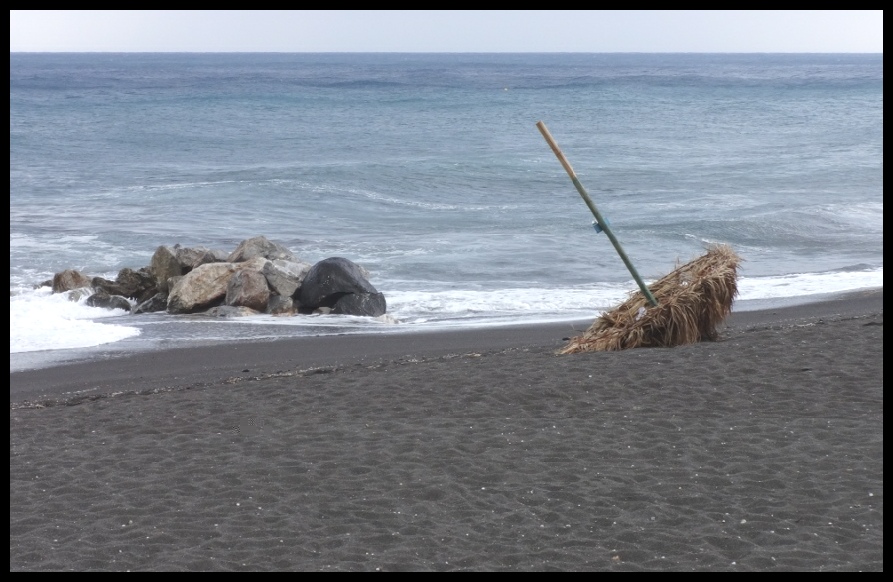 BELOW : The wind I was referring to earlier was strong enough to turn some of the beach umbrella population upside down ! 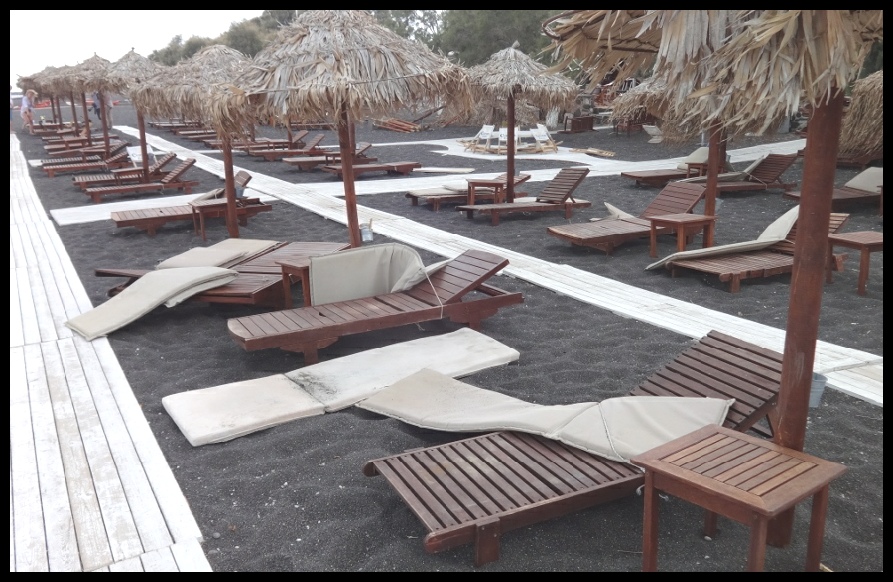 BELOW : And some of the sun-bed mattresses had also decided to relocate when they were put under pressure from the ‘Big Draft’.

BELOW : The volleyball court had no players on this day. I’m not sure if that was because of the wind . . or whether it was just because it really is not all that good a surface to play on. By the way, that hill in the background, would be the one we walked down from, to get here !

BELOW : This would be the caravan and camping area in Perissa. It may appear to be just a little unloved . . . and that would be because it is ! 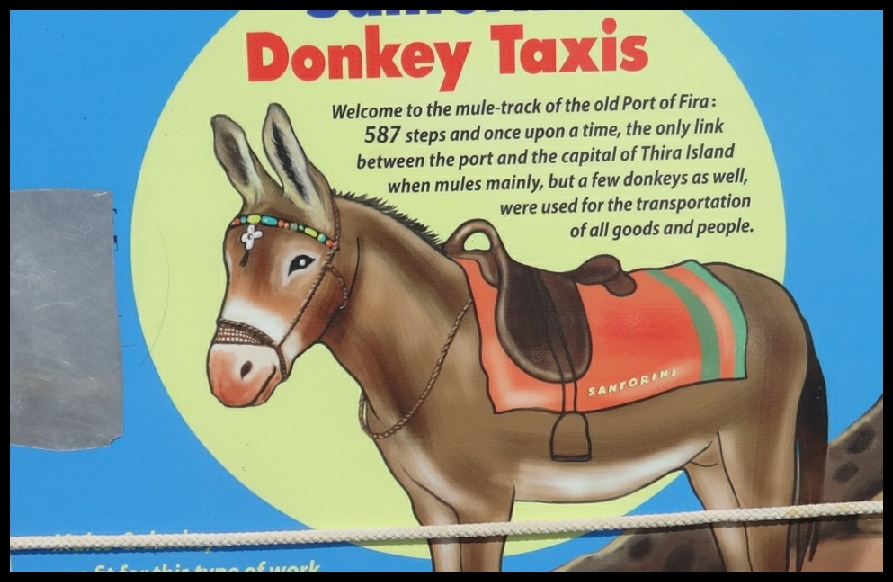 BELOW : The next two photos are of a sign located at the bottom of the donkey path. There are two opposing camps of people related to the donkey taxi business. For and Against. This signage has been erected by the pro-group, to make tourists feel better about the lot of the donkey. 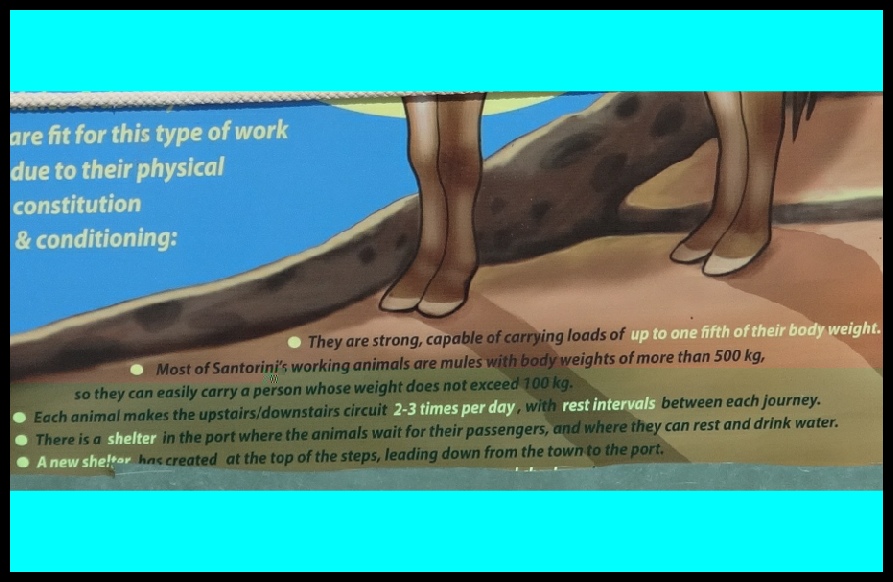 BELOW : I don’t think this sign convinced me that riding a donkey was really in the donkey’s best interest. However, I did make a statement at the top of the path, that I may need to reconsider my position if we walked to the bottom and found that the cable-car for some reason was not working ! 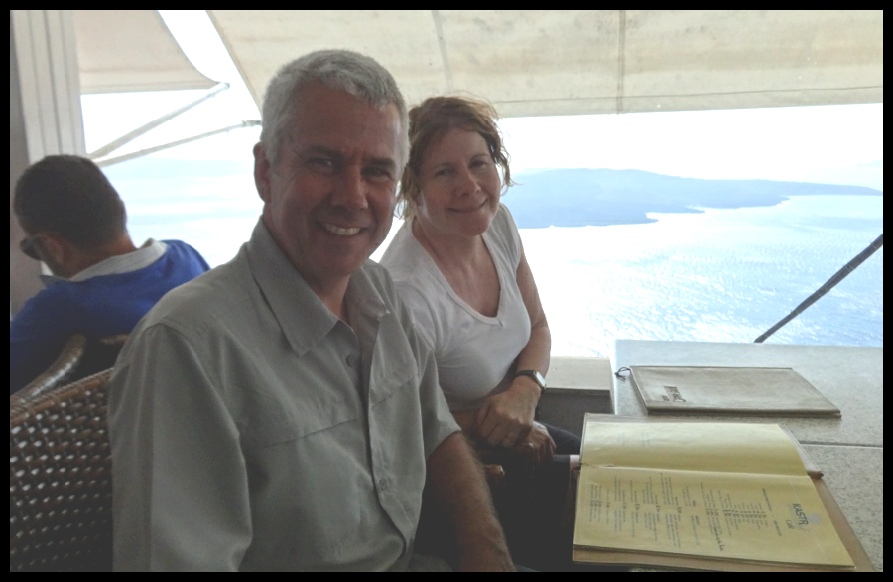 BELOW : Well, we made it back up to the top in the cable-car, thus avoiding any donkey dilemma ! It was time again to enjoy sustenance and appreciate the views from a cliff-side restaurant. 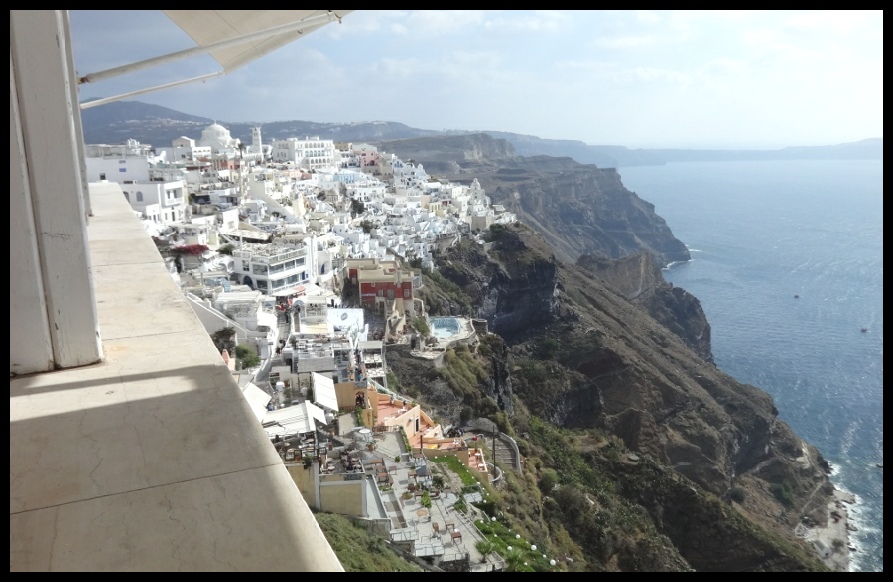 BELOW : This photo was taken by Helen, basically looking toward the rear, over her left shoulder from where she was sitting in the photo above. 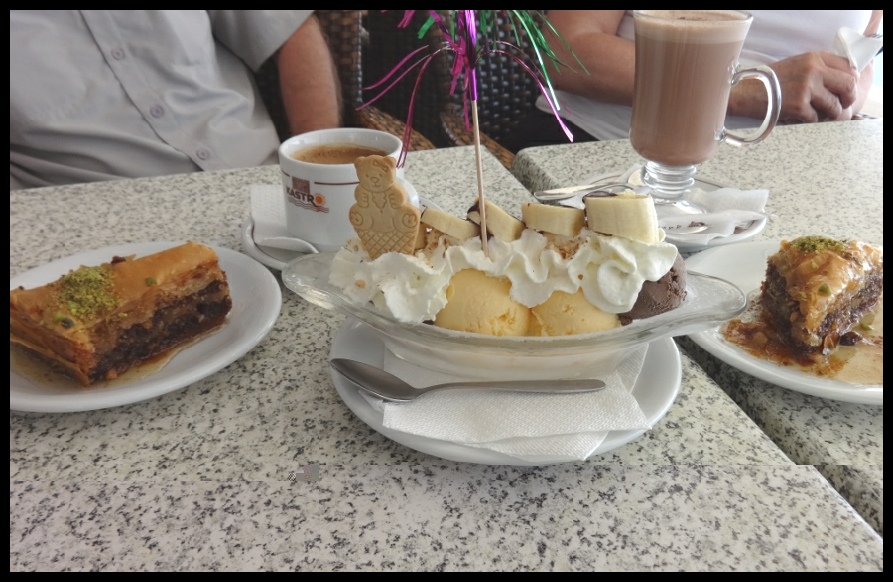 BELOW : There needs to be a good reward for a person prepared to descend 587 steps into the abyss ! Fortunately this banana split was waiting (with my name on it) after we had returned to the top again on the cable-car. The baklava offerings either side were the chosen rewards of my fellow travellers. 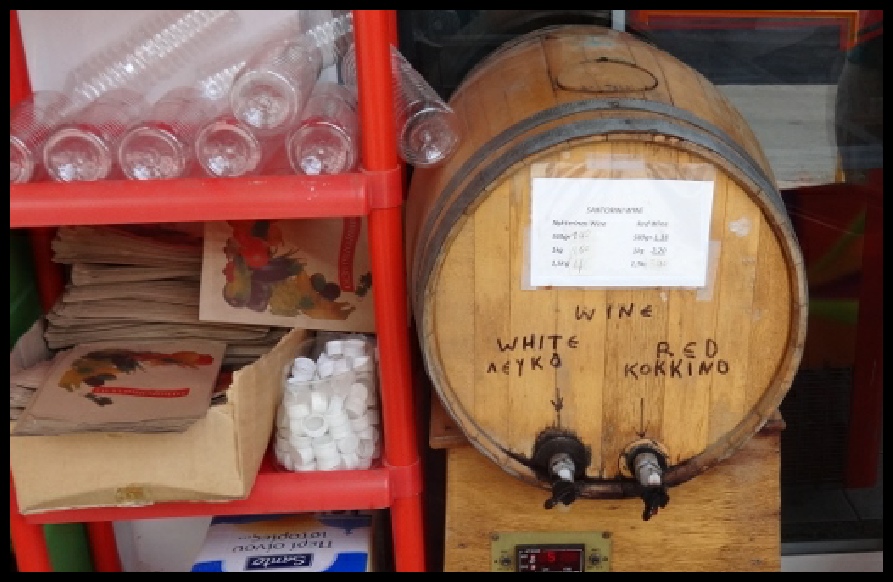 BELOW : White and Red wine are available here at a local family run supermarket. You just grab one of the plastic bottles, (to the left of the cask) place it under the white or red tap in the cask, and fill up your bottle then take it to the register with your other shopping. Generally the wine is from the family vineyard. 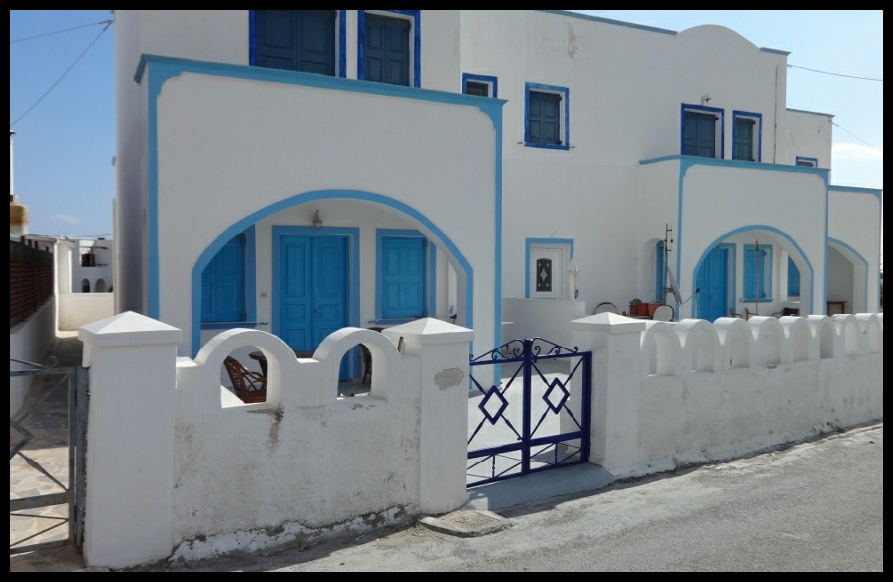 BELOW : An example of some of the local housing in the back streets, in the village where we stayed on Santorini, Kamari. 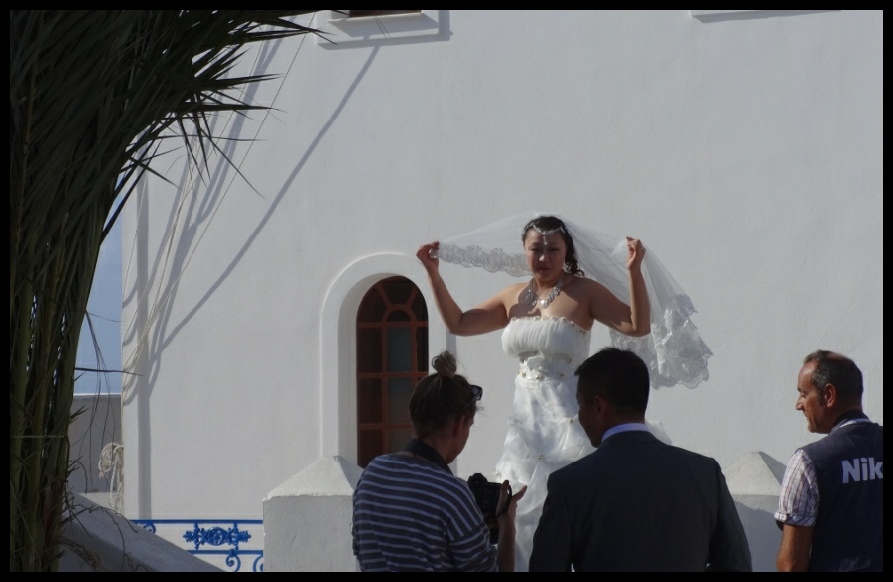 BELOW : We are back in Oia again to check out today’s sunset. Another Bride is roaming the streets, having photos taken of her with her veil blowing in the wind, but I did not really catch the moment !

BELOW : A view of some of the houses and holiday accommodation built on the sides and top of the cliff faces around Oia.

BELOW : Today we took a mini-bus ride to the top of the hill which separates our village from the next adjoining village. Then we walked down the other side of the hill. This walk took us down to the village of Perissa, the next beach around the headland from where we were staying, in the village of Kamari. 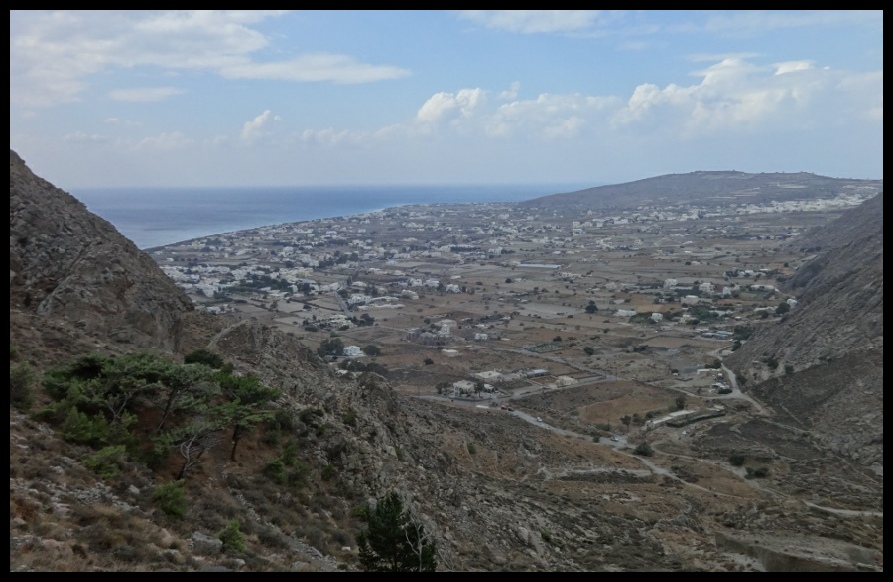 BELOW : It was a VERY windy day, and a number of sensible people got straight back on the bus when it arrived at the top of the hill ! However, being such intrepid explorers we decided to soldier on, and LOVED it. 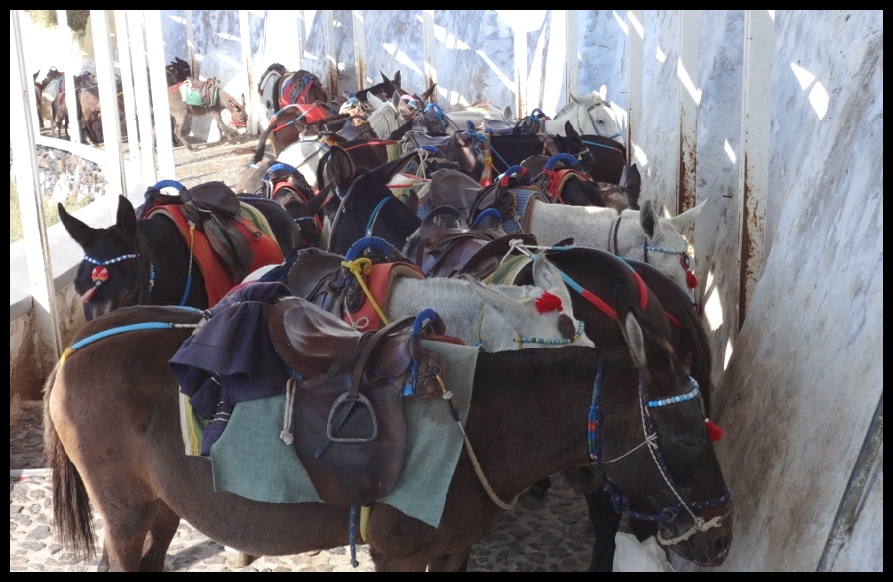 BELOW : The Donkey path at Fira has around 587 steps, and it climbs around 250 metres. Fortunately, we were at the top of this path, so the decision was made (by consensus) to descend the steps and then return to the top using the cable-car. The upper Donkey Station was not particularly busy as we passed by. 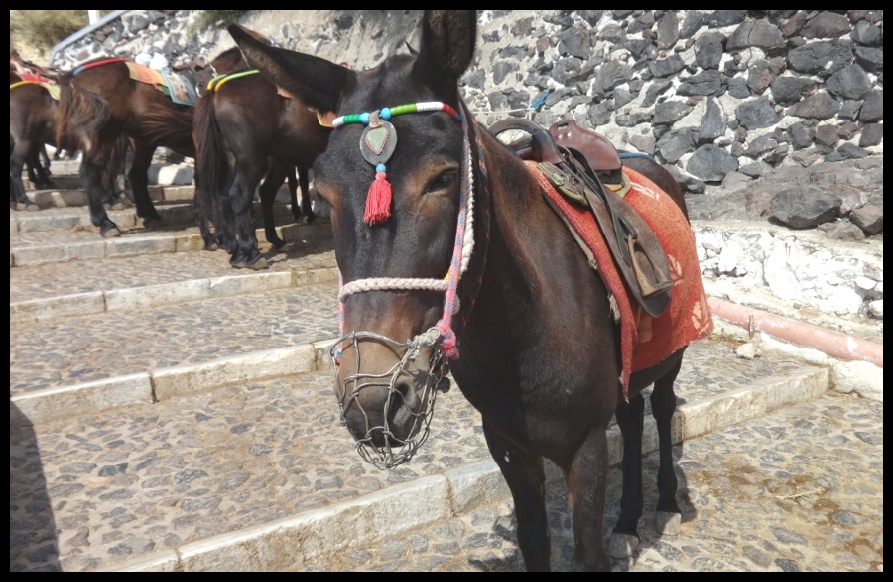 BELOW :  One donkey did chat with me during our descent (probably a relative of Mr Ed or Francis The Talking Mule I assumed). When I asked him why did they have the mouth covers on, he just giggled at me for a moment . . “O.H.& S. Issue” he told me, “To discourage tourists from trying to pash the donkeys ! “ 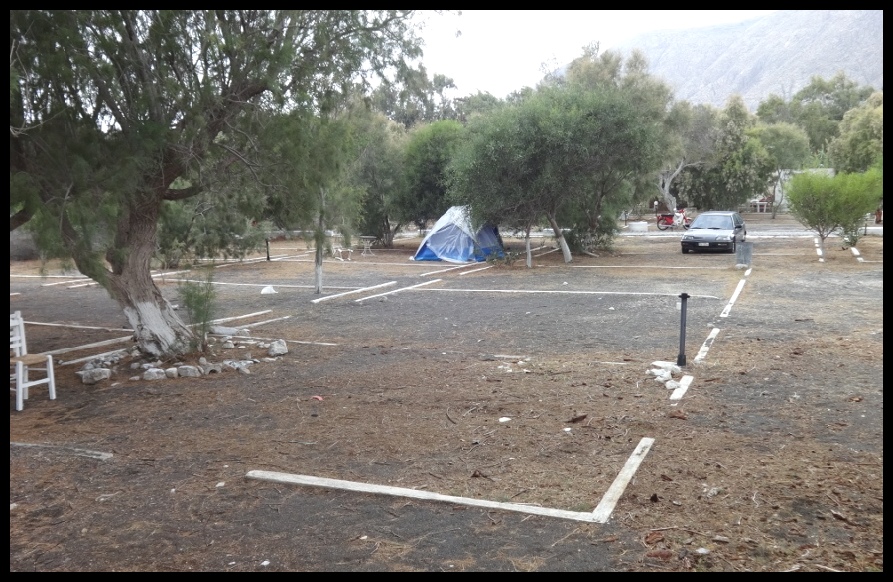 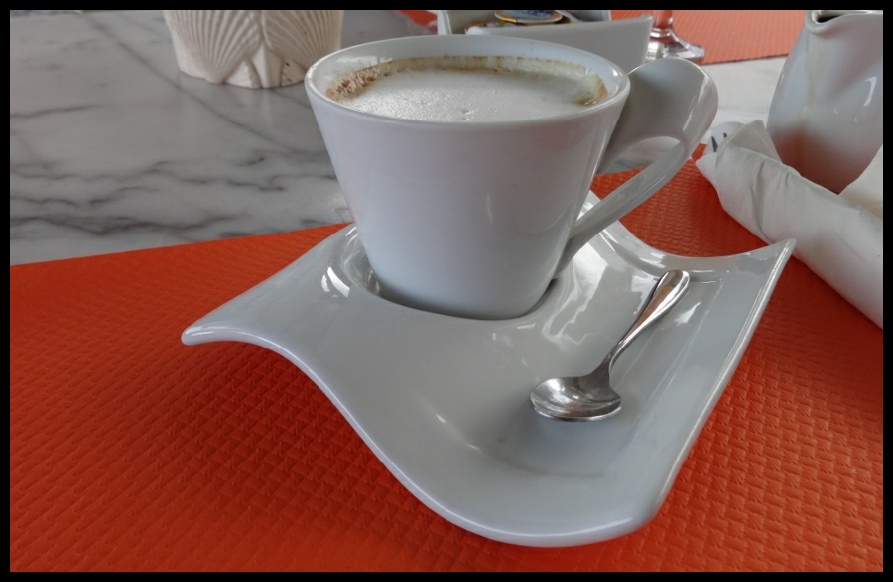 BELOW : In the midst of all this wind we were able to find a nice beach-front cafe, where we were protected from the elements. The coffee was served on a saucer aerodynamically designed to perform in anything up to a Force 5 gale !

BELOW : We jumped on a local bus which took us up again to the main town on Santorini, Fira. I had to take a photo of this sign outside a tavern, it appealed to my warped sense of humour. Because VB was the product advertised, I thought that the Anonymous lines may have been penned  by an Aussie ! 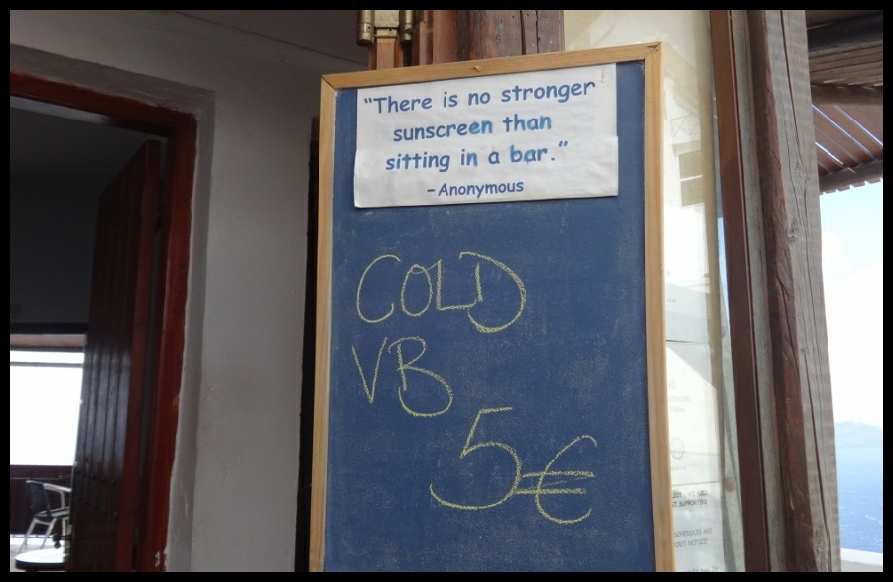 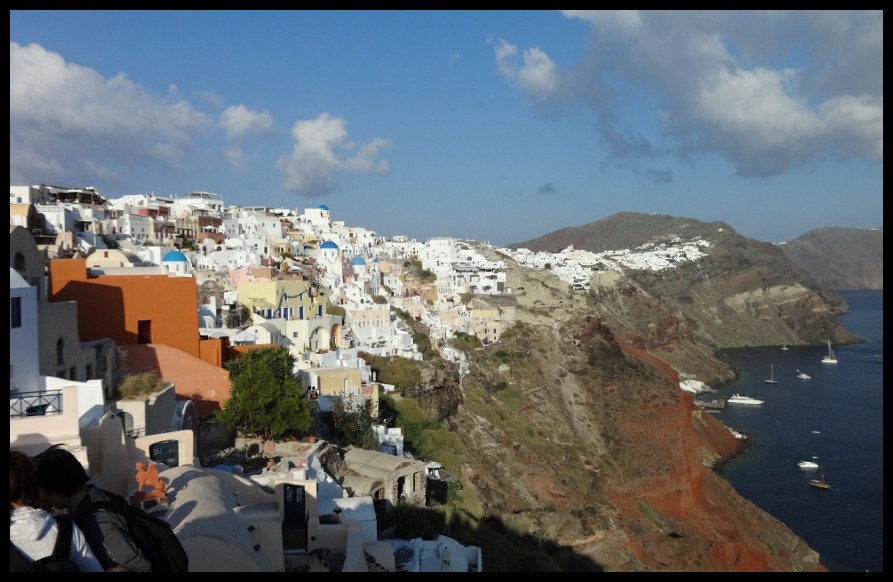 BELOW : Another photo looking back along the top of the cliffs, shows that white is the predominant colour choice for buildings, however, a few renegades have opted to add a splash of colour here and there. 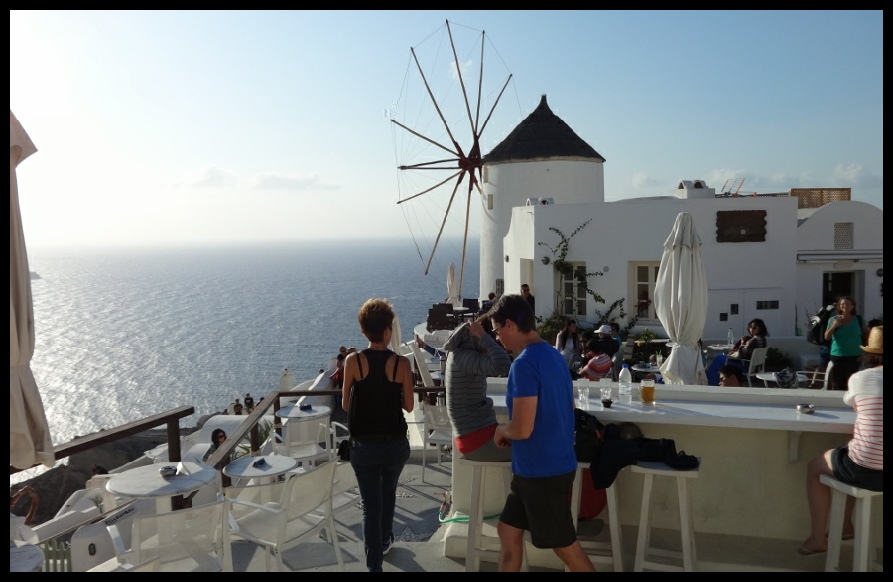 BELOW : We are getting closer to our sunset viewing point. We just want to get a little bit further down the cliff face and hopefully avoid some of the growing number of ‘sunset watchers’. 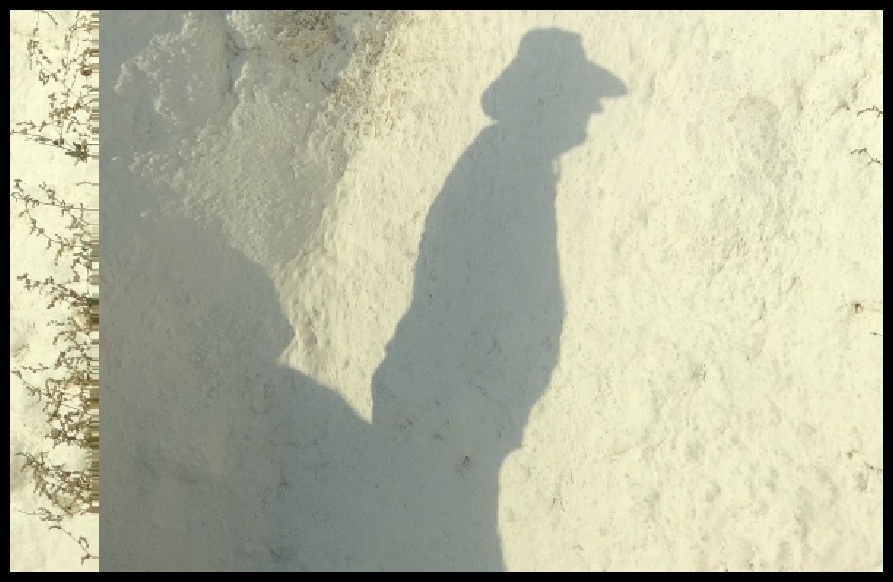 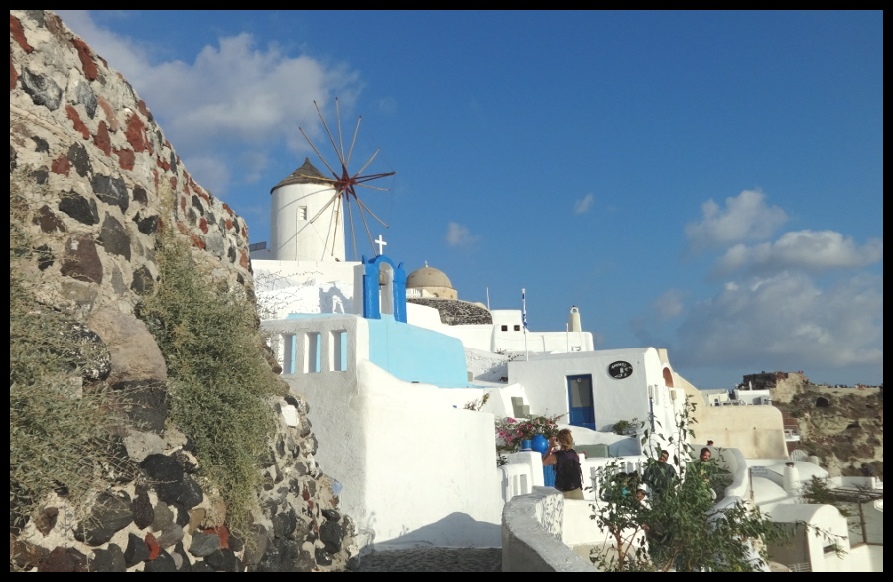 BELOW : Ok Eddie, you can lock it in !    Like many others, spread over many parts of the cliff top and cliff faces, we are pretty sure we have chosen the best vantage point to view the sunset. Only time will tell who got it ‘right on the night’.

BELOW : All this walking has left me just a shadow of my former self !  (All be it, a FAT shadow, but still a shadow.) 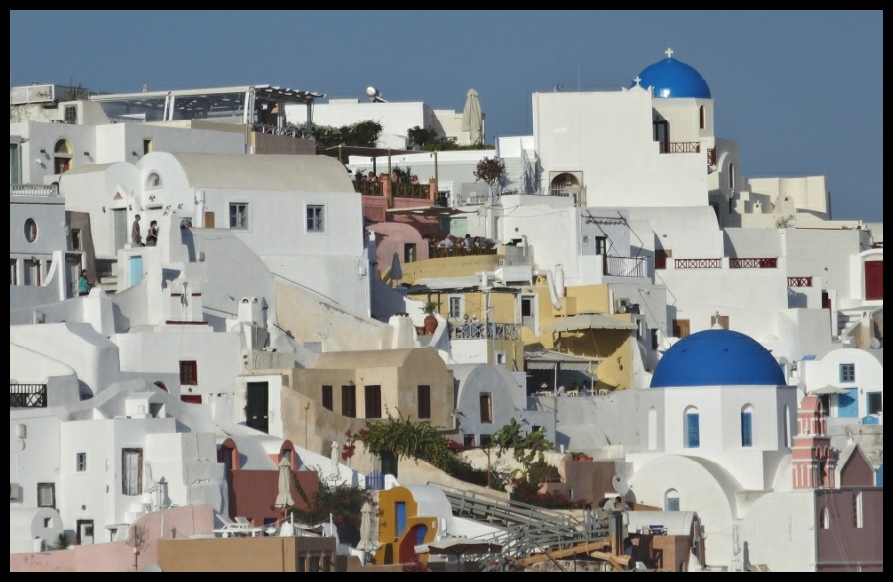 BELOW : The ‘blue domes’ of little chapels and churches dotted across the cliff tops and cliff faces, is a constant reminder that you are in Greece. (In case the fact that the locals are speaking Greek escapes you.) 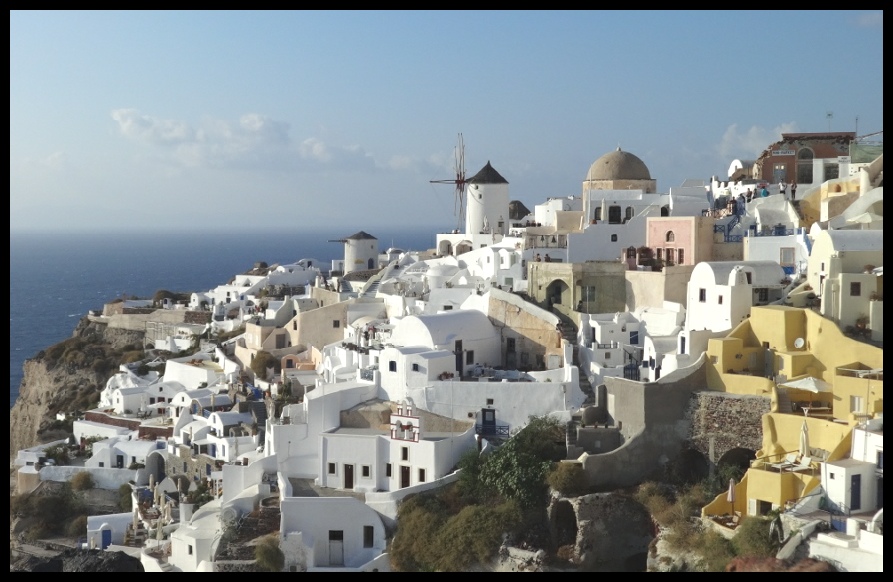 BELOW : The time for sunset is getting closer, so we are going to make our way down to a location a little below the top windmill in this photo. 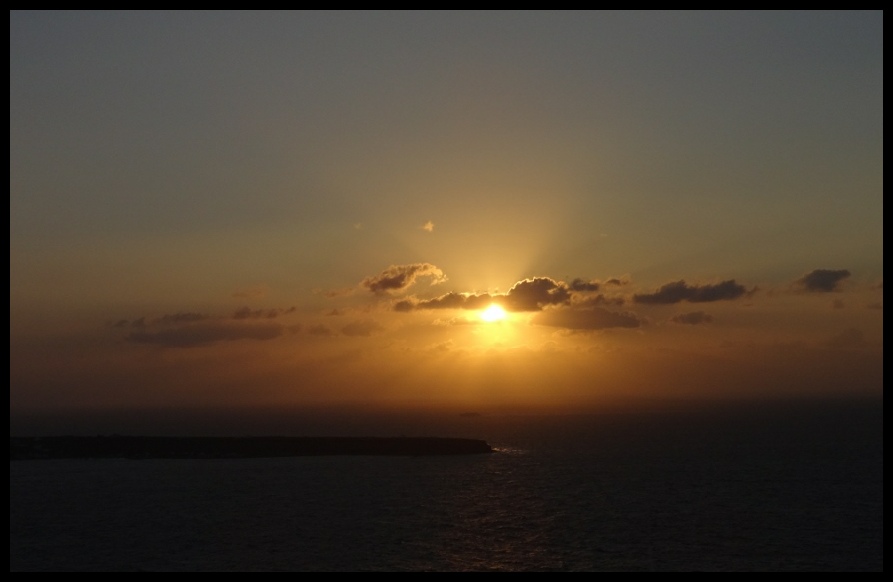 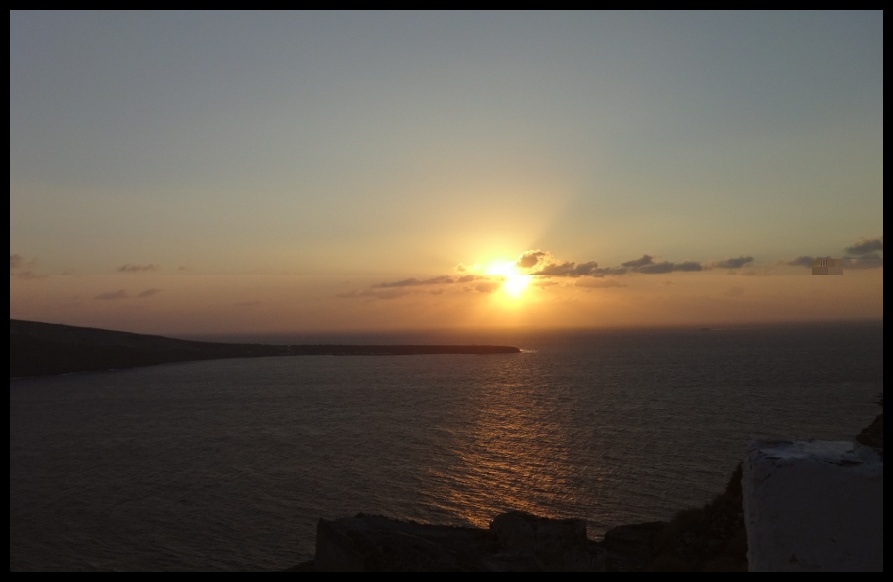 BELOW : Finally sunset comes, and once again we are not disappointed by the beautiful descent of the sun into the almost clear horizon.

BELOW : The golden colour again re-affirms the beauty of nature itself, in this ever changing world, nature continues to assert its influence on our daily  lives. 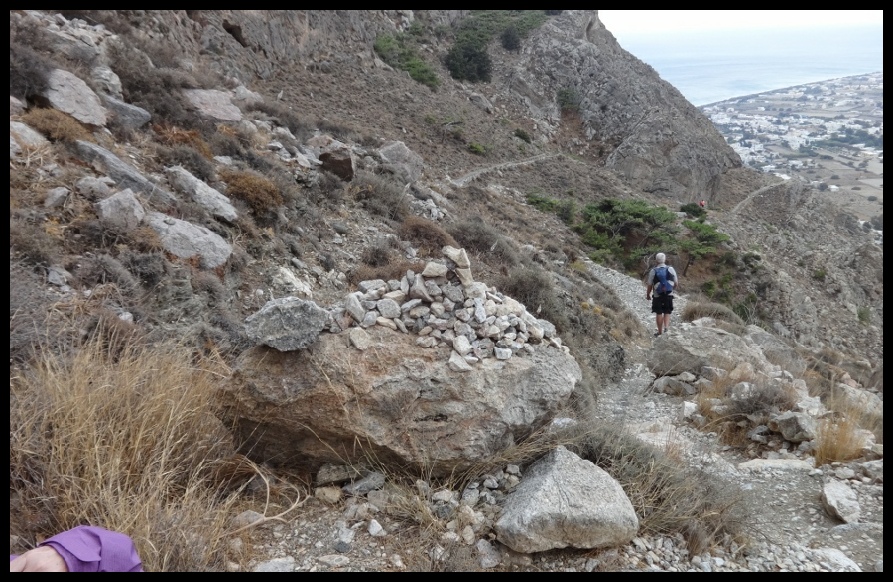