BELOW : Some of the local men chatting, while on ‘supervision duty’ at the park. 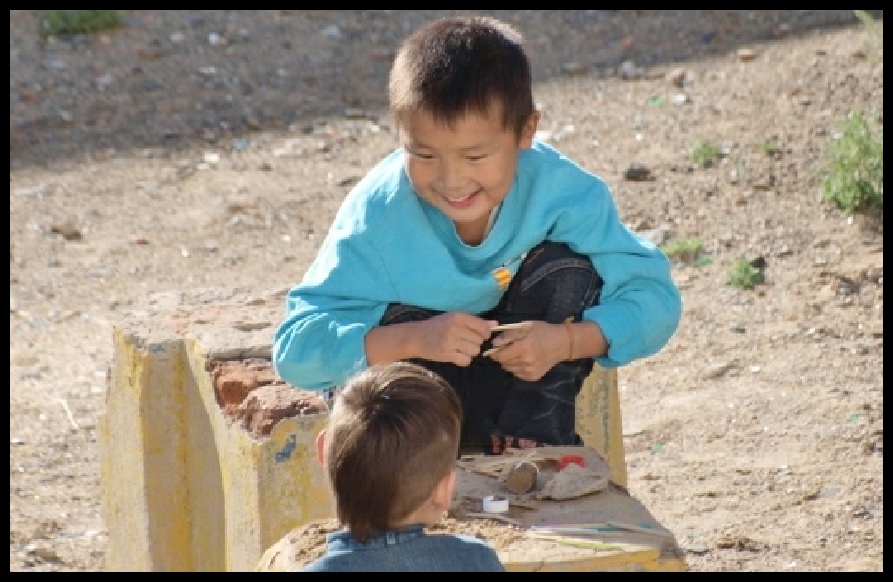 BELOW : The smile says it all. 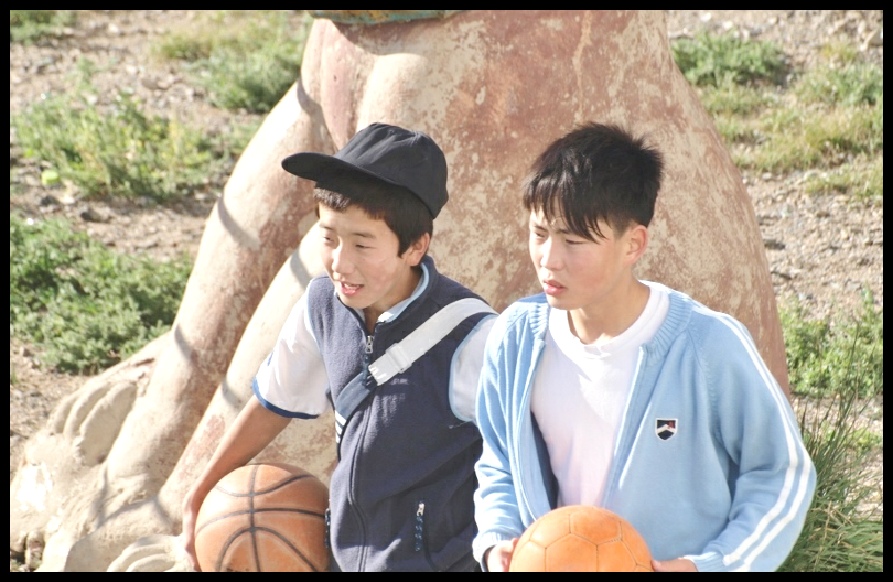 BELOW : This building is what I could see if I looked to the right from my bedroom window. This one has had a gable roof added. it was originally a flat roof building (like the one you can see on the left) they were, in fact, identical.

BELOW : This view shows the end of their building.(Their 3 windows again highlighted in yellow) Again, there is an identical building built adjacent. These were all built during the years which the Soviets ruled in Mongolia. 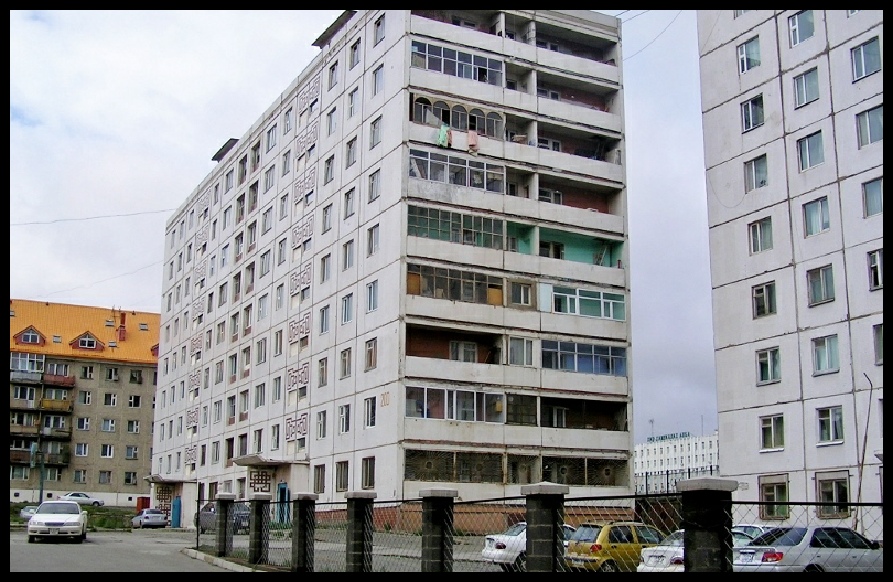 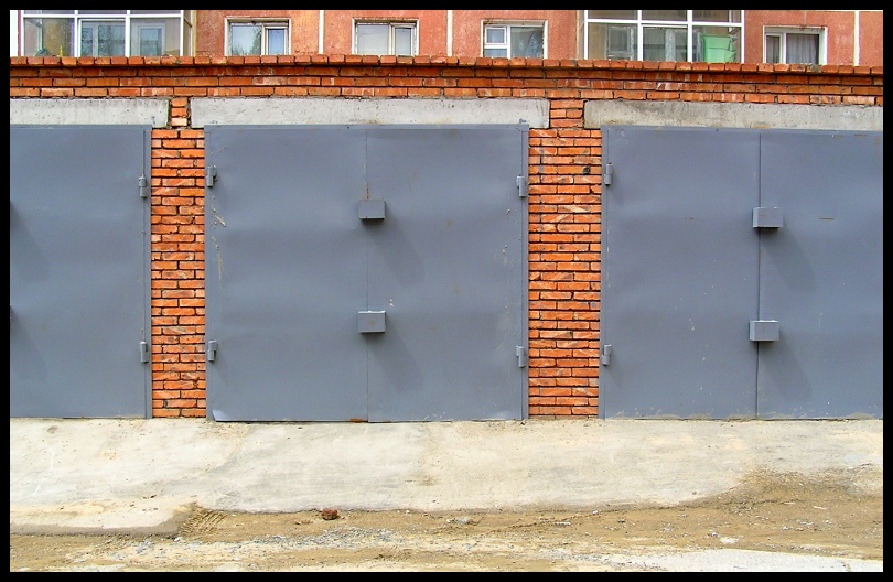 BELOW : Because very few people owned cars when these apartments were built, there were no garages included in the buildings. Garages have started to appear in various forms around the area. 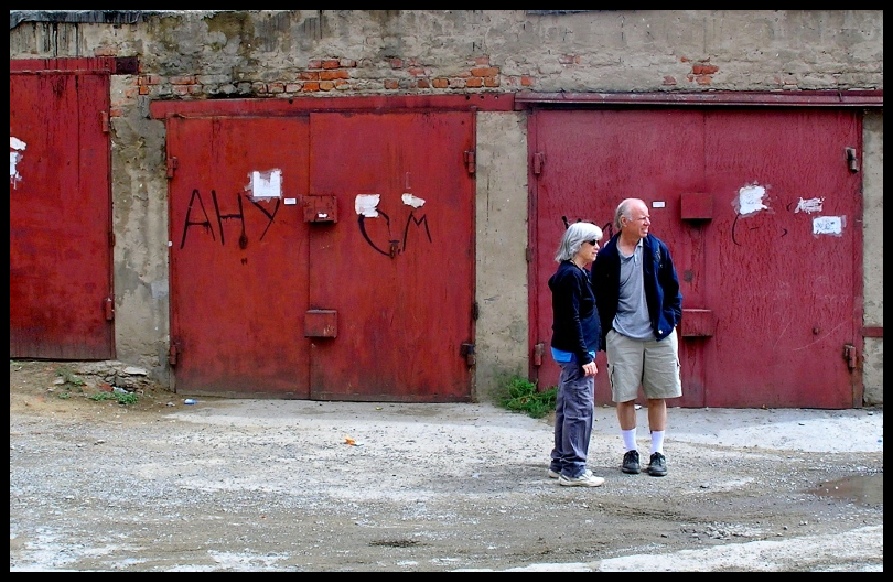 BELOW : Some are older than others. 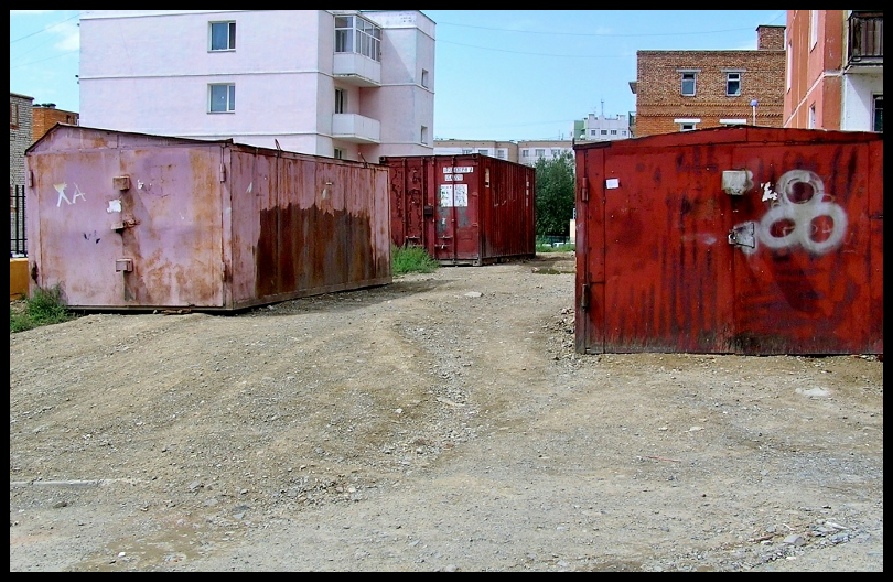 BELOW : And some are old shipping containers, adapted to do the job. I did see a man one day park his 4WD vehicle in a container. To exit the vehicle he had to climb from the driver’s seat, over the passengers seats and then into the back storage area of the vehicle, and out the rear door ! 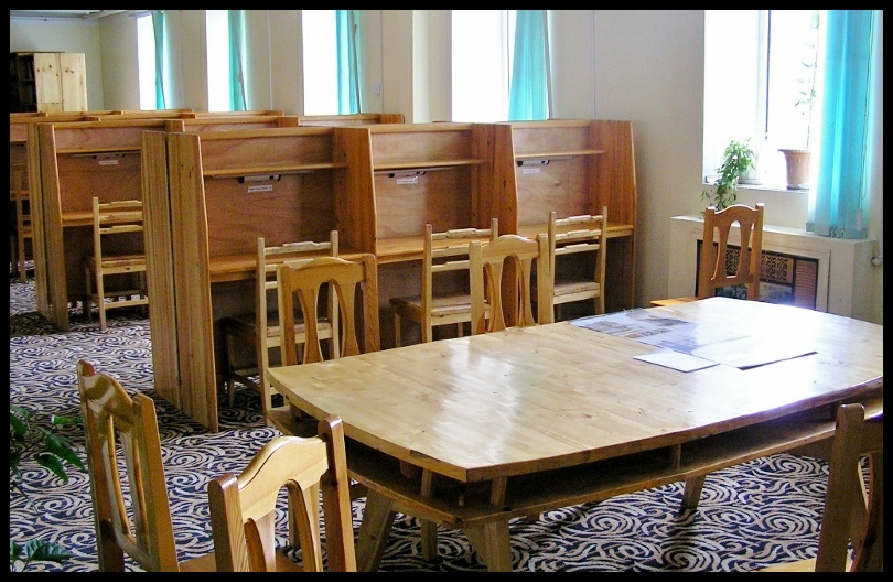 BELOW : This is one of the study areas in the library, at the Bible College. 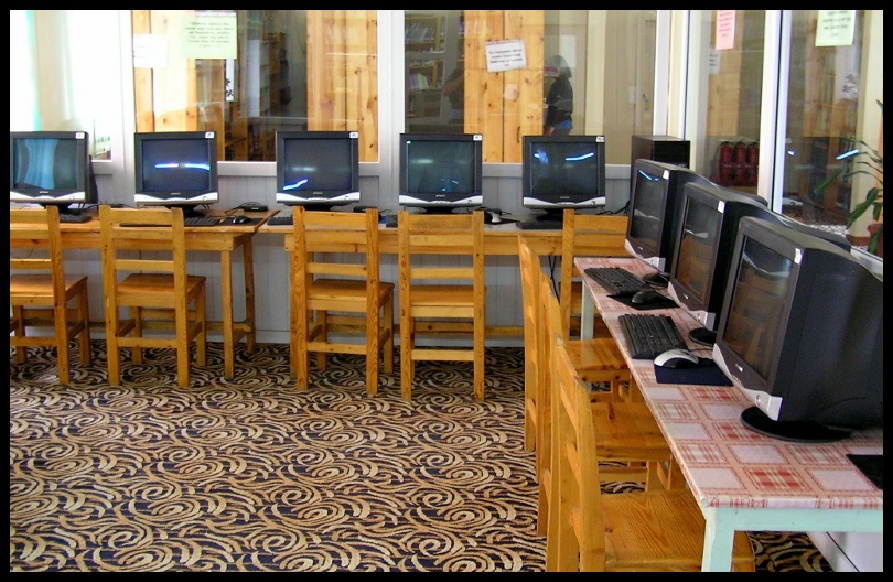 BELOW : This is the computer room at the Bible College, and beyond the glass you can see bookshelves in some of the library area. 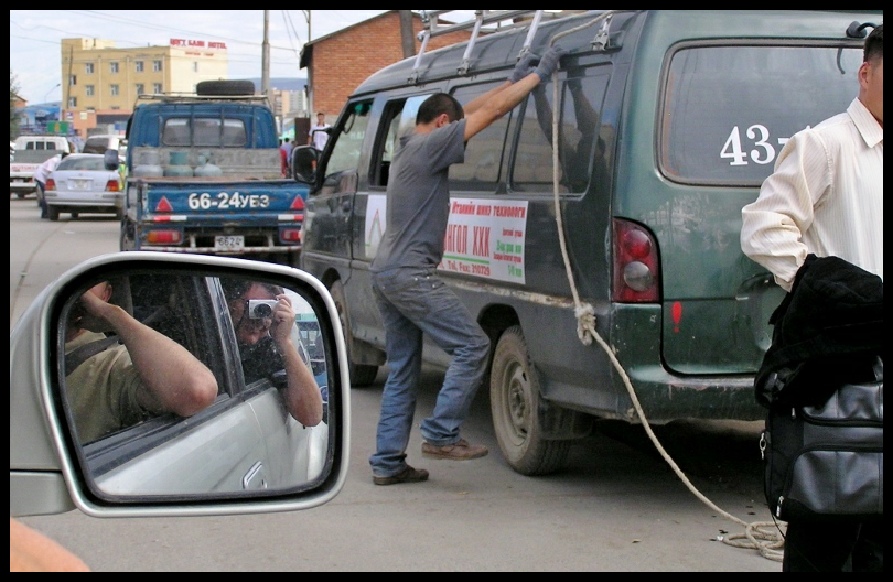 BELOW : This guy was securing part of his load to the roof-rack. 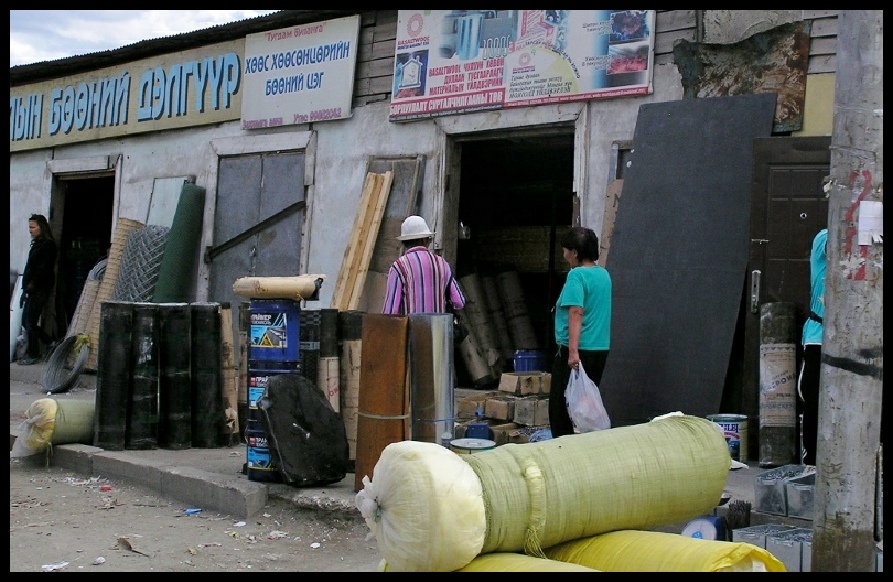 BELOW : We were driving around town one day and passed a number of ‘hardware’ type shops. 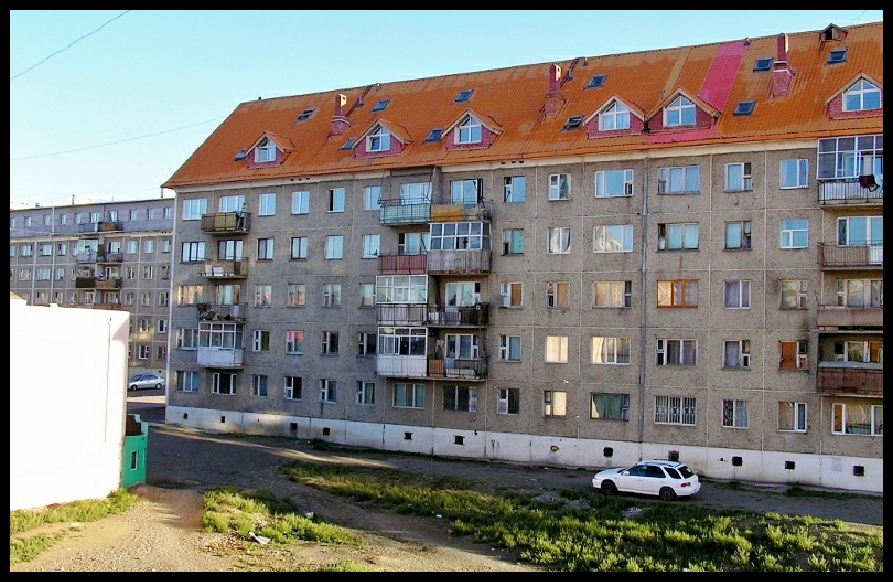 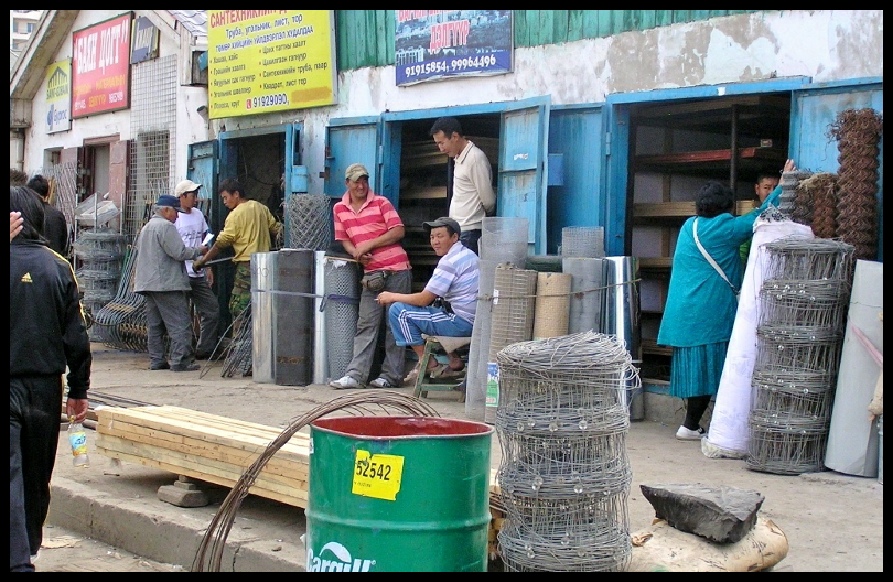 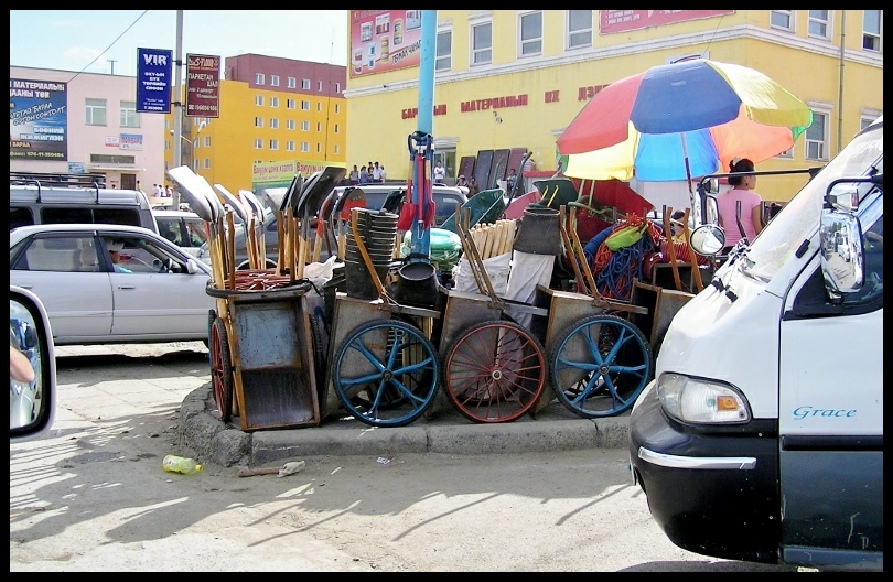 BELOW : Some fencing wire.

BELOW : This was very upmarket, a new building with modern shelving and racking, most unlike the austere shop fittings you would find in the more traditionally Russian based businesses. 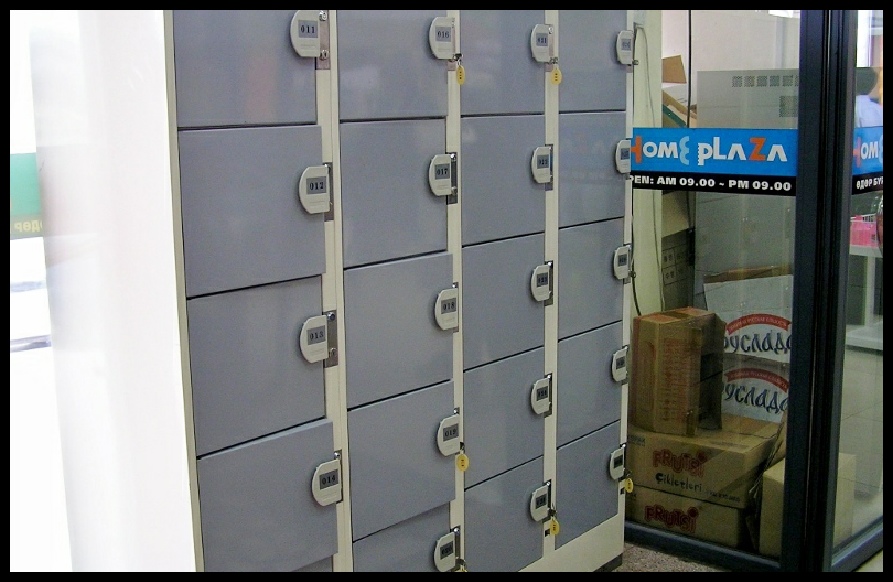 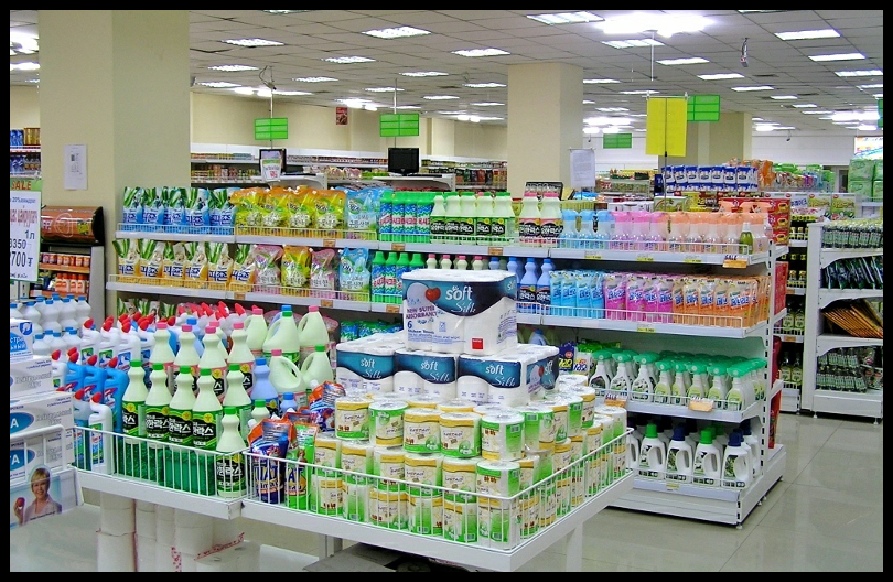 BELOW : These are lockers outside the entrance to the local Korean owned supermarket. You were not allowed to take bags or backpacks into the store. It was fairly new, and spread over 3 levels. Unfortunately, after a few minutes I did get asked to stop taking photos by a staff member. 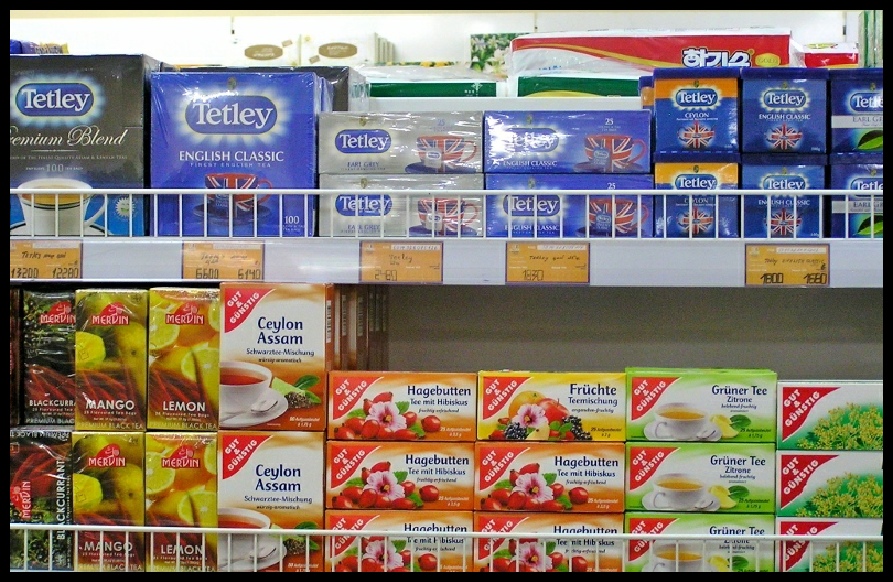 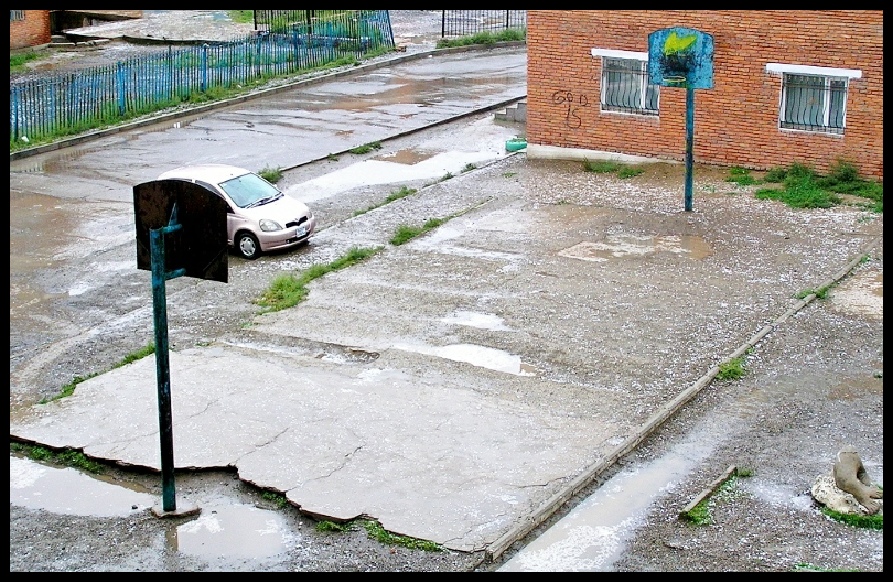 BELOW : I found one familiar brand on the shelves.

BELOW : On the last day before I left, in the morning there was a very rare hail storm, which lasted about 20 minutes.

BELOW : The ride down the slippery-dip would have meant receiving a very cold behind if you did not stay upright when you reached the end of your slide. 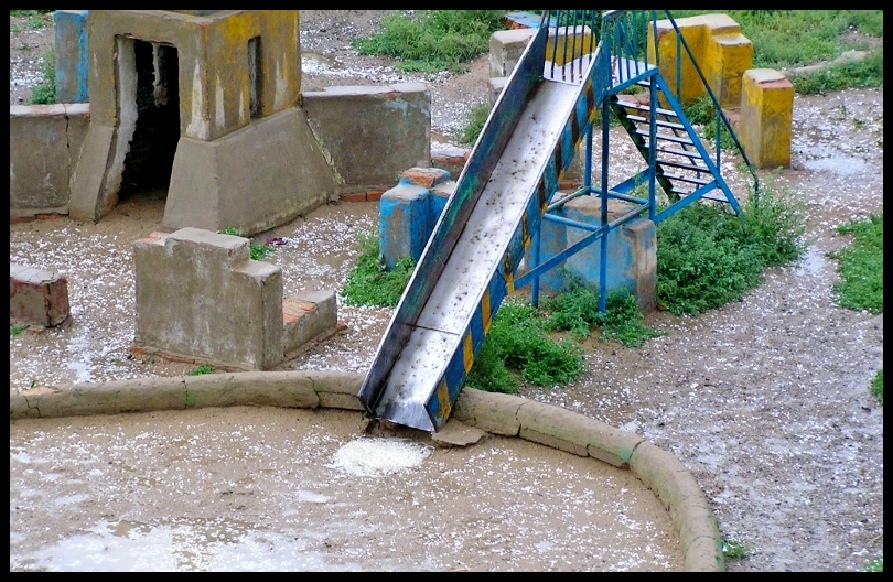 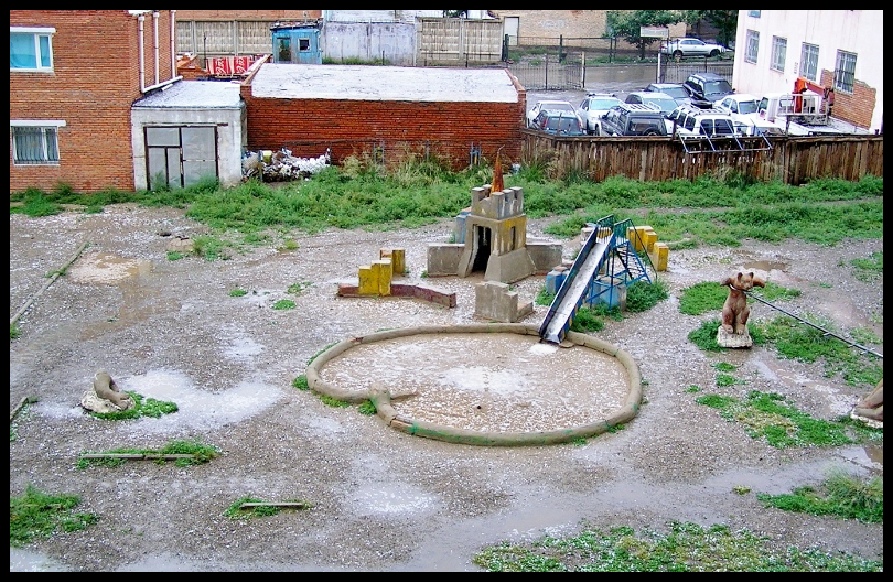 BELOW : The park was covered with little areas of white balls. 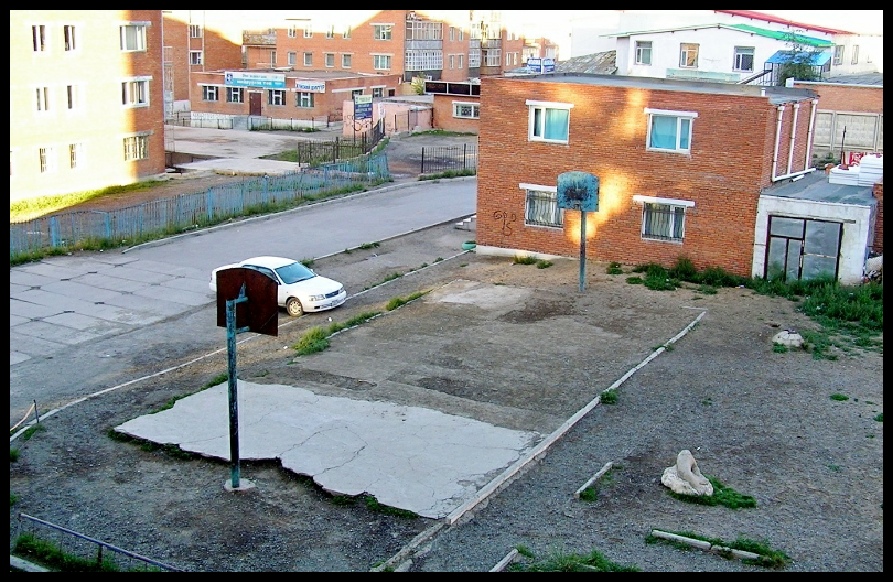 BELOW : This photo was taken from the bedroom I was staying in at David & Wendy’s apartment. There was a small park and basketball court directly outside their building. A corner store and chemist were also just around the corner. As you can see, only part of the court is concrete, most of it is just gravel. 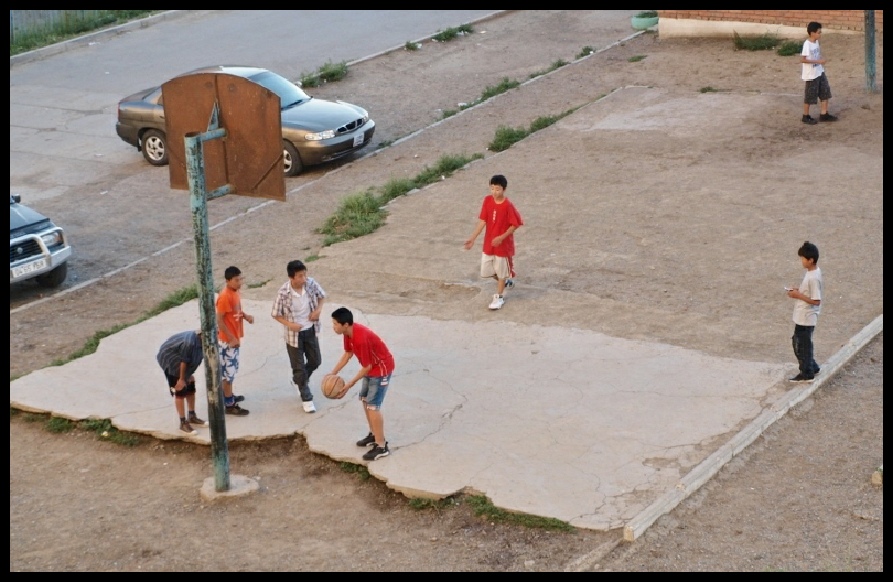 BELOW : Local children do make use of the facilities, and of course adapt as required. One of the causes for the concrete breaking up is the severe winter temperatures of MINUS 35 degrees. The life span of the concrete is greatly reduced when exposed to such cold temperatures.

BELOW : The local children still make use of the clear late summer day to burn off energy. 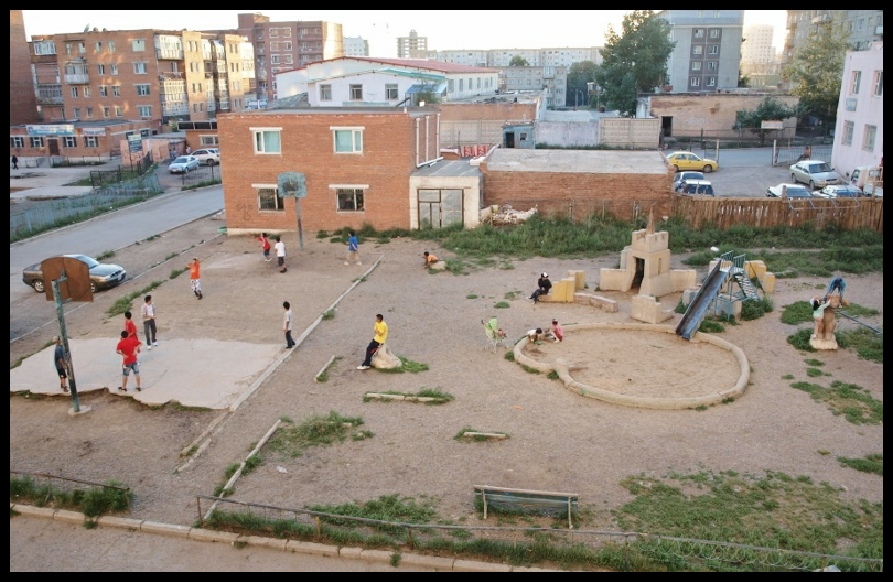 BELOW : The park is basically gravel, and the apparatus are all very old and basic. This part of town is part of the old Russian influenced architecture, and the austerity also shows in the park as well. 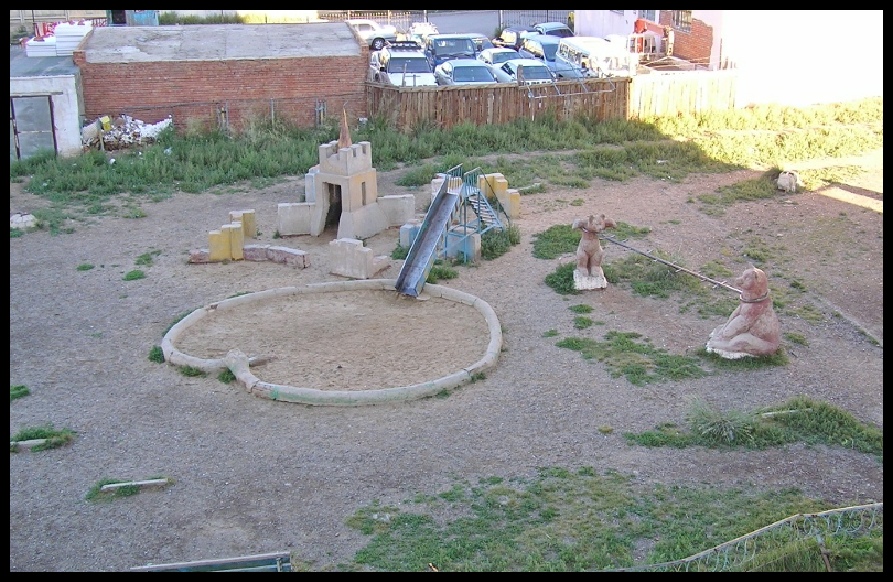 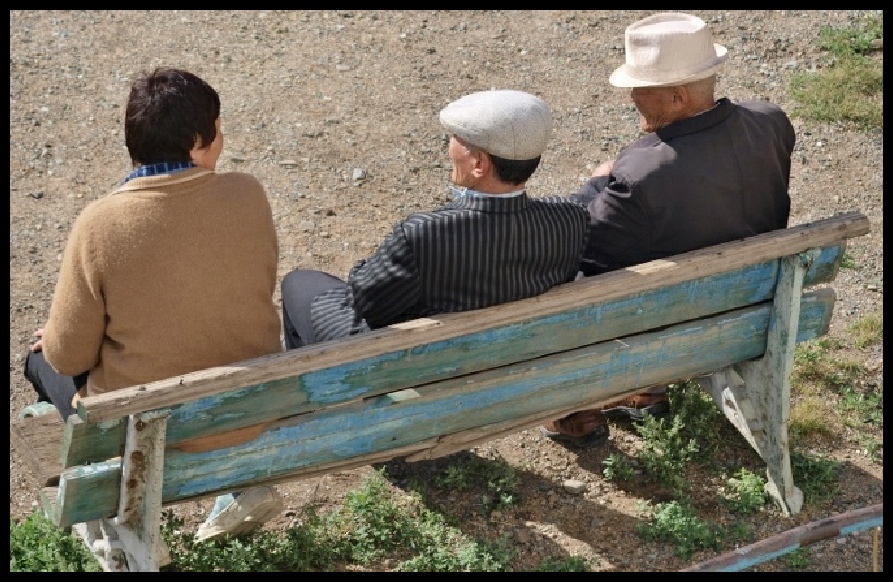 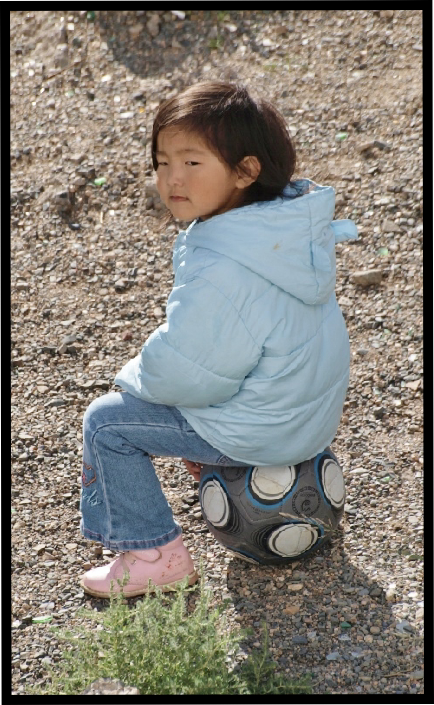 BELOW : Children are children, no matter where in the world you find them. 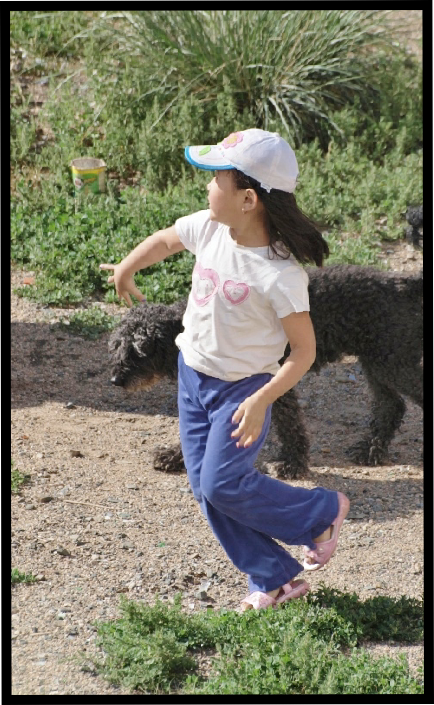 BELOW : This is a front on view of David & Wendy’s apartment building. The third floor was where they lived, (highlighted in yellow)  The right hand window was the kitchen, the middle was the lounge room and the left was the bedroom I stayed in. D&W’s bedroom faced the other side of the building. 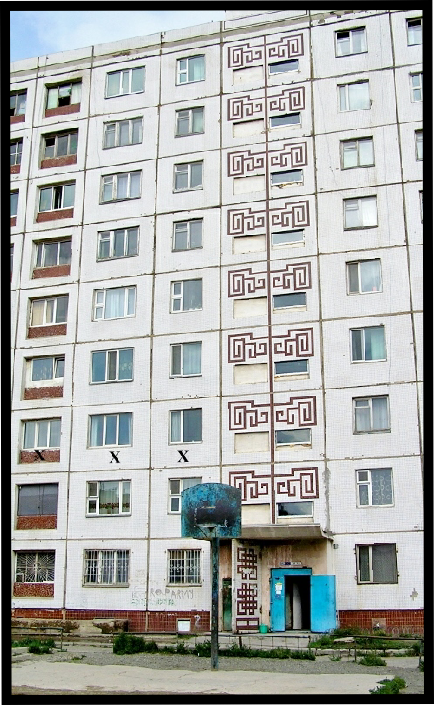