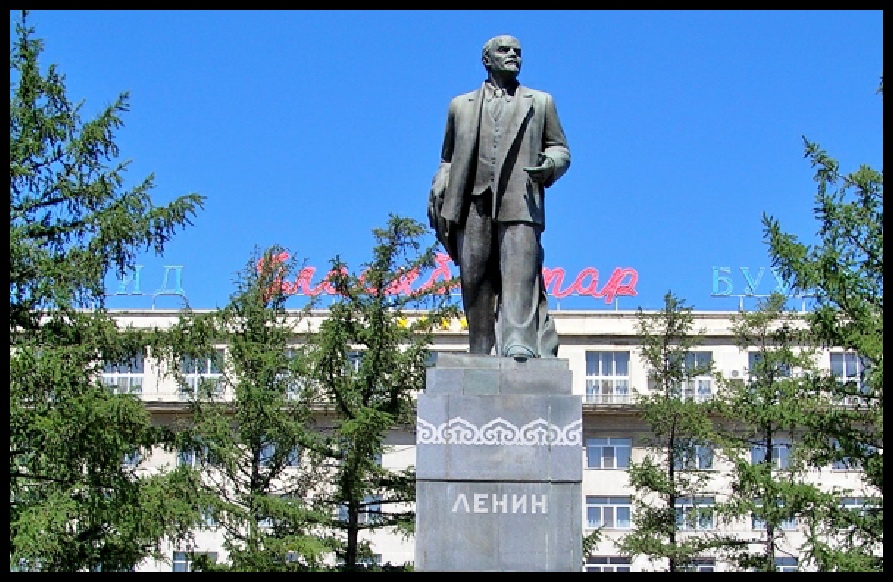 BELOW : This bronze statue of Vladimir Lenin was erected in front of Ulaanbaatar Hotel in 1954. The Russians ruled Mongolia from 1921 until 1990, when the Mongolian people first had a democratically elected government. A decision was made in 2012 to part with the 4 metre high relic of Soviet rule, as the country is now firmly based on democratic self rule. 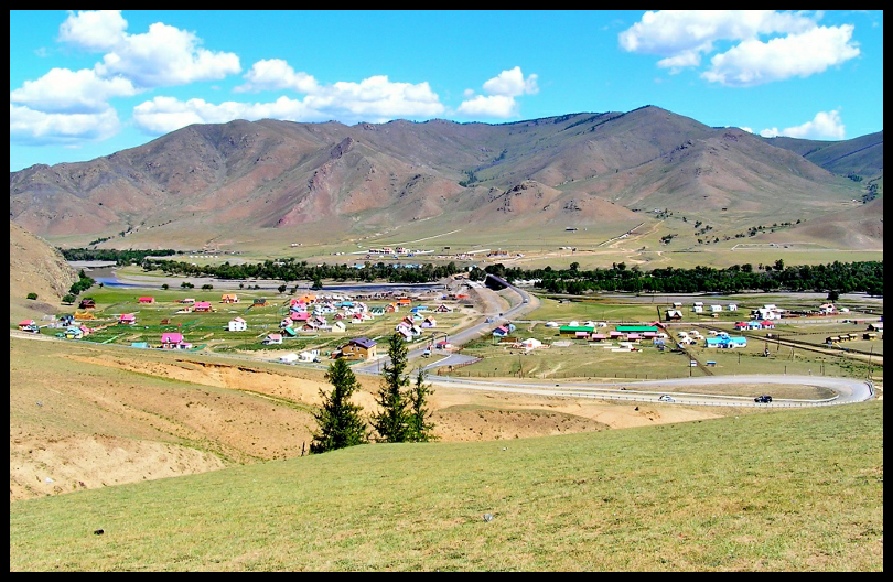 BELOW : The entrance to the National Park is within sight. We can see the tourist camps which are just inside the park. There are a combination of wooden buildings and the traditional felt tents, known in Mongolia as a ‘ger’. (Similar to a ‘yurt’)

BELOW : A view of the Tuul River, and a new bridge being constructed to raise the height, due to previous wash-outs of the existing lower level bridge. The red arrow indicates the entry point to the National Park, where each occupant of a vehicle must pay their entry fee.

BELOW : A closer look at the tourist camp accommodation. The circular shapes are the felt tent (gers). 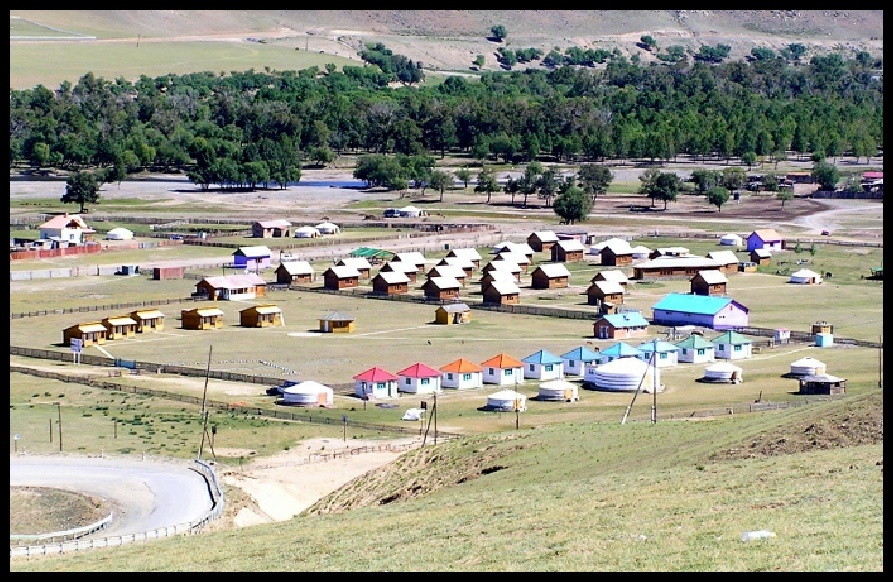 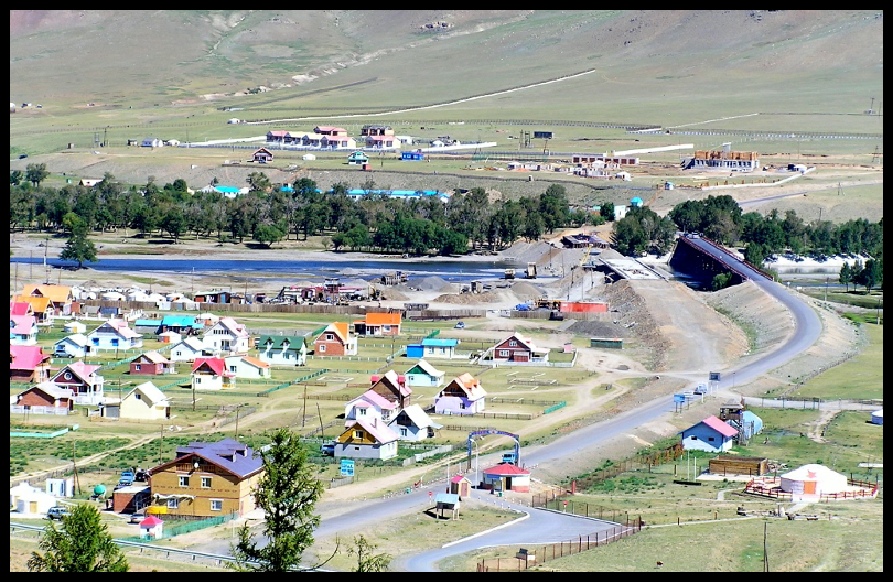 BELOW : This is the ticket issued at the entry point. You will notice that the cost is shown below the eagle in the lower left, 3,000 Tughriks (AUD $1.95) and below is the reverse side of the ticket which explains what services are provided as a result of this fee being collected. 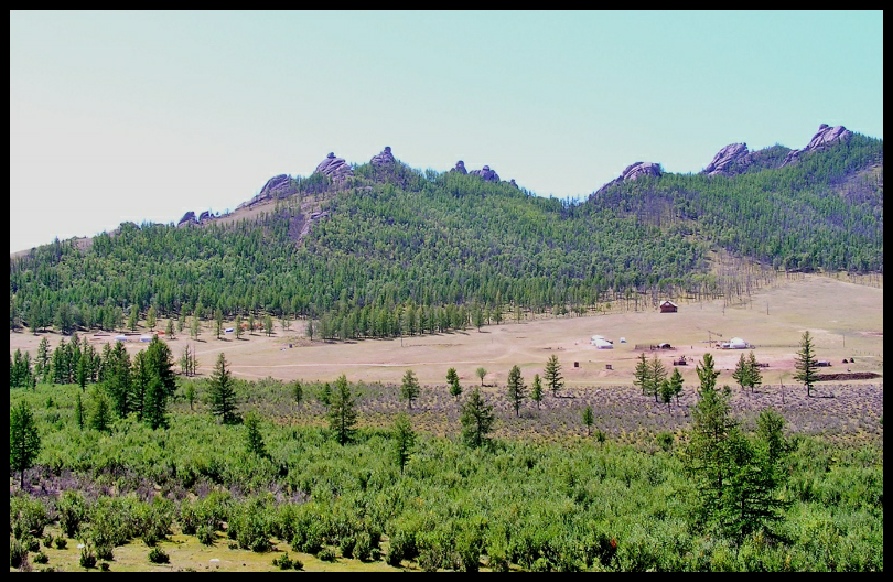 BELOW : We are now further inside the National Park and despite the vision of this photo, the terrain is not all that heavily inhabited by trees. A lot of the land is not covered by much growth at all. 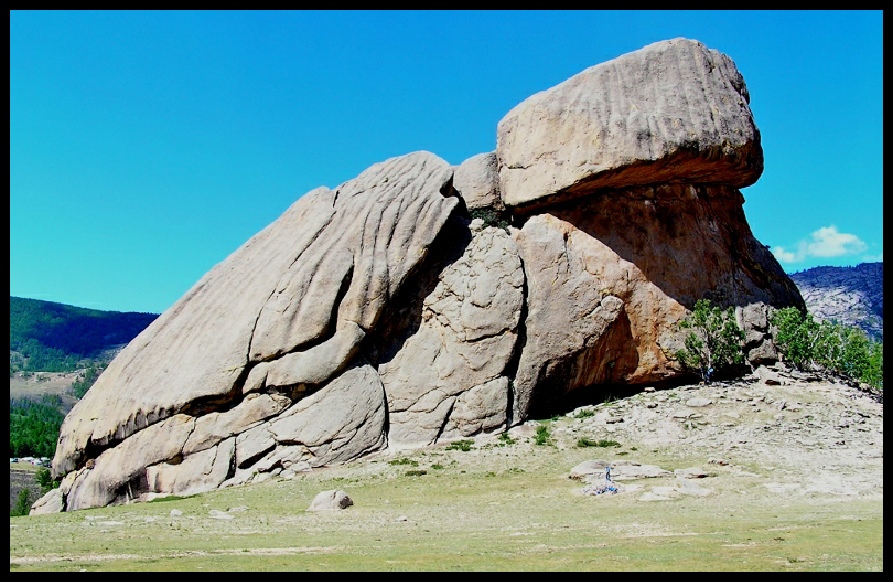 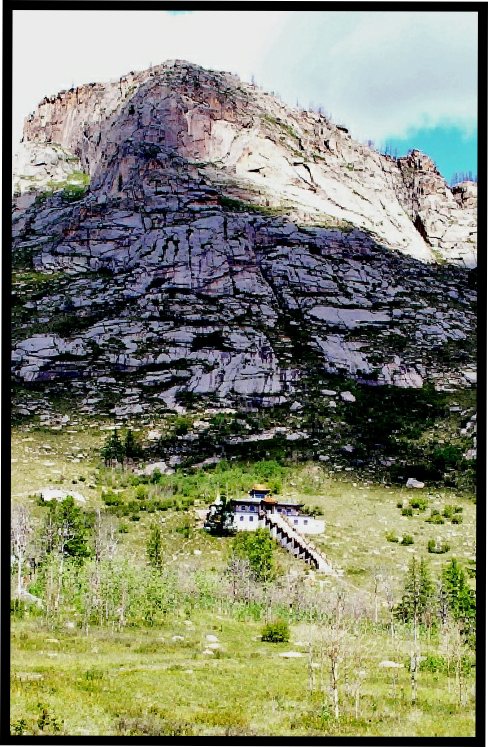 BELOW : High on a hillside, and at the base of a steep cliff face is a Buddhist Temple. They were often built in such positions to allow the monks an easy view of approaching ‘visitors’. 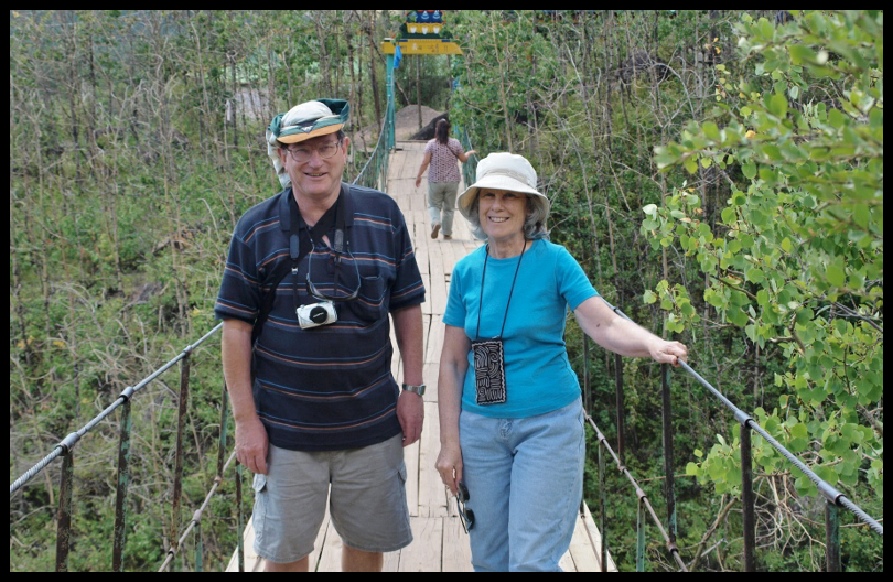 BELOW : In order to reach the temple we needed to cross a ‘swing bridge’ before we began the final ascent up the long staircase. That’s our guide in the background, I don’t think she thought we should put the bridge to the test by having all four of us on one area of the bridge. (David behind the camera) 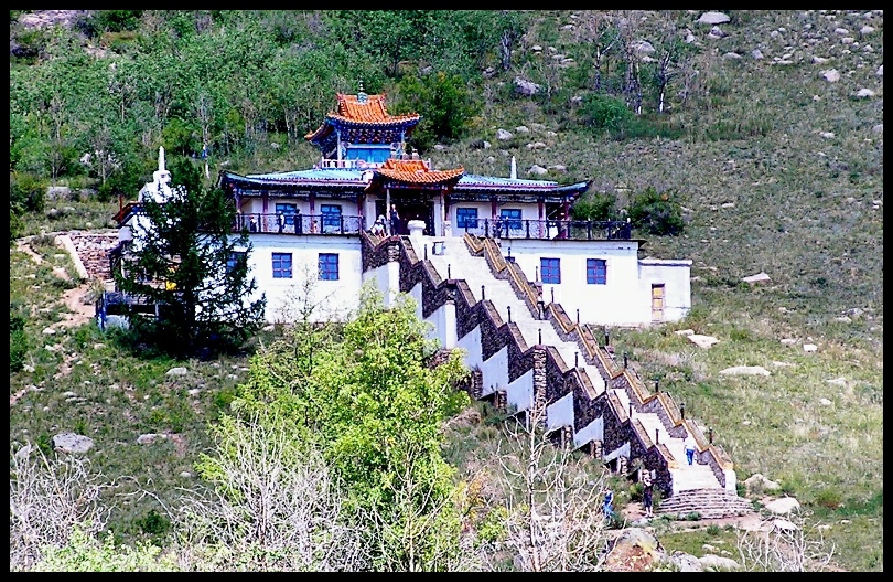 BELOW : I did mention there were a few stairs didn’t I ? 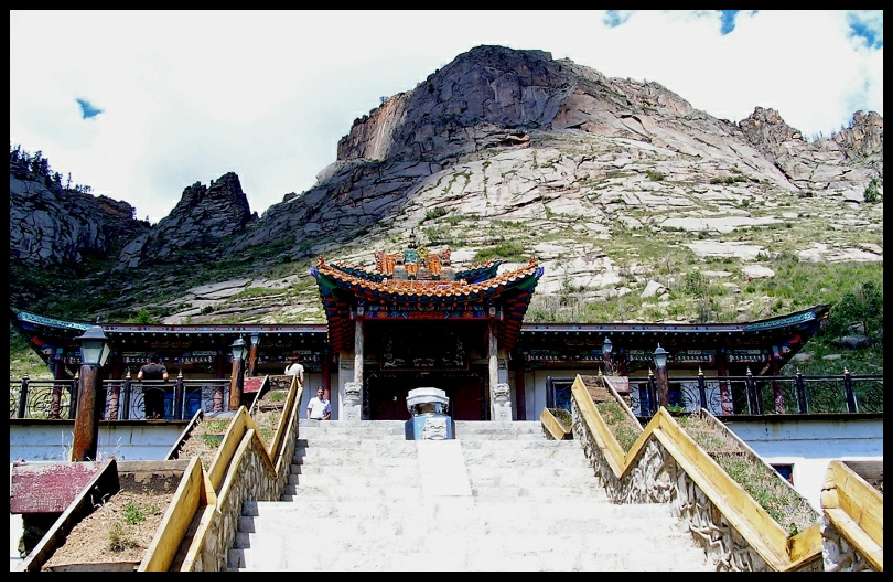 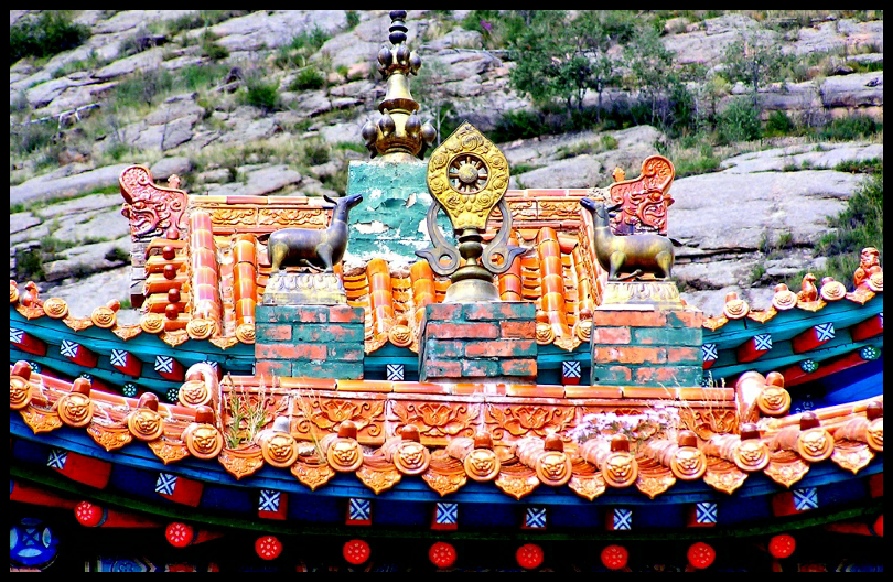 BELOW : That colourful roof above the entry door of the temple. 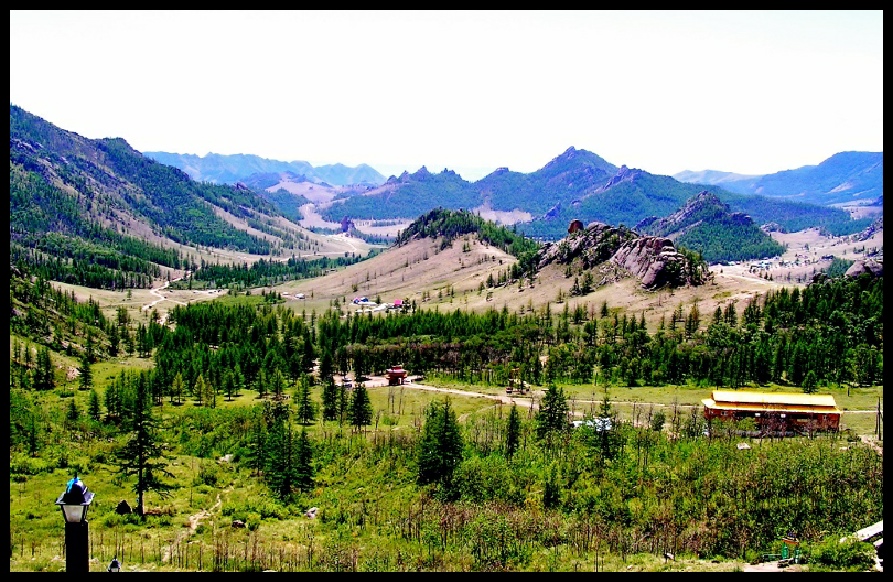 BELOW : BUT . . If you turn around when you get to the top of the stairs . . This is part of the vista that you are able to see. The red arrow is pointing to Turtle Rock. 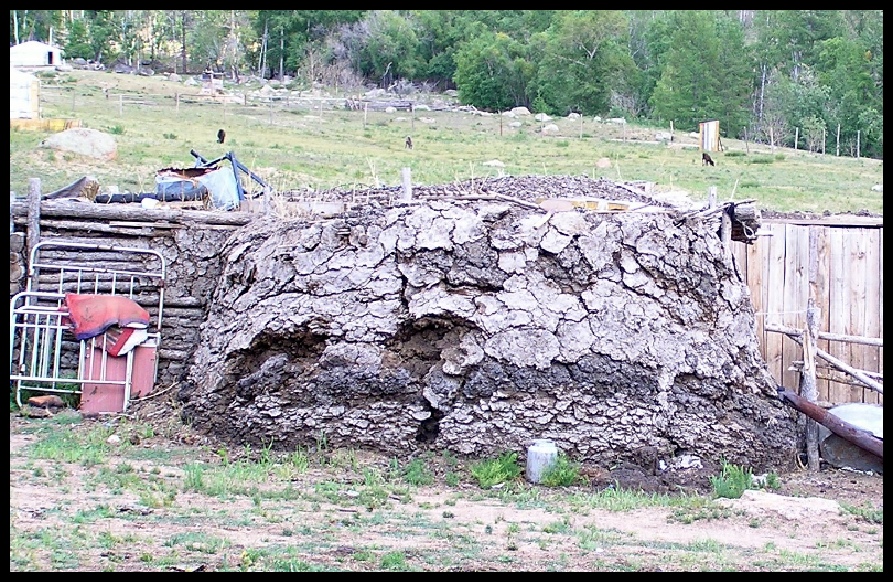 BELOW : This is the ‘fuel supply’ used to fire up the stove in the ger, provided thanks to the efforts of local horses, cows etc. Once their droppings are dried out, they are ready to be recycled !

BELOW : The table above is over there on the right. The family ger is mid photo, and the fence is part of the horses stables area. You can also see the satellite dish which provides TV reception, even in this somewhat remote location. 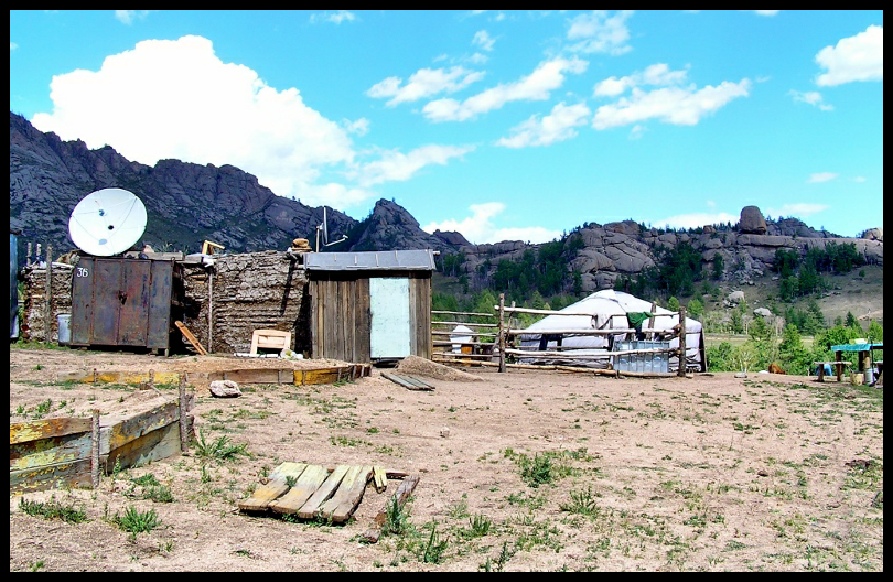 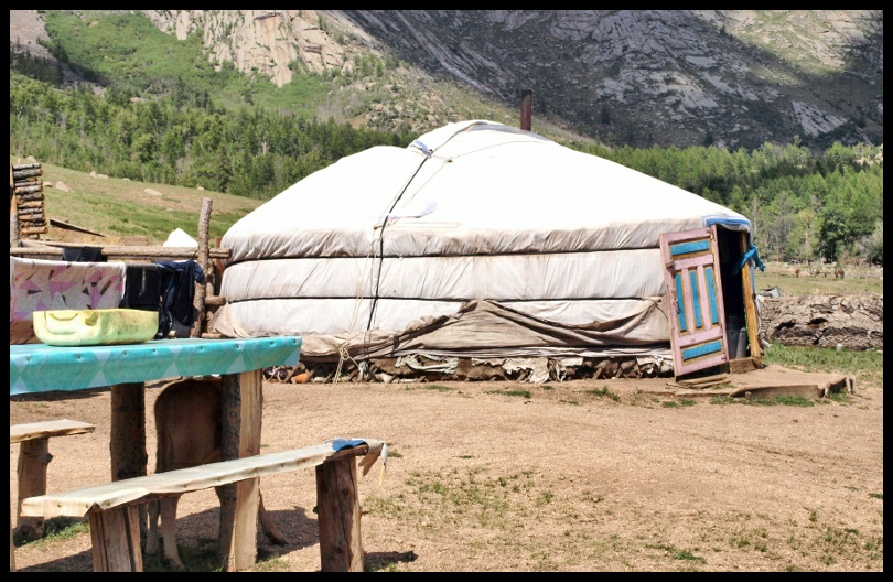 BELOW : They have an ‘open door’ policy for the family ger. The outer covering has been folded up a bit at the bottom during the day, to allow for a bit more ventilation on a relatively warm late summer’s day. 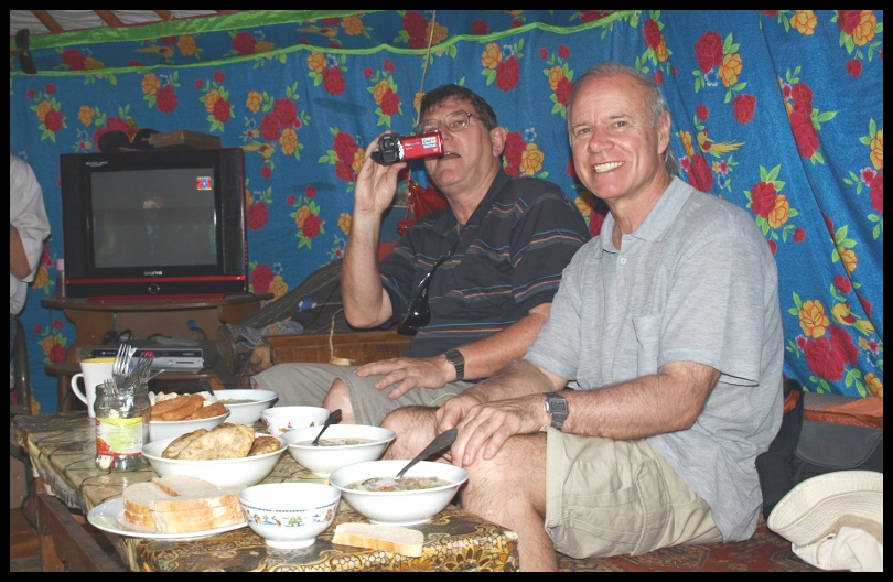 BELOW : Inside the ger we are provided a lunch which consisted of bread and soup and some hot meats, quite a substantial meal for the hardy day trekkers. The inner wall of the tent is lined with a colourful material. You can also see the TV and video recorder in the background. 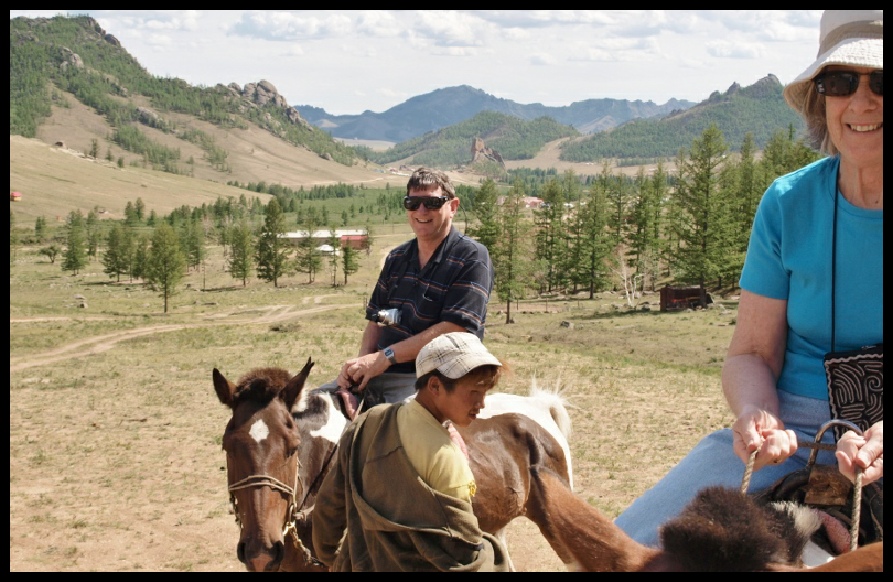 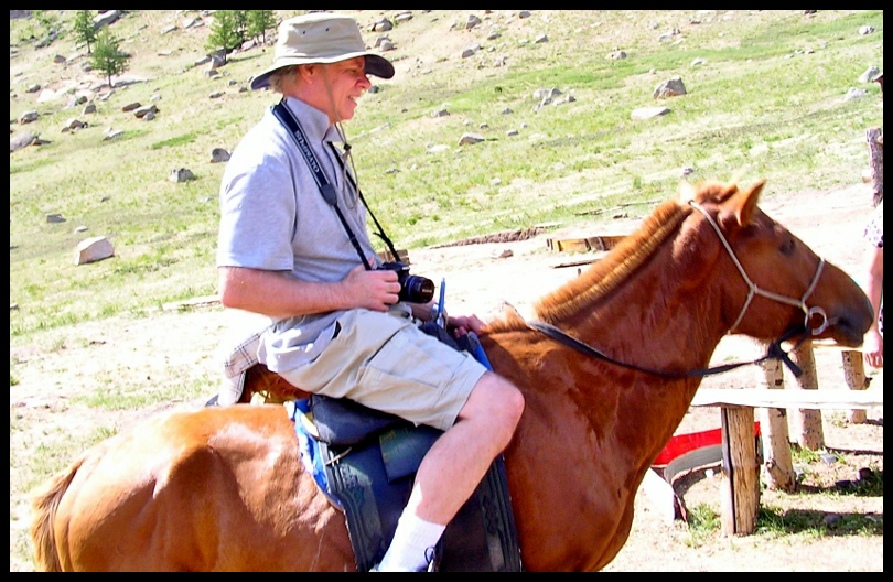 BELOW :We look like we were born in the saddle don’t we ?  I think my horse is a bit jealous that he got me instead of Wendy, he would not have had such a heavy burden to bare, if that had been the case !

BELOW :David is also looking like a natural . . Even though this was his very first time on a horse.

BELOW : After our horse ride we returned to the family ger again, to share in a lovely afternoon tea which included a very tasty homemade yogurt with a beautiful lemon tang to it . 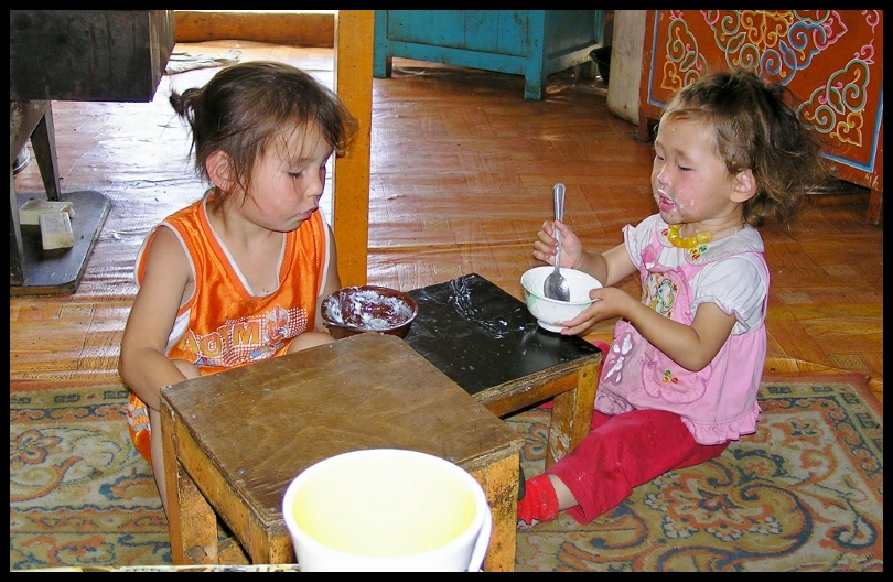 BELOW : When you get to the top of the stairs and look inside, this is part of what you can see. 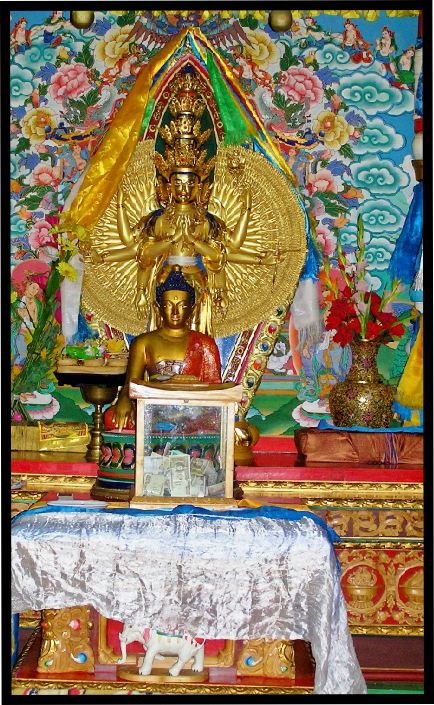 BELOW : Part of our tour included lunch and afternoon tea with a local nomadic Mongolian family. The gers here are those owned by adjoining families near our host families lodgings. We are still within the National Park for this activity, and for all the photos that follow on this page. 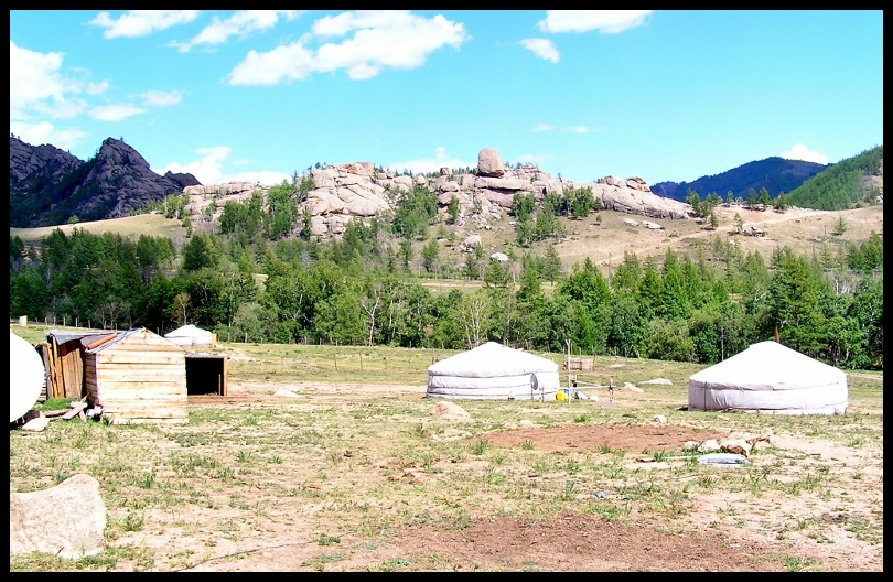 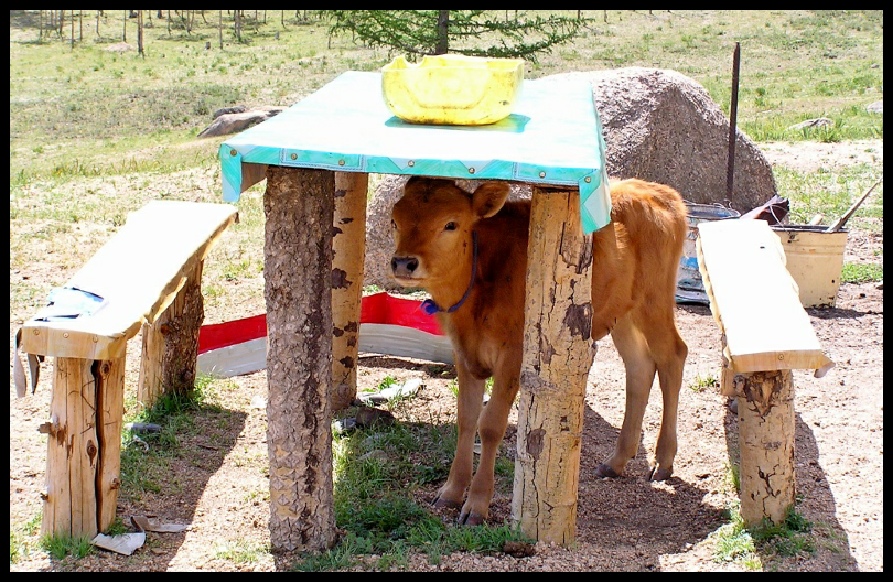 BELOW : When the weather is fine the family can share meals around this outside table. This calf thinks that it has found a good place to be, protected from the sunshine.

BELOW : The National University of Mongolia (NUM) was established in 1942, and is the oldest university in Mongolia. During the socialist rule it served as a training centre for the party elite. Education was paid for and strictly controlled by the state. After 1990 it was opened up to be a more modern university offering places to a wider range of students from Mongolia, and also some international students. 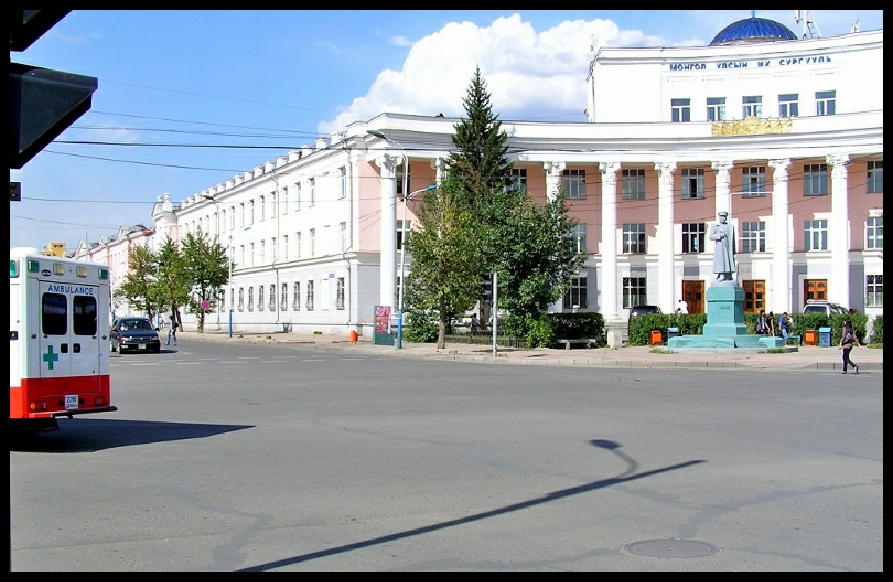 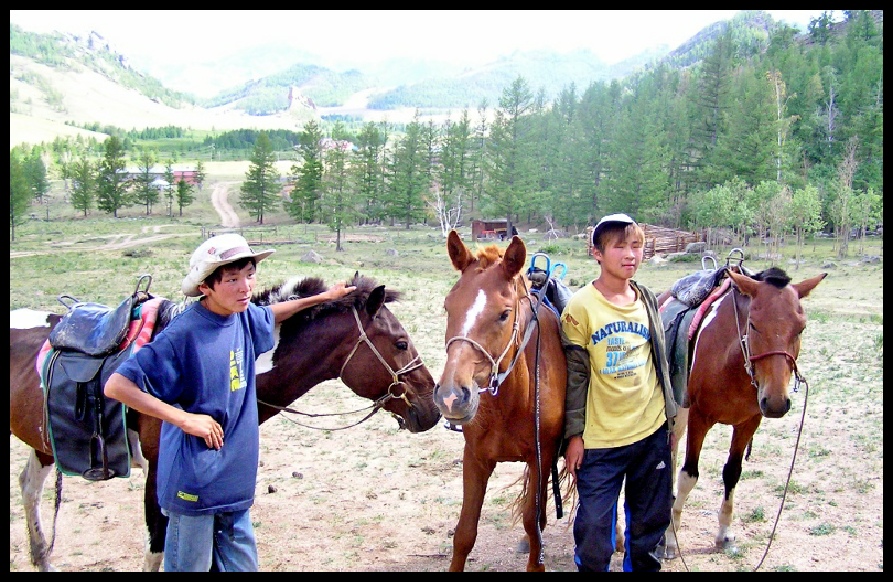 BELOW : After lunch we were taken on a horse ride, by a couple of local boys who are part of a thriving tourist trade. 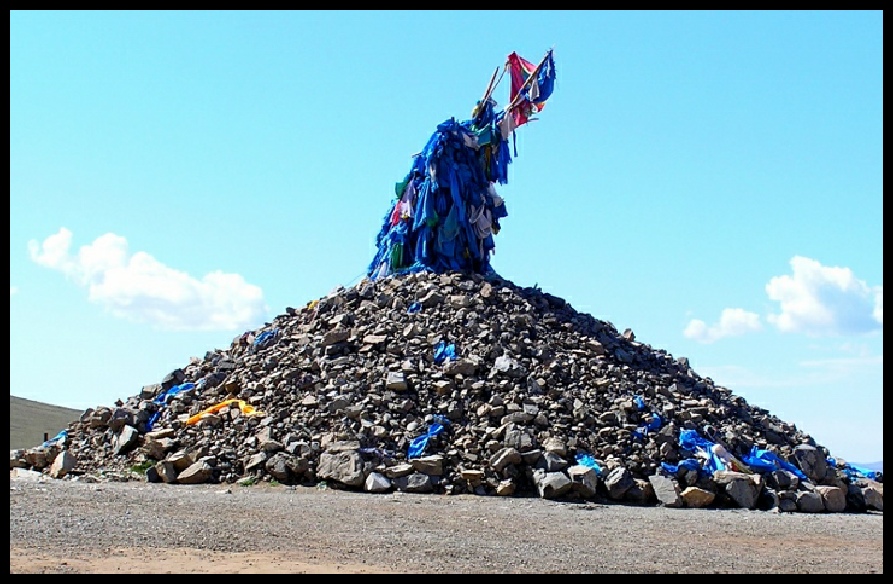 BELOW : Today we are travelling to Gorkhi-Terelj National Park, about 50-60 km N.E. of Ulaanbaatar. To get there we have hired a car (driver included), and a guide. We travel about 37km on a sealed road and then the remainder is dirt. Along the way we pass a number of these ‘ovoo’.  They serve mainly as Tengriism religious sites, used in worship of the mountains and the sky as well as in Buddhist or Shamanist ceremonies, but often are also landmarks. Almost all researchers say that originally all ovoo were made from holy woods, and to this day they must include wood elements inside of them. 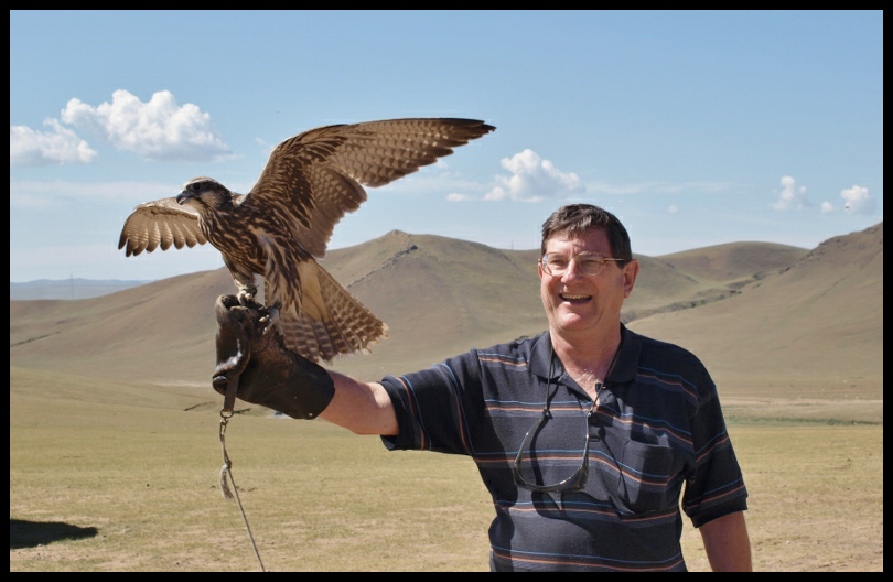 BELOW : A bird in the hand (Golden Eagle) is worth one in the approach to a National Park. 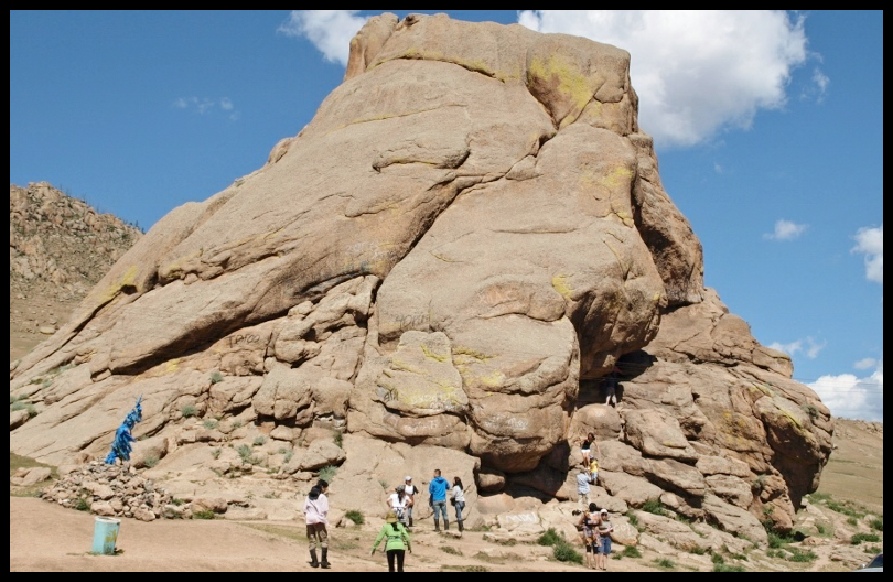 BELOW : This rock (which had a very large cave inside) is thought to have saved many Buddhist Monks who hid there when the Russians were trying to purge Mongolian Buddhist leaders in the early years of Russian rule in Mongolia. You can also see another ovoo in the lower left corner.

This is called on ‘ovoo’. When travelling, it is custom to stop and circle an ovoo 3 times in a clockwise direction, in order to have a safer journey. Usually, rocks are picked up from the ground and added to the pile. Also, one may leave offerings in the form of sweets, money, milk, or vodka. If one is in a hurry while travelling and does not have time to stop at an ovoo, honking of the horn while passing by the ovoo will suffice. Traditionally ceremonial blue silk scarves are also deposited for religious purposes.