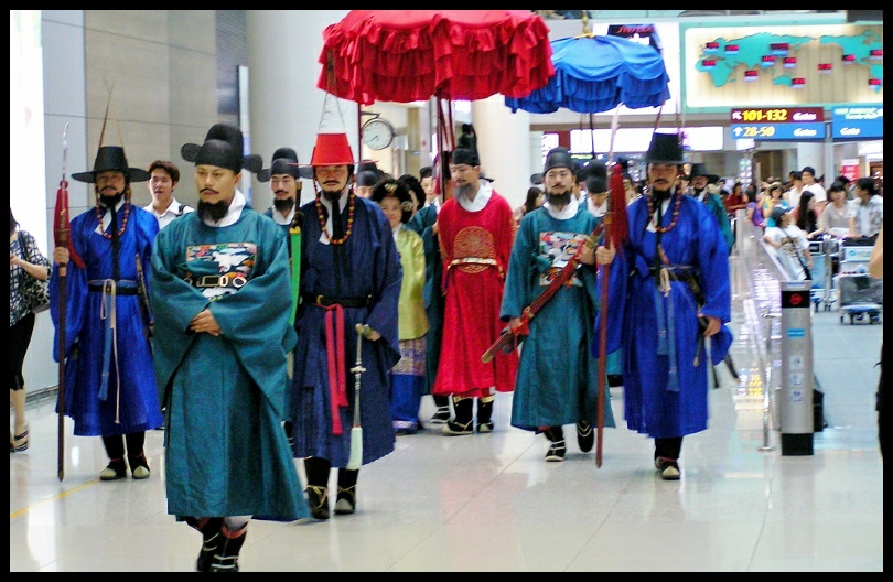 BELOW : On the first leg of my flight to Mongolia, I landed in Seoul, South Korea. This was an interesting sight, INSIDE the passengers only part of the airport. It wasn’t until my return flight that I learned this was simply a bit of theatre organised to demonstrate how the King and Queen used to have ‘public walks’ to mix with the people, in a time gone by. 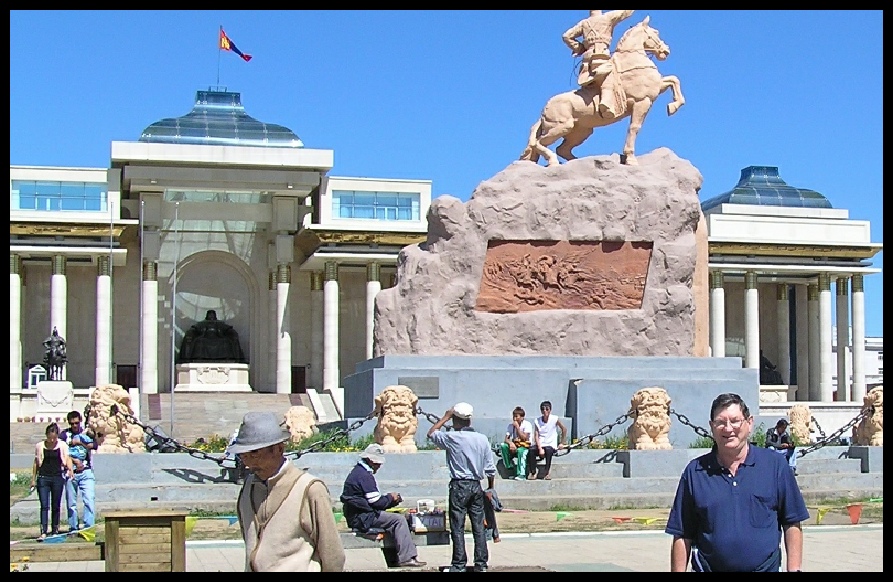 BELOW : The Parliament building in the background, in Chinggis Khan Square (formerly known as Sukhbaatar Square) in Ulaanbaatar city centre. Damdin Sukhbaatar was recognised by this statue, for his role in the revolution in 1921 which declared independence from the Chinese.

BELOW : The space between the statue above and the Parliament building is much greater than it appears in the photo above. This photo better shows the large colonnade monument to Genghis Khan, as well as to Ögedei Khan, and Kublai Khan, and dominates the square's northern side. It was completed in 2006 to mark the 800th anniversary of Genghis Khan’s coronation. (Genghis Khan is referred to as Chinggis Khan by Mongolians) 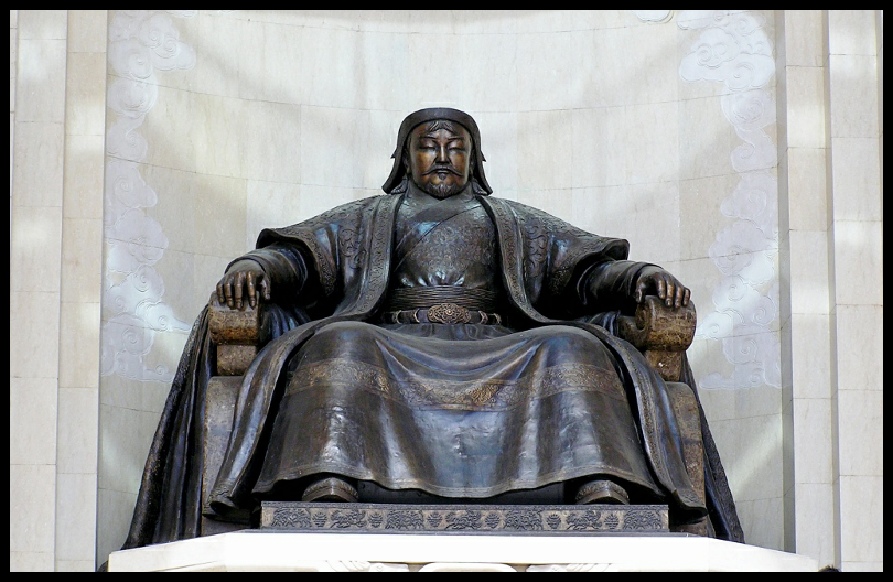 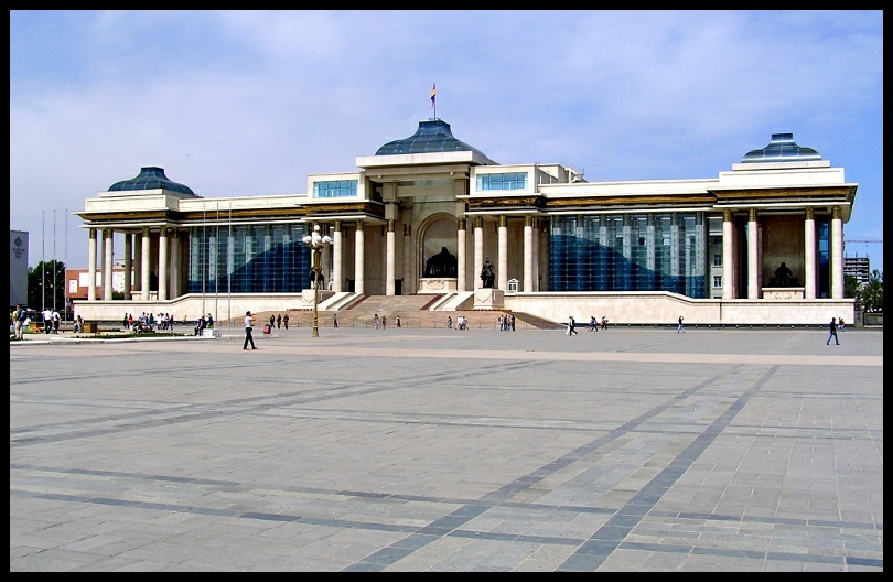 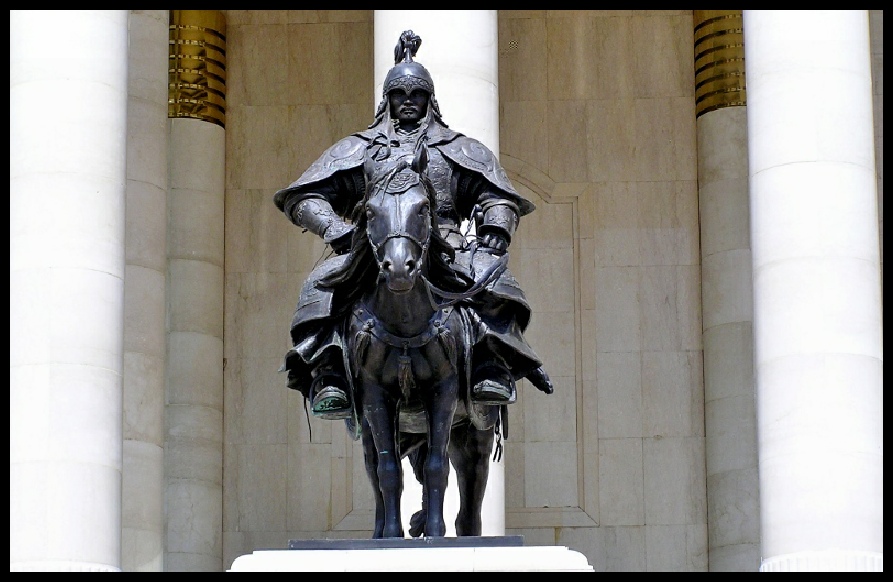 BELOW : This is one of the two bronze statues which flank each side of the statue of Chinggis Khan statue, in the colonnade above. 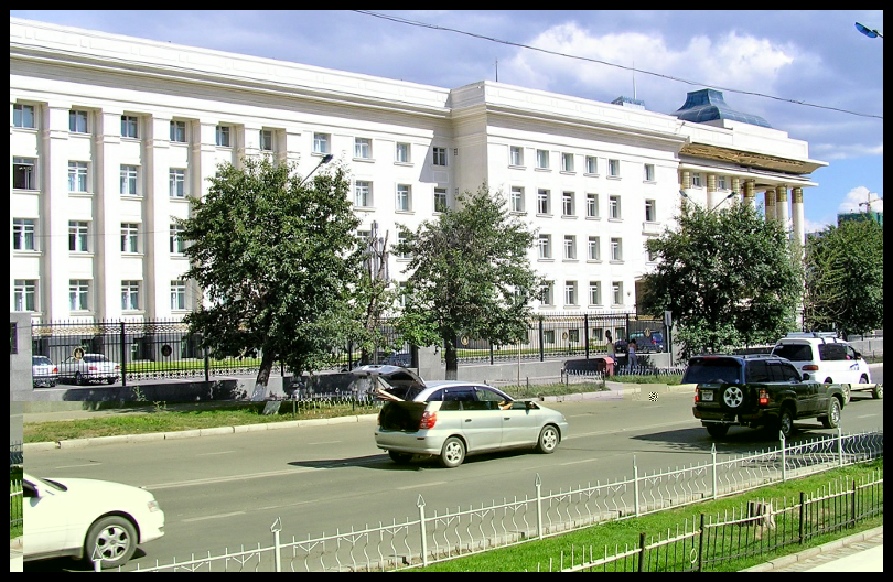 BELOW : This photo was taken on the western side of the parliament building. You can see in the right hand end of the photo, the extension (side view) of the colonnade, added on to the original building. 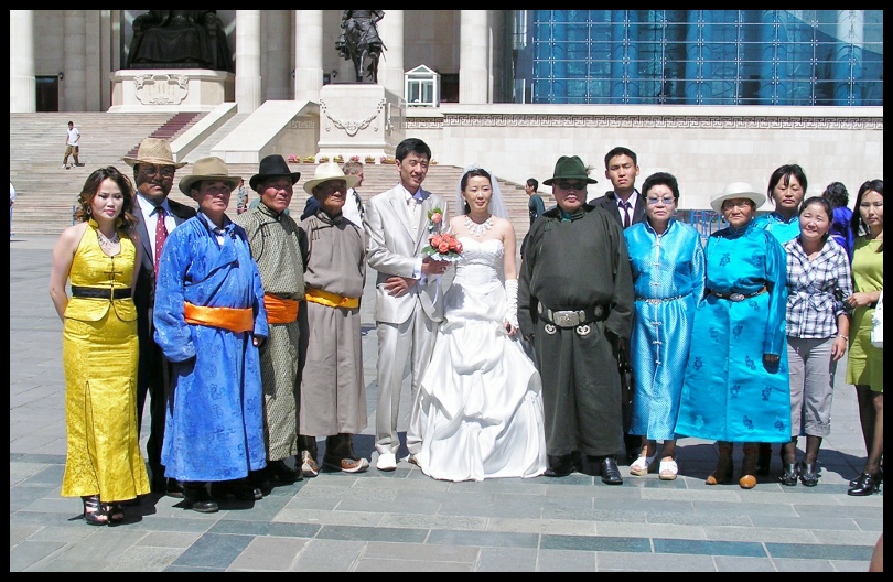 BELOW : The local people often come to this main town square to have their wedding photos taken in front of the Chinggis Khan memorial. This was one of two parties we saw, at about 11.00 am on a Monday morning. You will notice there is a range of clothing, both Western style and traditional Mongolian. The older men and women are wearing what is called a ‘Deel’, most commonly made of silk or cotton. 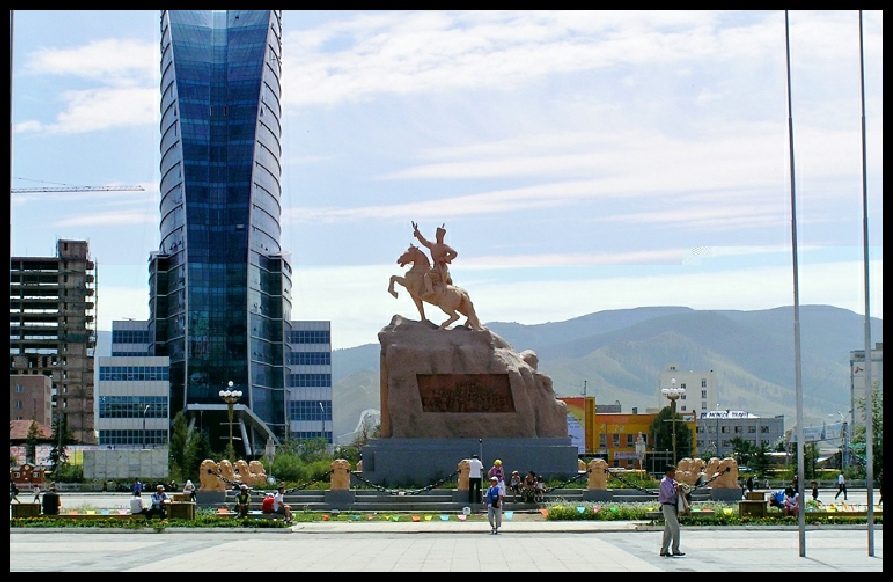 BELOW : Looking back at the Sukhbaatar statue from in front of the colonnade steps. You will notice there are many brand new buildings and very modern architecture in Ulaanbaatar, mixed in with very old buildings. It is a city with new construction happening everywhere you look. The glass building in this photo being one example of recent construction. 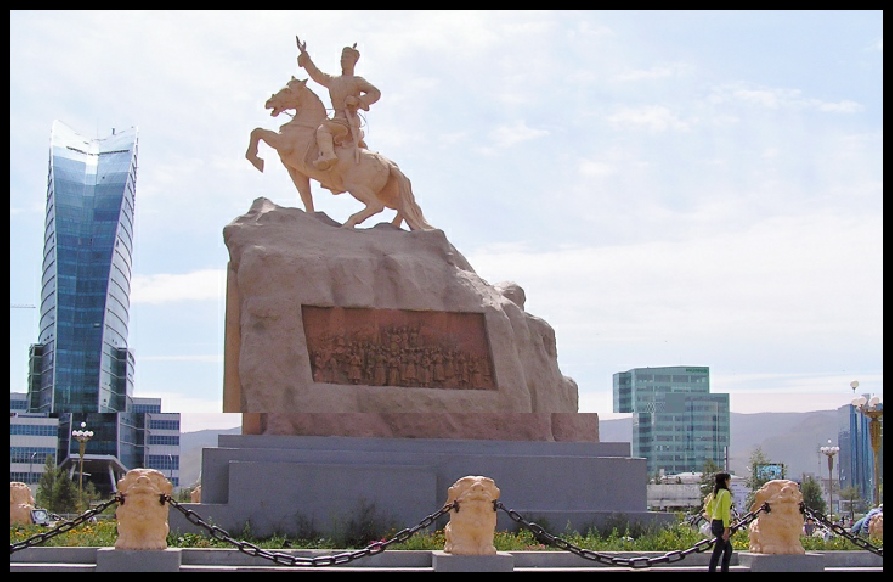 BELOW : Looking more closely at the Sukhbaatar statue. 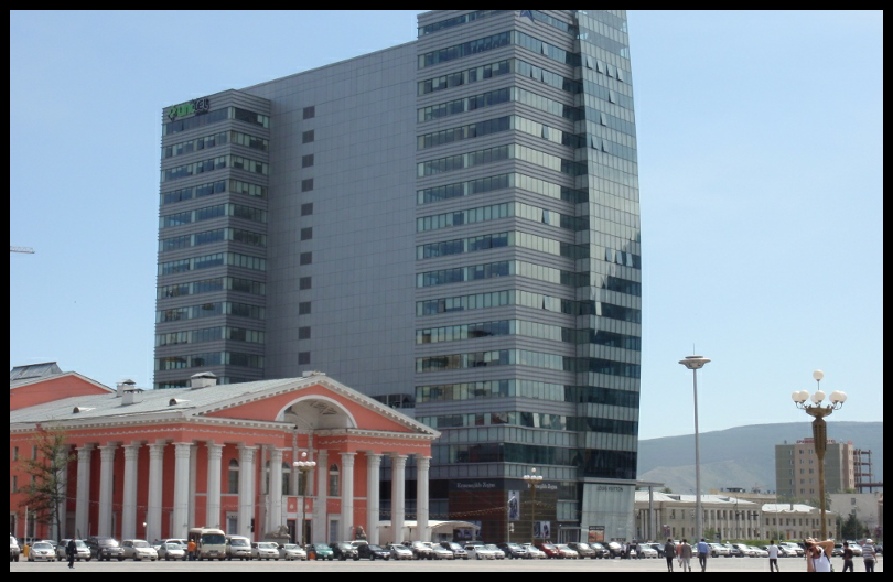 BELOW : The National Academic Theatre of Opera and Ballet of Mongolia (colloquially called Ulaanbaatar Opera House) opened on 15 May 1963, is located at the eastern end Chinggis Khan Square. It now lives in the shadow of another new high rise building. 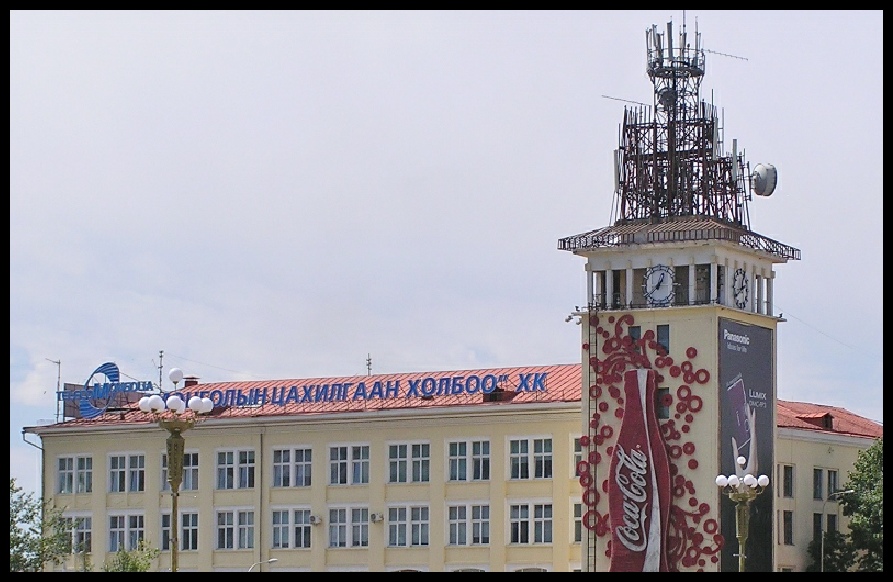 BELOW : This is the main Post Office building in Ulaanbaatar, it is on the western edge of the square. You will notice that as in many Western countries, communications towers and advertising are providing income opportunities for the government. 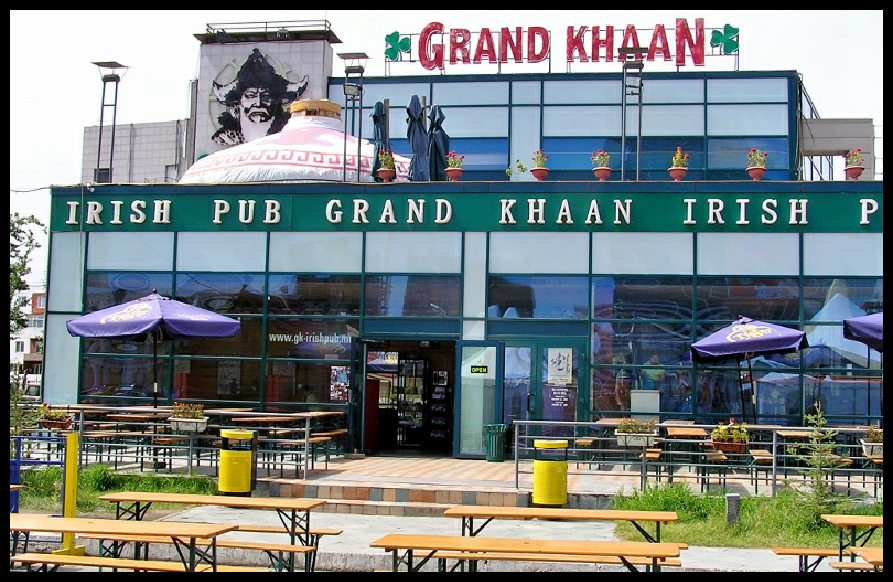 BELOW : Just across the street from the Post Office is what you would expect to find in any city. 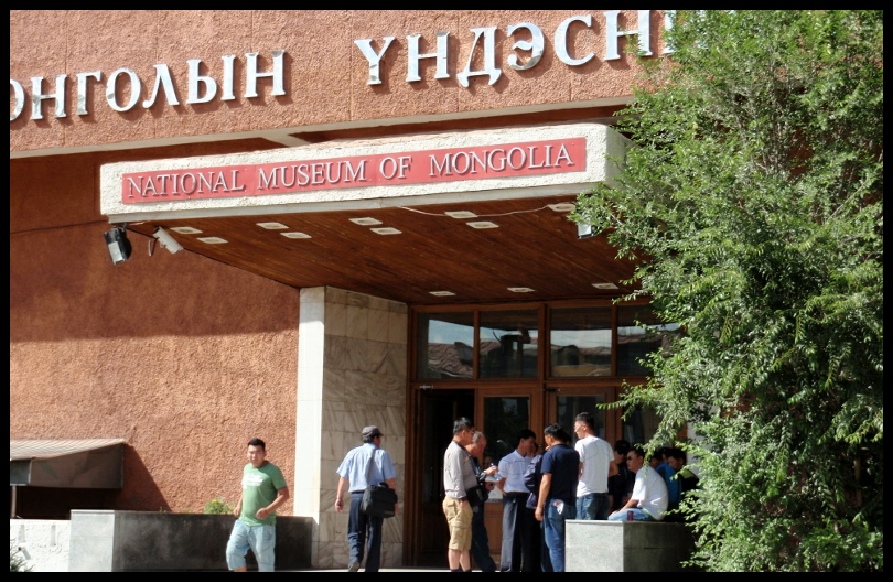 BELOW : The National Museum of Mongolia holds many ancient pieces of the art, craft and culture of Mongolian history. The remaining photos on this page were all taken inside this museum. 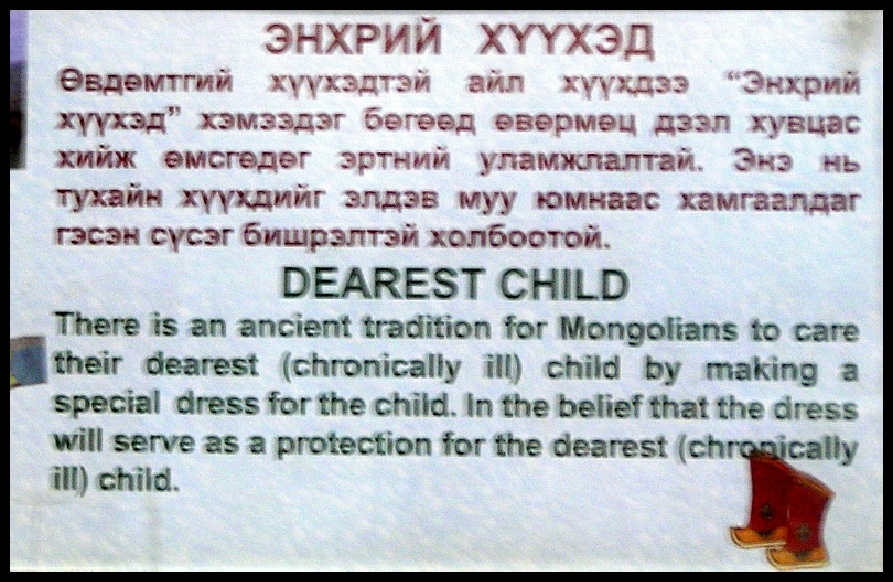 BELOW : The Dearest Child. 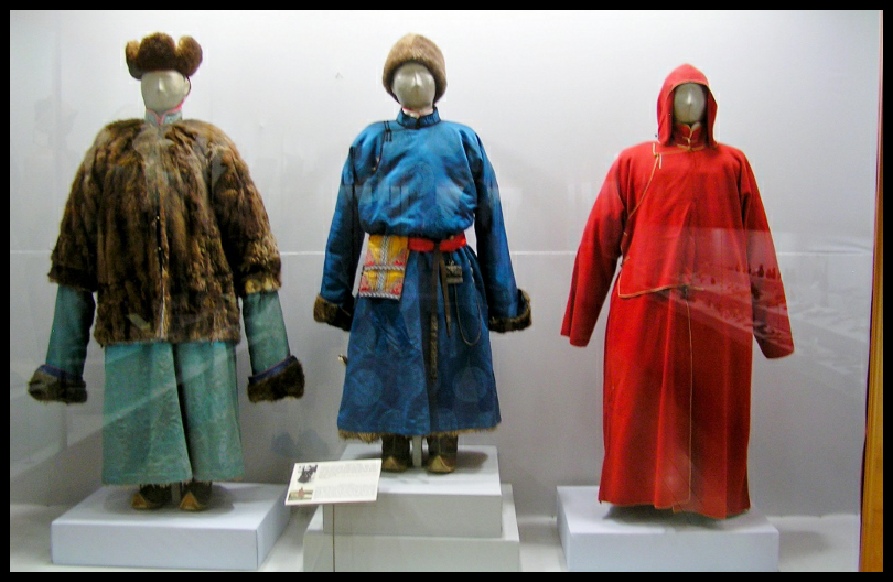 BELOW : Not what you would most likely find on the catwalks of Europe this year ! 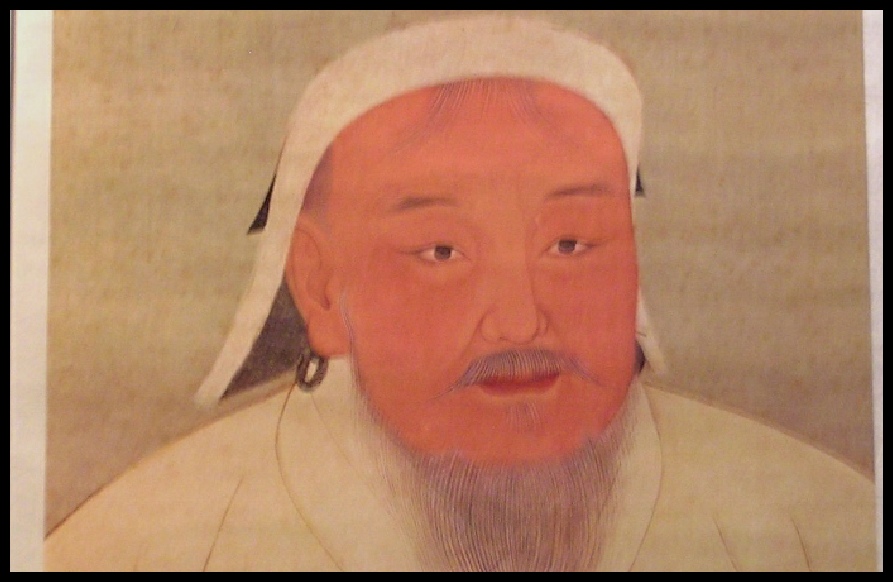 BELOW : An image of Genghis Khan. 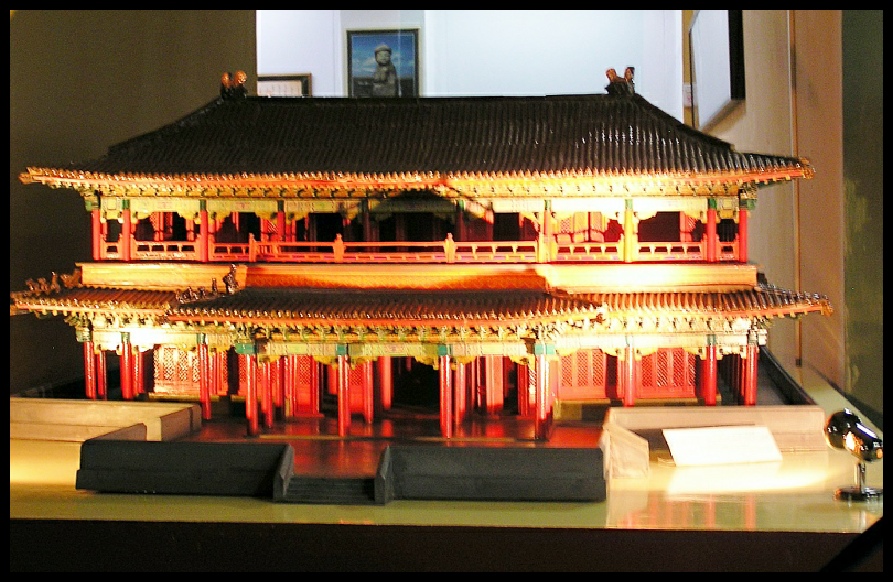 BELOW : A scale model of a Buddhist Temple. 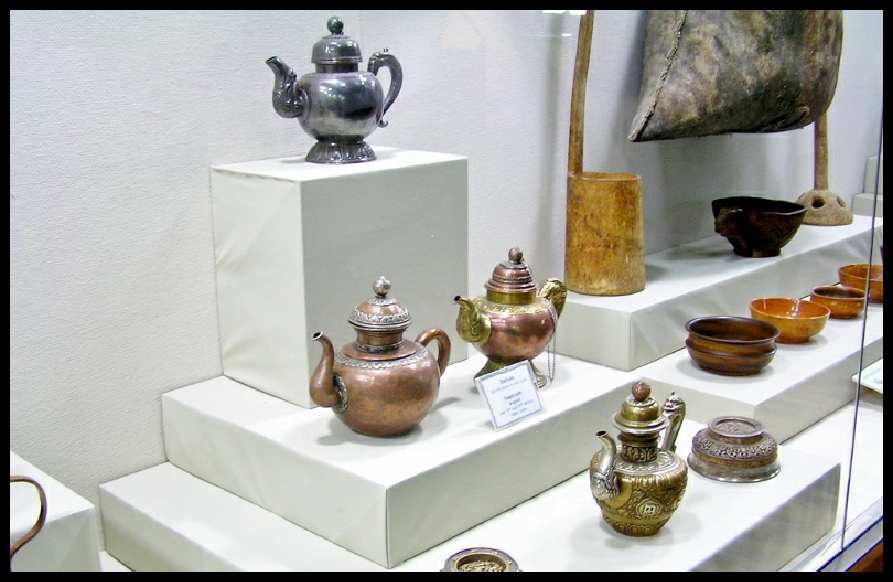 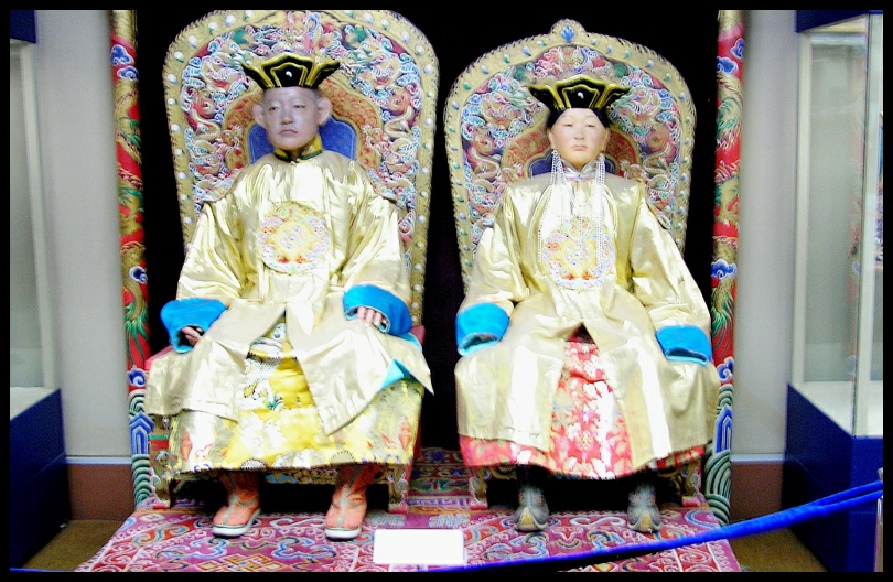 BELOW :Anyone for a cuppa ?

BELOW : Representations of the King and Queen from a time gone by.

BELOW : This crockery set was presented by the Soviet Union, on the first anniversary (1991),of the proclamation of the Mongolian People’s Republic. (i.e. When communism was replaced by democracy.) 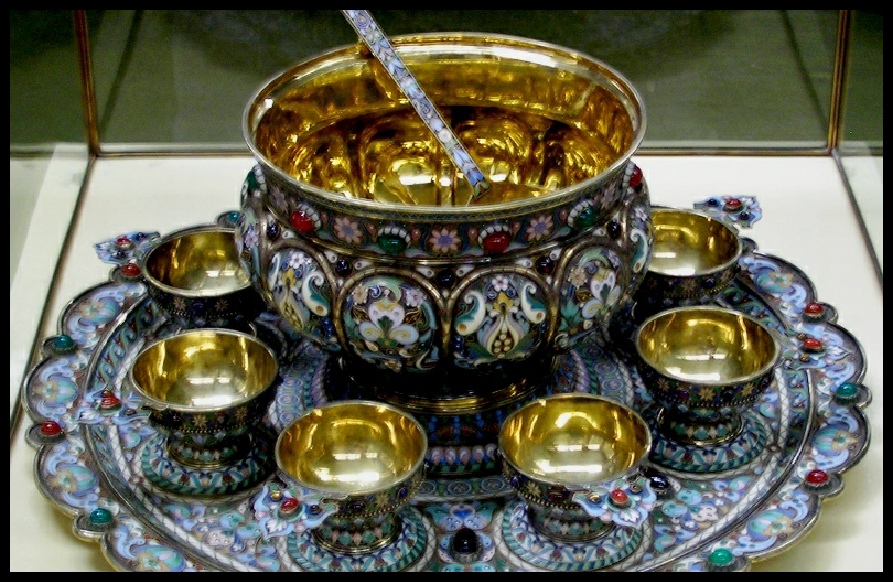 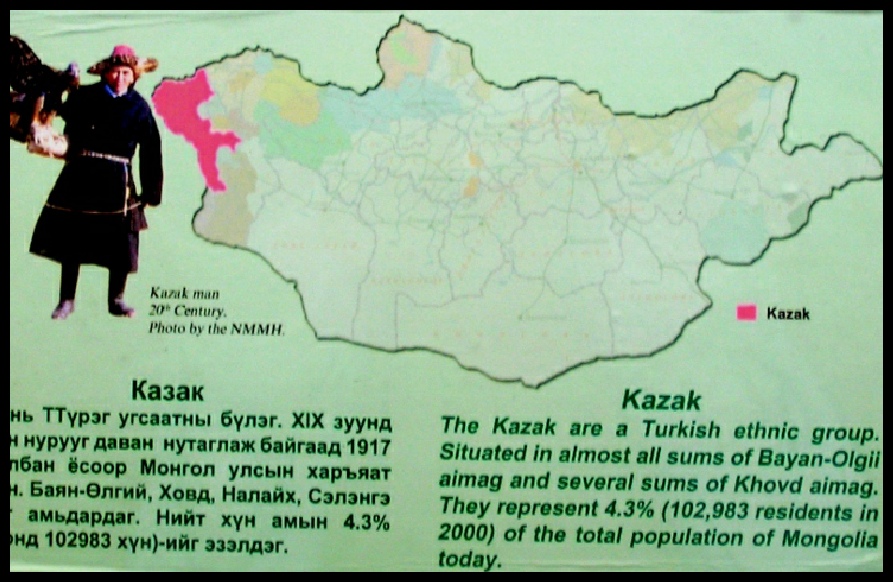 BELOW : The Kazak population of Mongolia.

BELOW : Some statistics about Mongolia. This information was applicable in 2010, however, more recent figures say that 45% of the population (total population of Mongolia is around 3 million people) now live in  Ulaanbaatar. 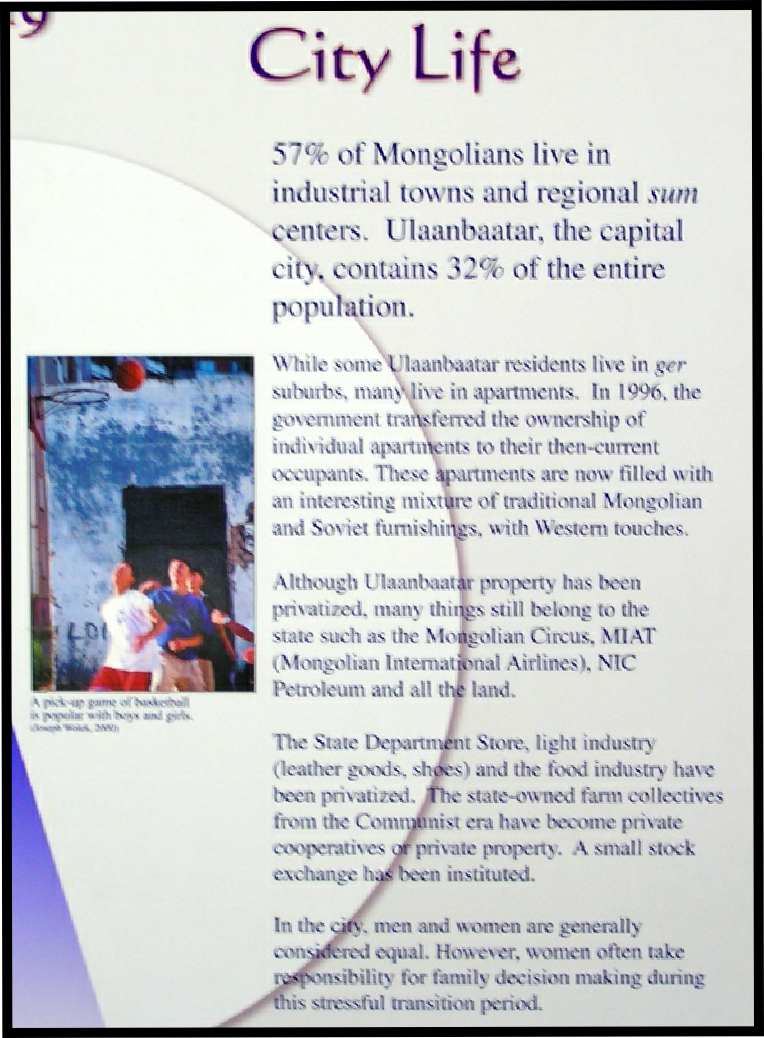 BELOW : The traditional clothing worn by nomadic Mongolians has many variations, depending on the season, the location and the occasion at which it is being worn. 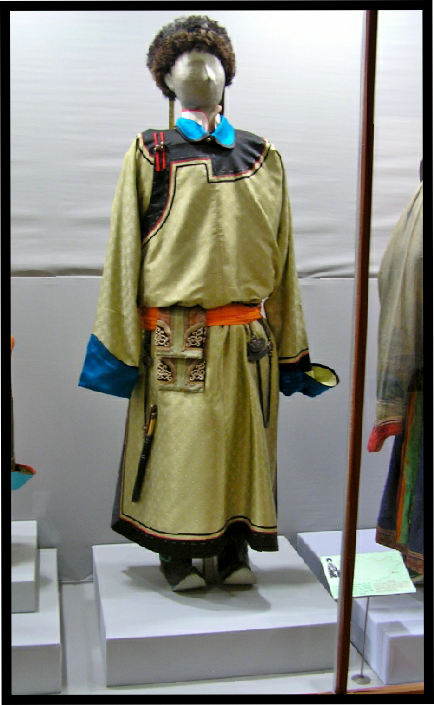 BELOW : A sample of the special clothing for The Dearest Child. 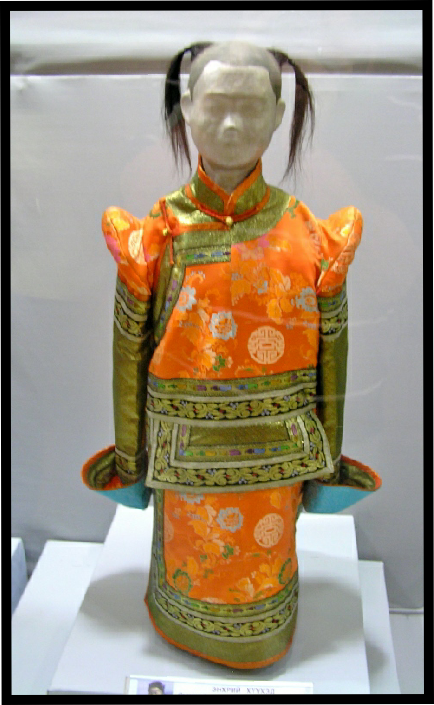 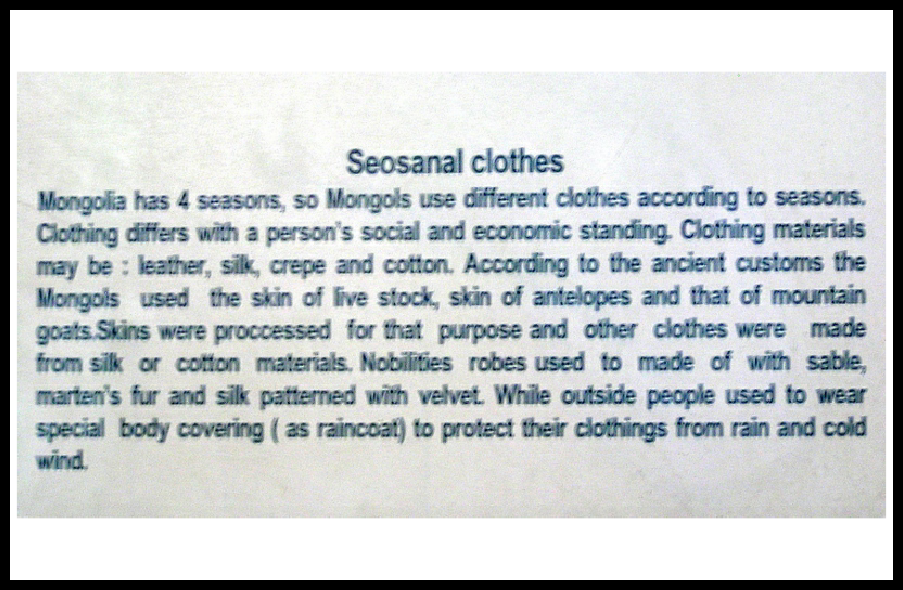