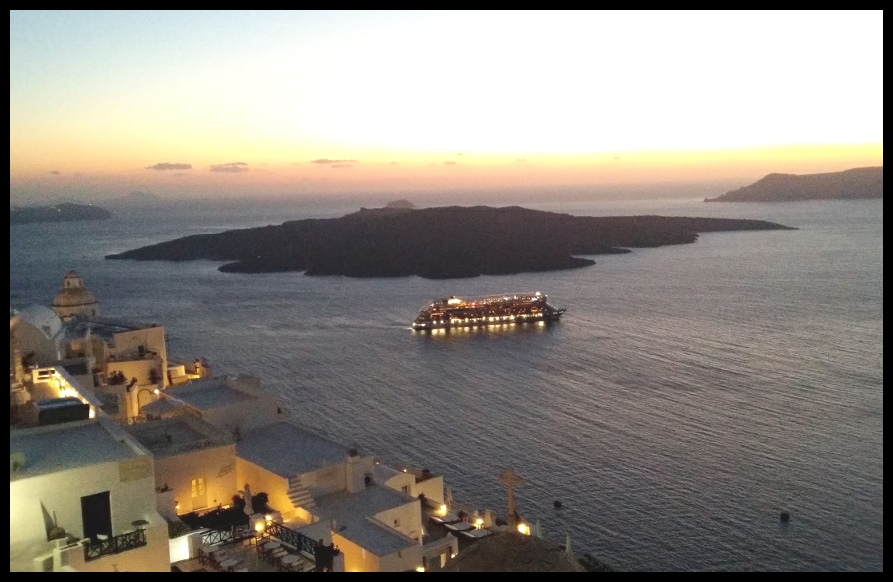 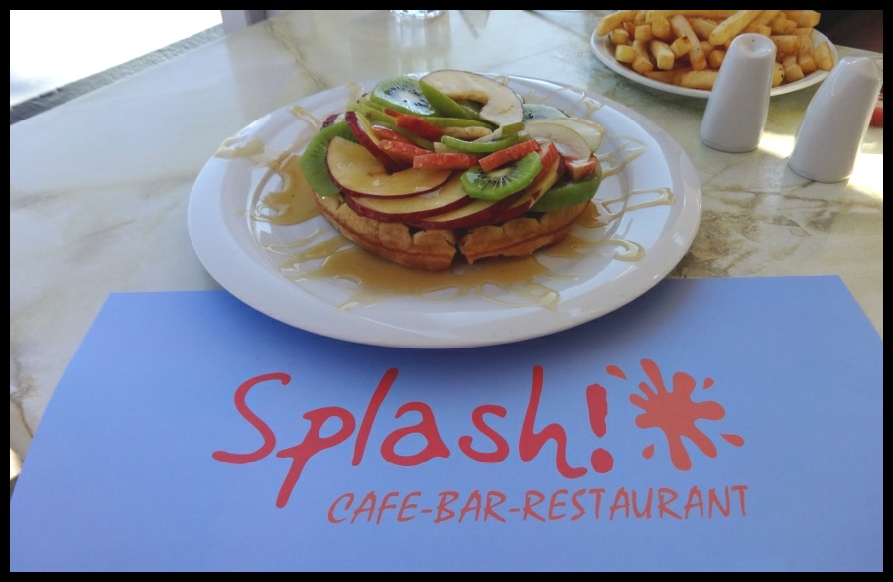 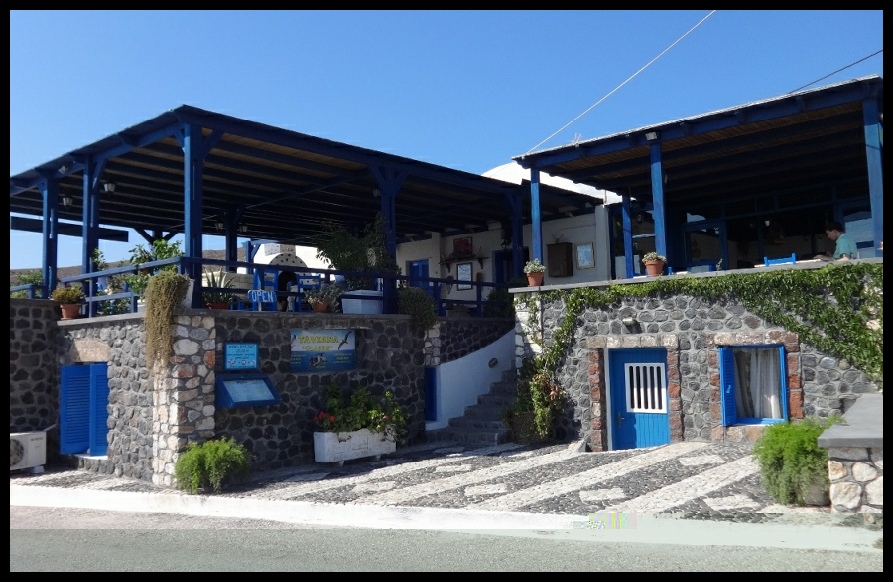 BELOW : I had a fresh fruit waffle for lunch today, before I set out on another bus ride to the village of Akrotiri, on the south west coast of Santorini.This town is near the Red Beach, and the archaeological site of the ancient city, which was last buried under the eruption of the volcano in the late 16th century BC. 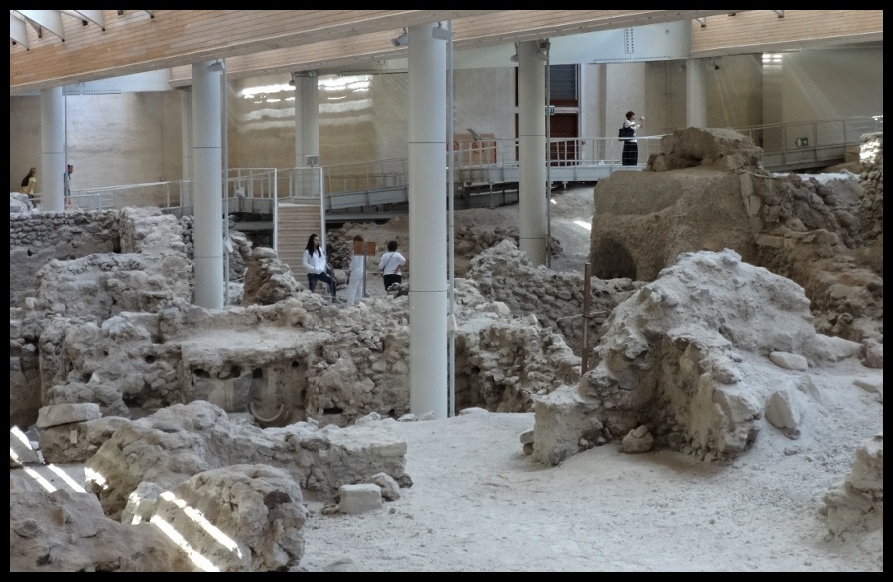 BELOW : Part of the prehistoric town of Akrotiri has been excavated and is protected under the new ‘bioclimatic shelter’ Visitors can explore the ruins from a raised walkway around the perimeter, and you can descend the stairs at various points to get ‘up close and personal’ in some of the areas. 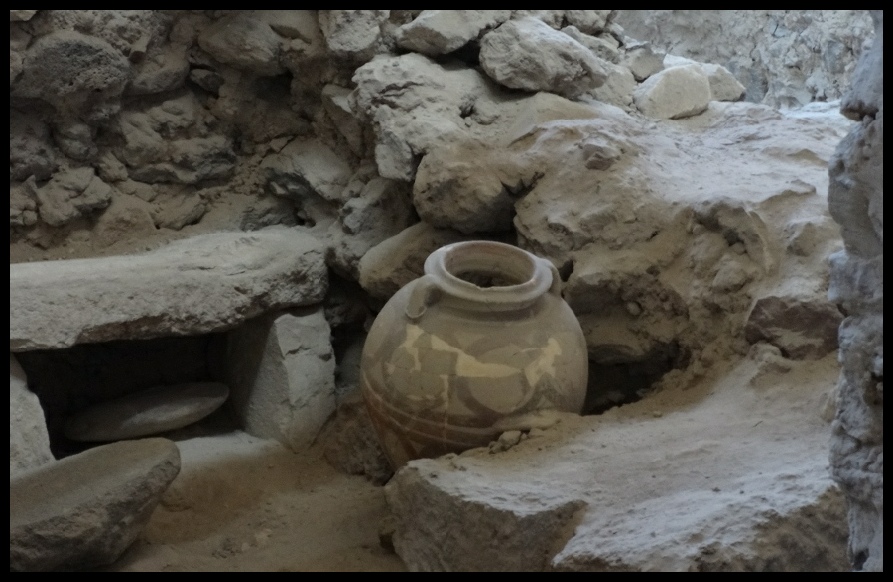 BELOW : This container has been left in-situ, inside one of the excavated buildings of ancient Akrotiri.  There is an area of approximately 1.2 hectares which is under cover, with plenty of natural sunlight to assist illuminate the excavated areas. 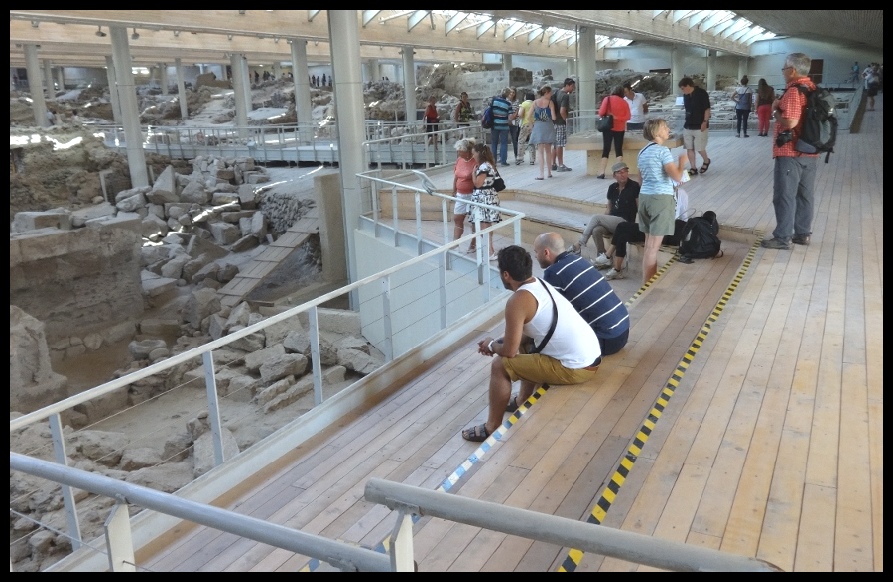 BELOW : The walkways also have some tiered steps/seating areas to allow visitors who are on escorted tours, to view specific areas of the excavations while the guide explains particular points of interest.

BELOW : The existing town of Akrotiri, like many other seaside towns on Santorini, has a selection of tavernas ready to offer drinks and sustenance.

BELOW : This covered walkway led to a taverna located with a view looking out over the Aegean Sea. 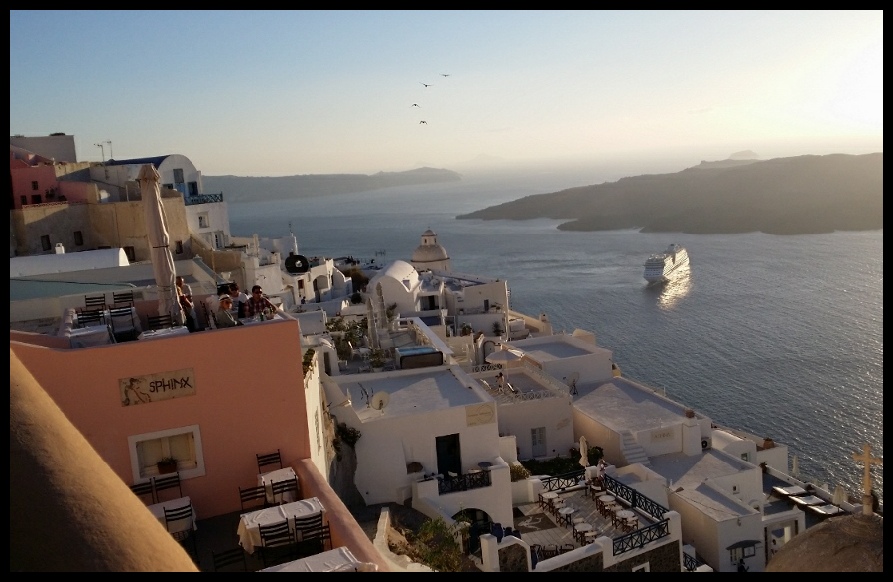 BELOW : For our last sunset in Fira we decided to choose a vantage point in one of the many restaurants located close to the top, along the cliff face, generally facing west. This was a very comfortable location to view the sunset, and eat, concurrently. 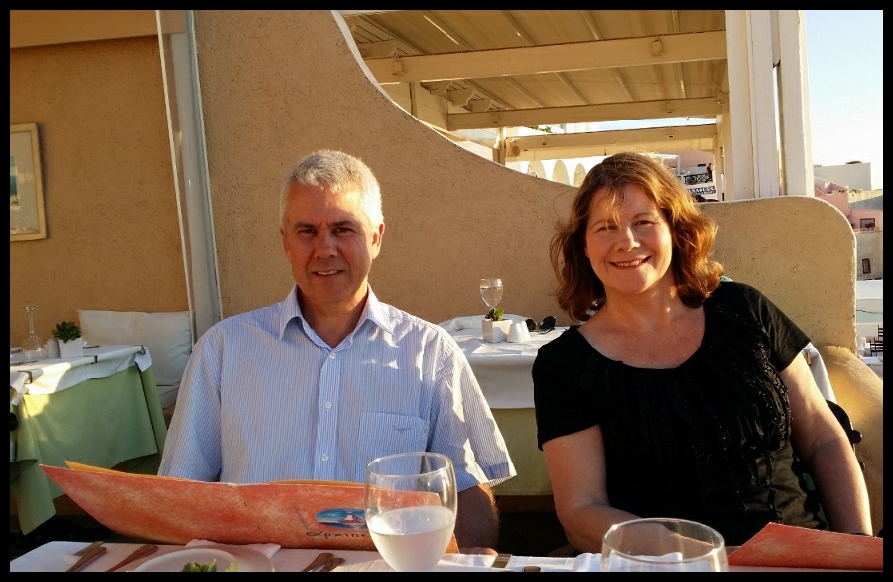 BELOW : That, of course, required us to again closely study the ‘form guide’. After due consideration decisions were made and meals were ordered. 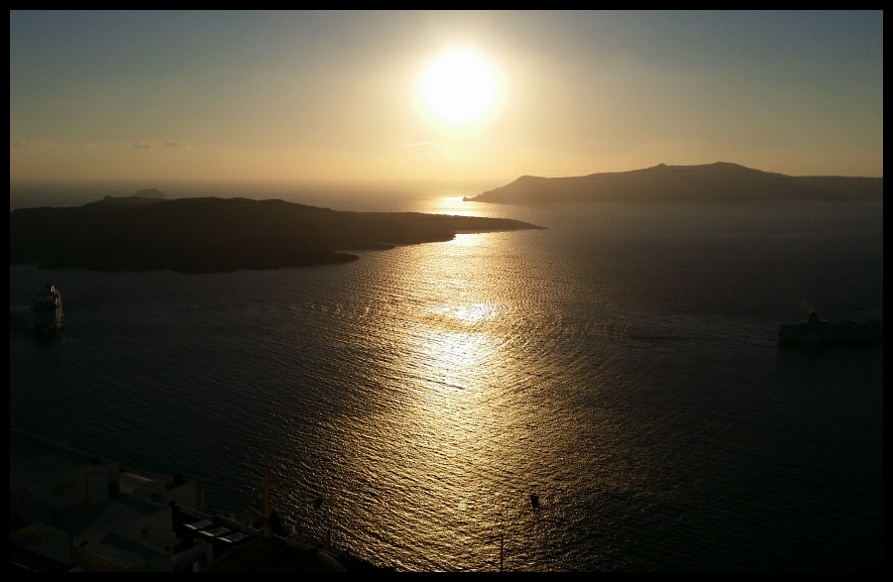 BELOW : I think the down side of ‘dining’ and ‘sunset watching’ as a concurrent activity, is that you can run the risk of missing a stage of the sunset while you concentrate on consuming the culinary delights. It can be like missing a wicket at the cricket, after watching for some time and you’re momentarily distracted ! 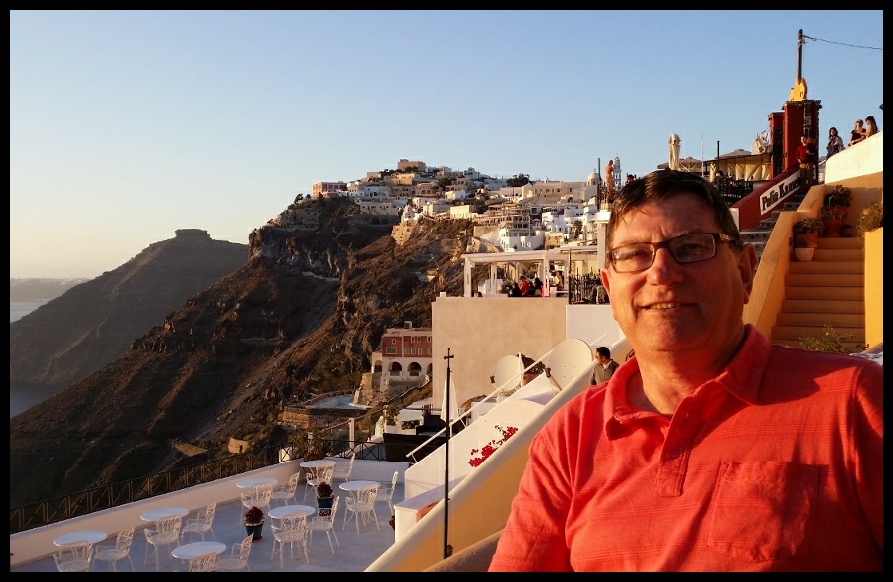 BELOW : I did my best though to ‘multi-task’ and I am relatively happy with the results achieved. 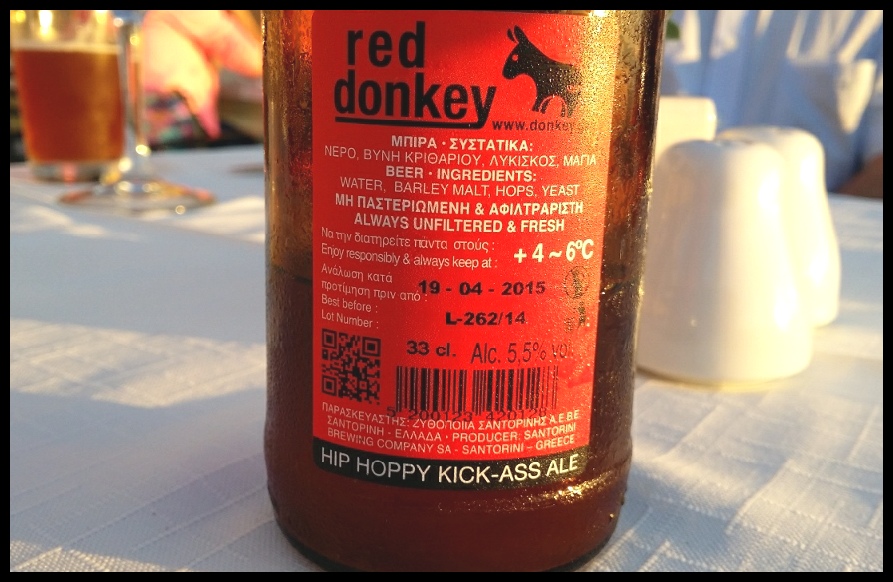 BELOW : For those who are possibly concerned, I can confirm that no donkeys were harmed in the production of this Hip Hoppy Kick-Ass Ale !  (The welfare of anyone who consumed the product, however, is another matter.) 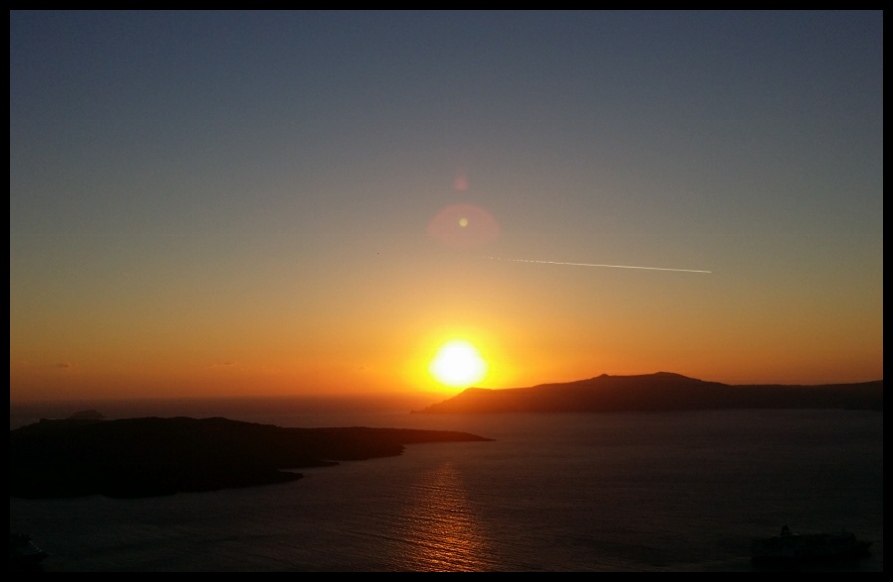 BELOW : The sunset was quite a good one tonight. 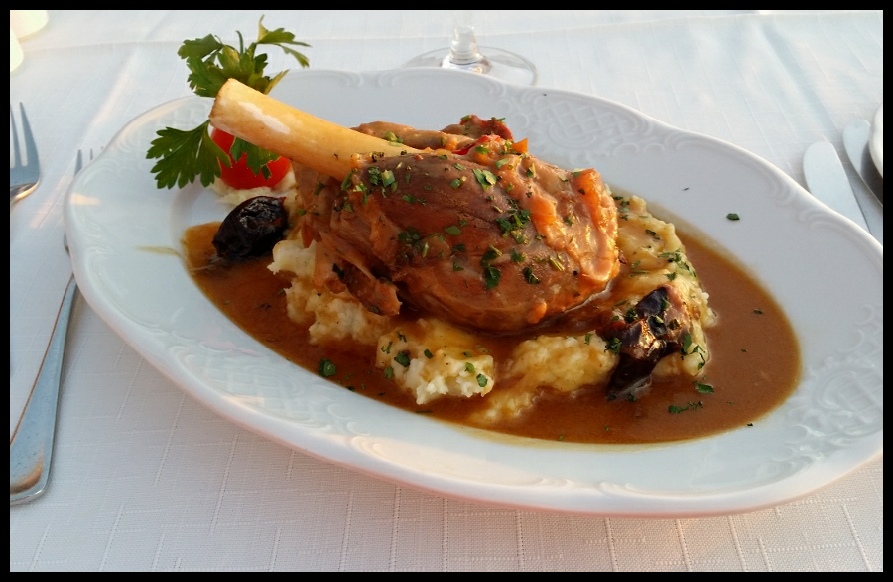 BELOW : But then, so too was the Lamb Shank. 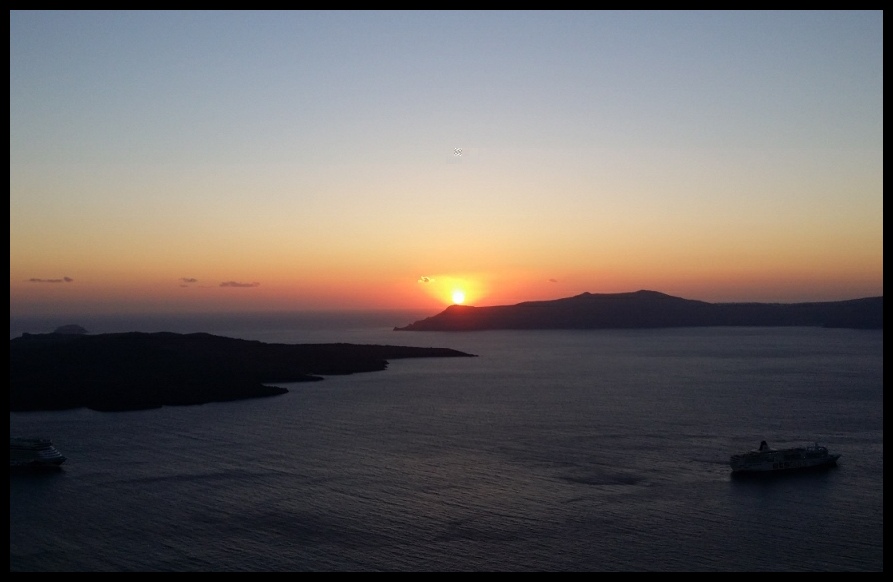 BELOW : That’s the volcanic island we went to visit (behind the cruise ship). 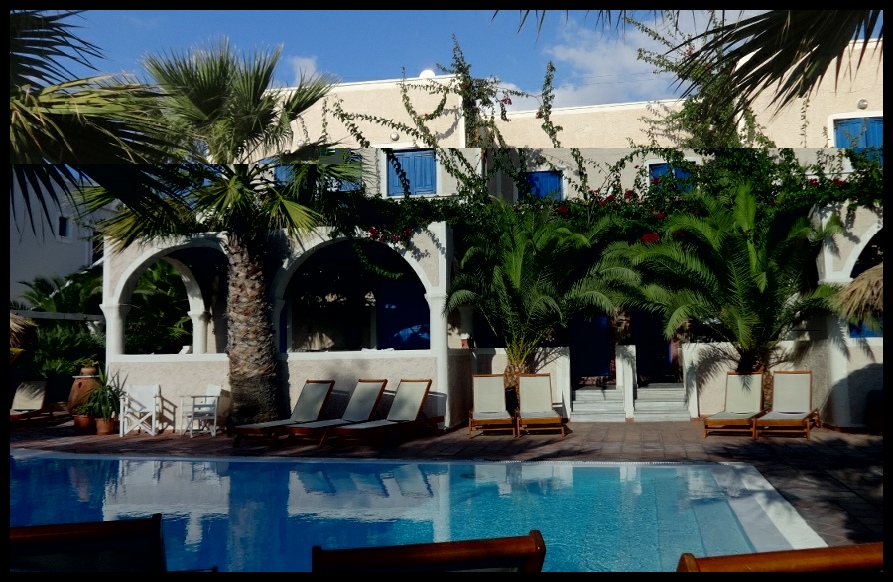 BELOW : This is the hotel we stayed in at Kamari (The Boathouse). A family owned and run business, which provided great value for money. It is located about 50 metres from the Agean Sea, on the east coast of Santorini. 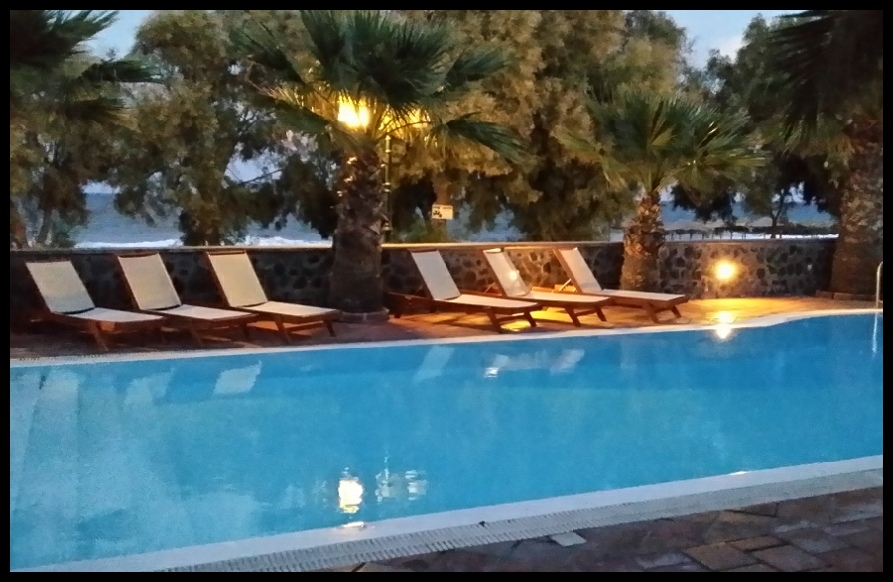 BELOW : In the early evening the pool has a very peaceful outlook. You can see the gently rolling surf in the background, just beyond the trees. 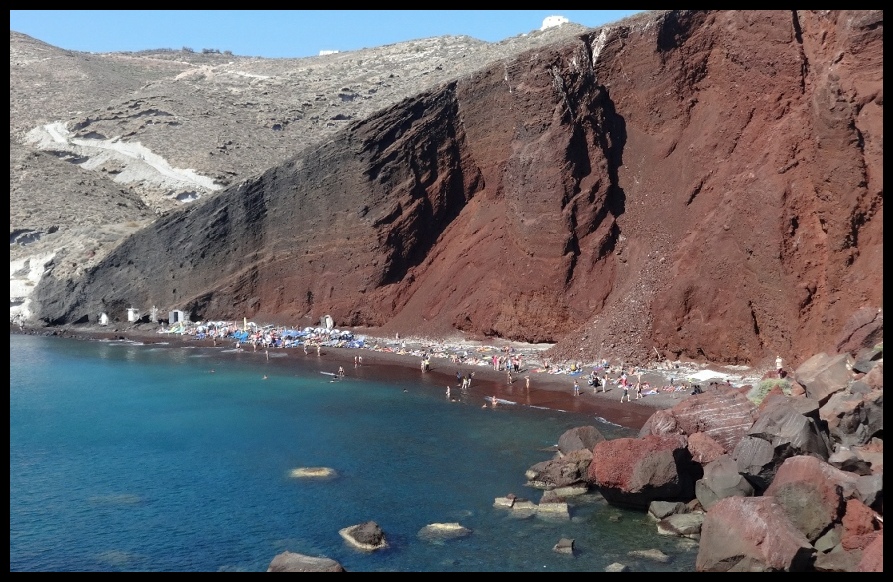 BELOW : My walk finally led me to the Red Beach of Akrotiri. (I see it more as brown, but I could see an argument for a reddie/brown.) Regardless of the colour, there were still plenty of visitors. 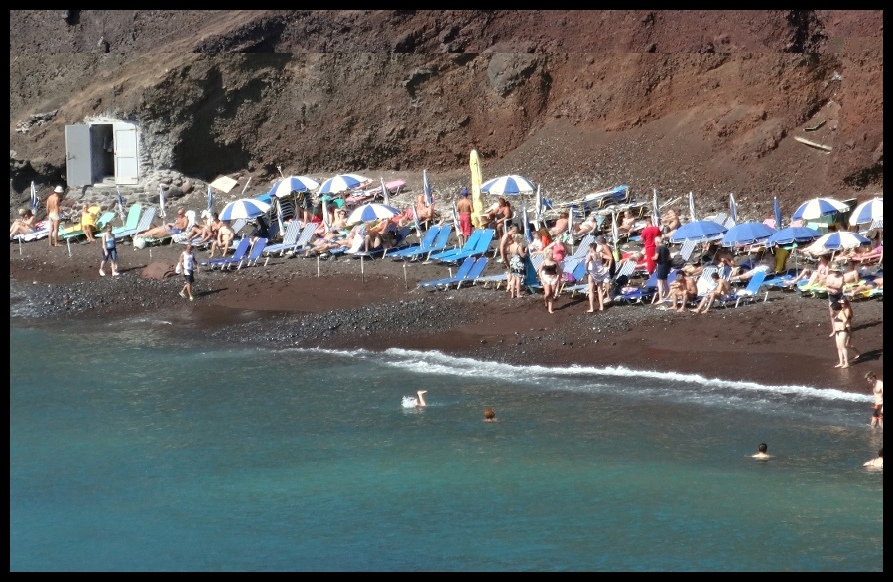 BELOW :  Once again the sun-beds and umbrellas are on offer. 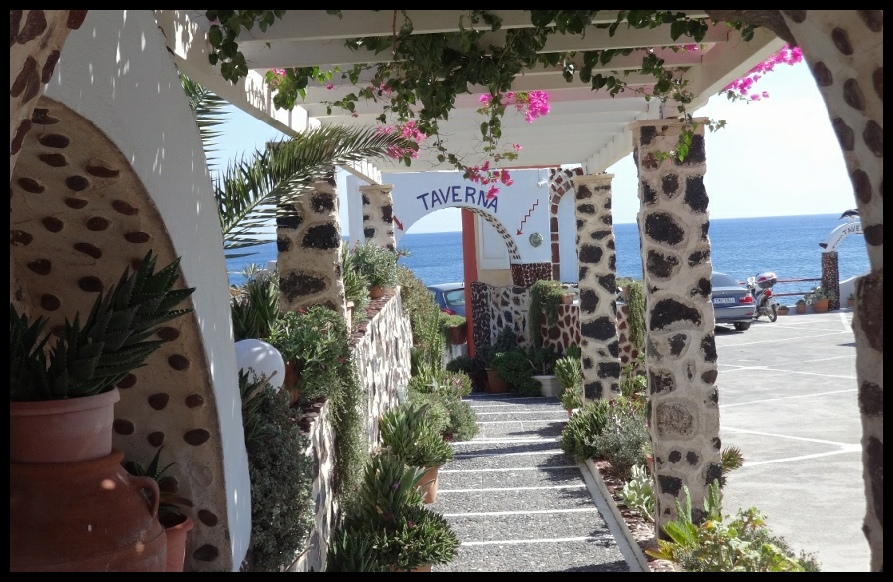 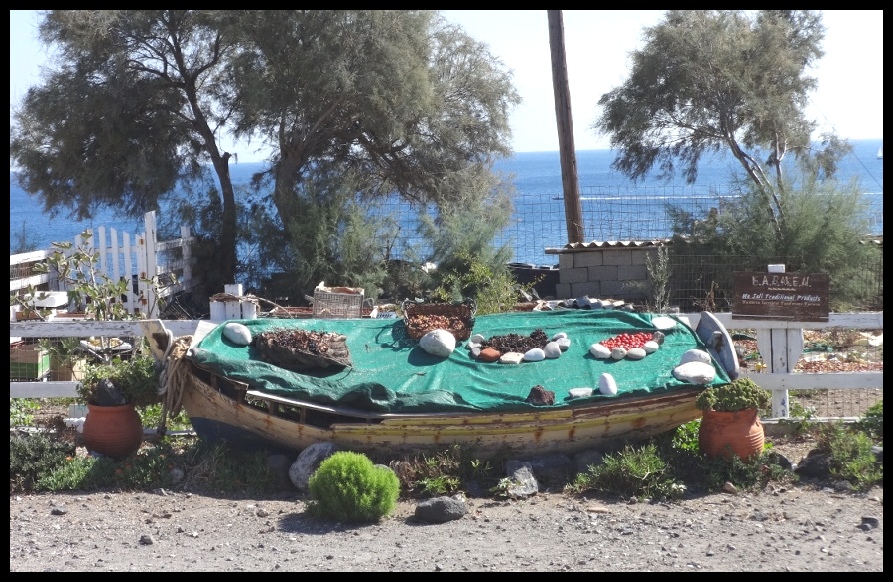 BELOW : A little further along I came across some local produce for sale which had been sun-dried.

BELOW : Mini tomatoes were one of the products, and also grapes were on offer. 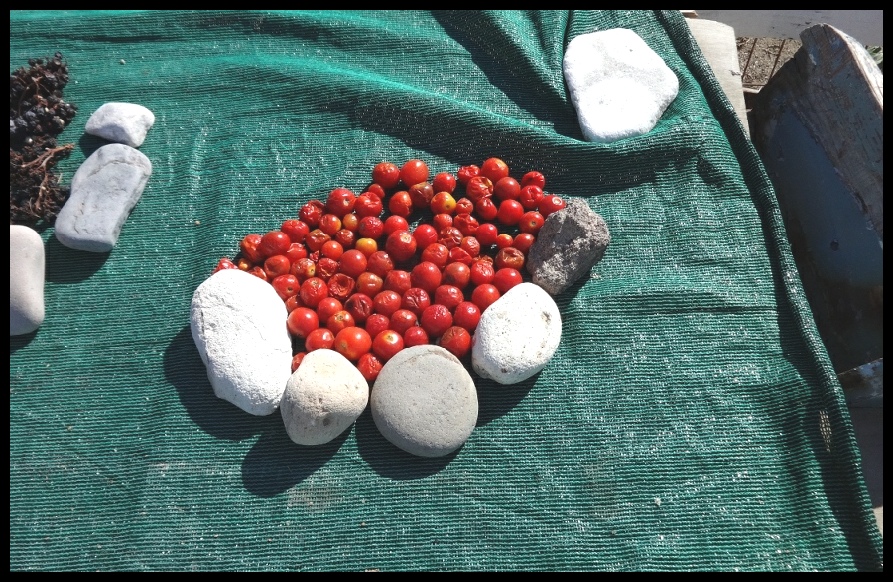 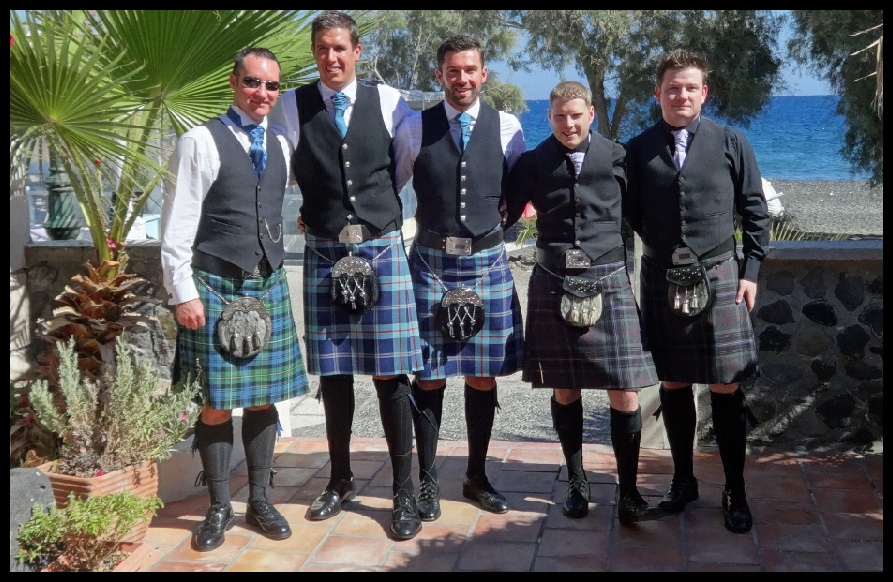 BELOW : We are back at our hotel (In Kamari, not Scotland). We discover a Scottish wedding party has booked into the hotel, and are leaving from here to go up to Fira for their wedding and reception. It’s our last day on Santorini, but my job as a photographer (read ‘stickybeak’) , is to gather records of our trip. 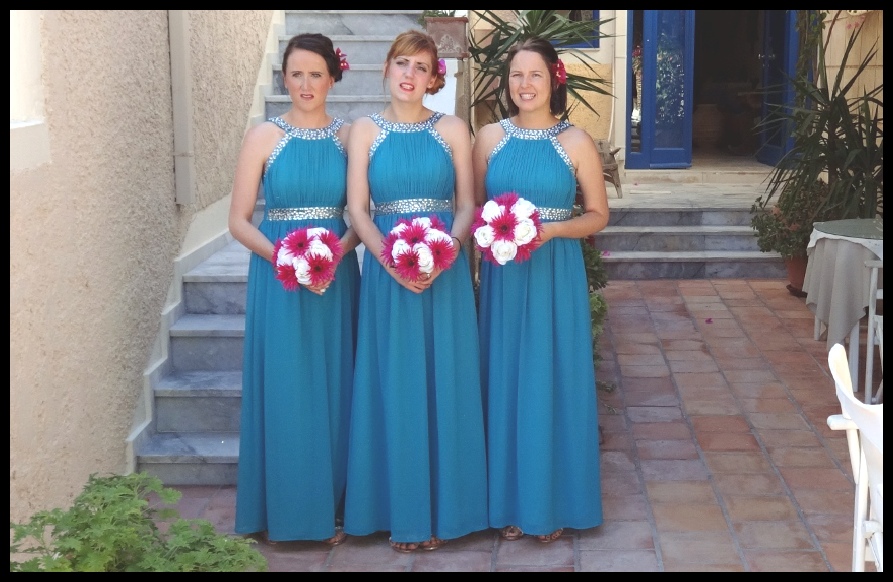 BELOW : The Bridesmaids were in Greek styled dresses, in a beautiful blue. They may appear a little bemused, I think that’s because they are all asking themselves, “Who is this guy taking a photo of us ?” 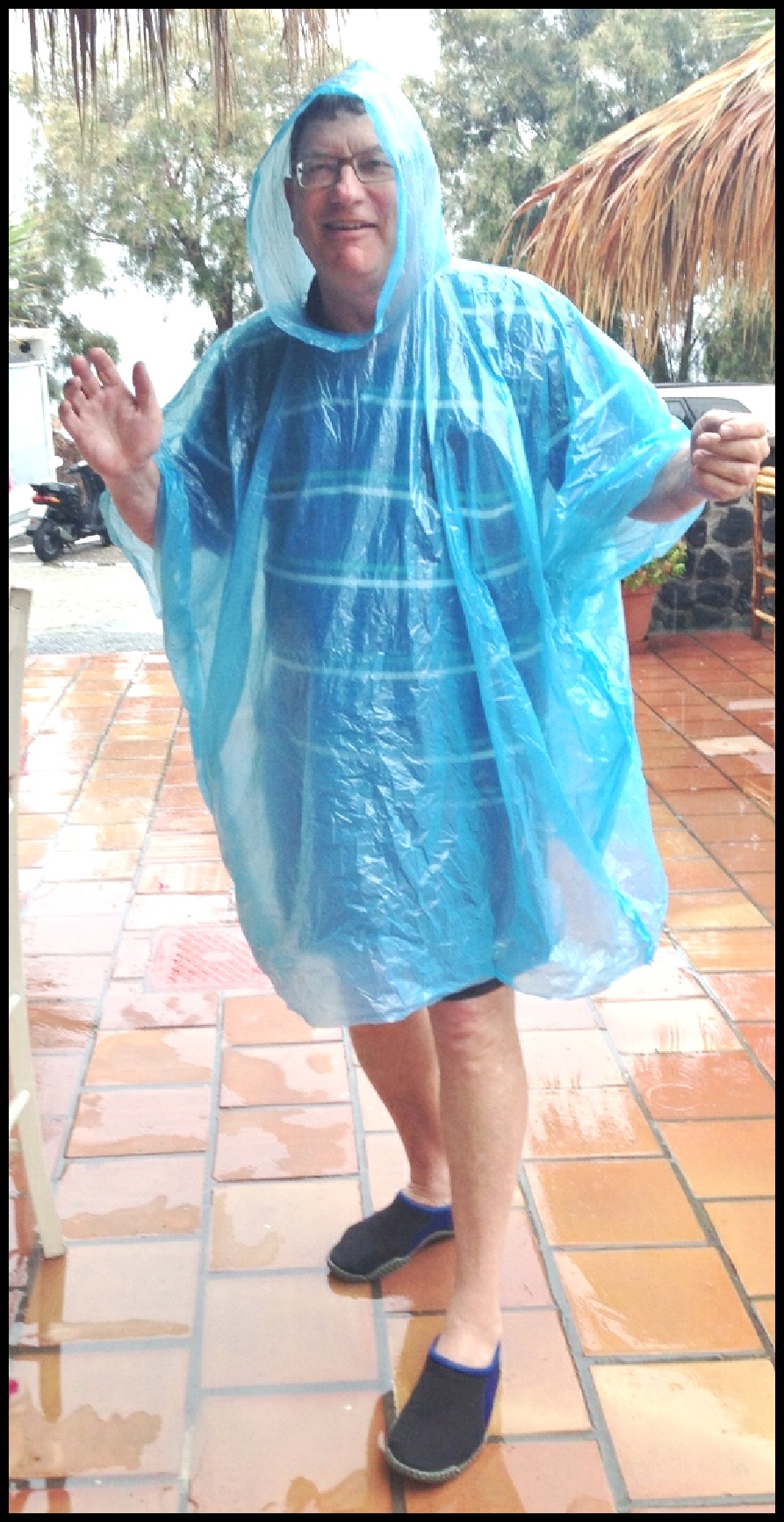 BELOW : And there I was thinking to myself  “They are probably a little bit jealous, of my quite fetching, little blue dress” . . . Or possibly not ! 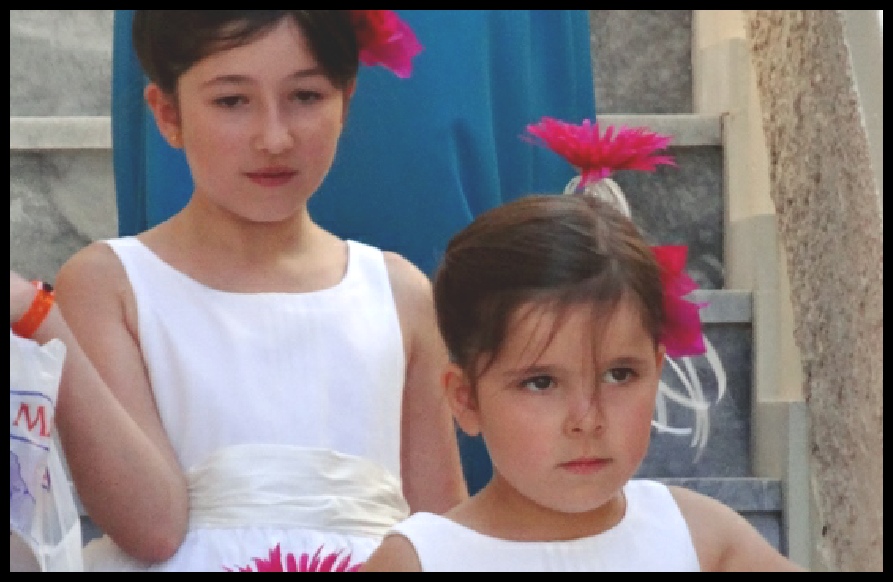 BELOW : The two flower girls were concentrating as they descended the stairs at the hotel, before they were driven away to the wedding service. 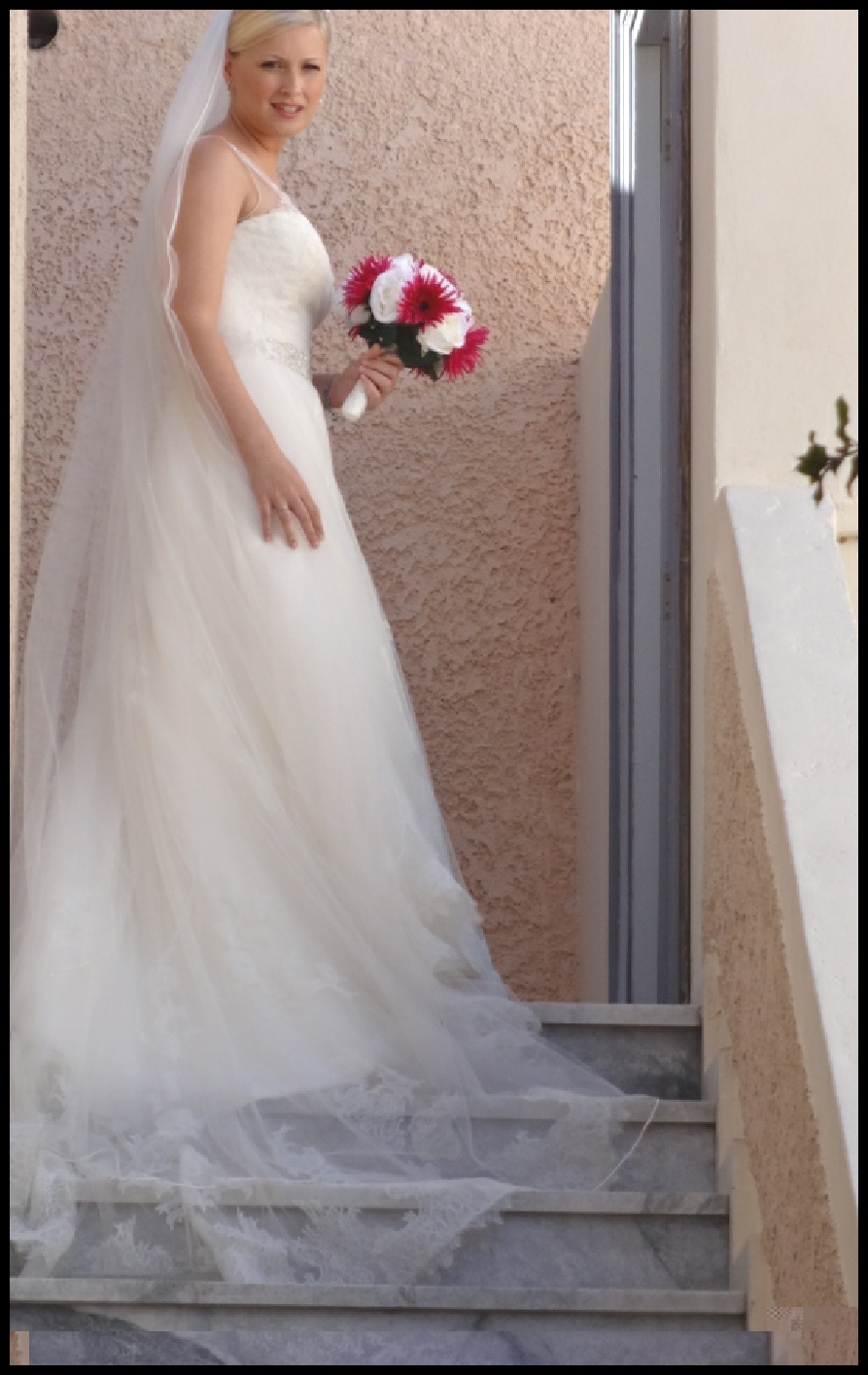 BELOW : Then the bride appeared at the top of the stairs.

It was only a 3 hour direct flight from London, to bring the bridal party to Santorini for the special day. 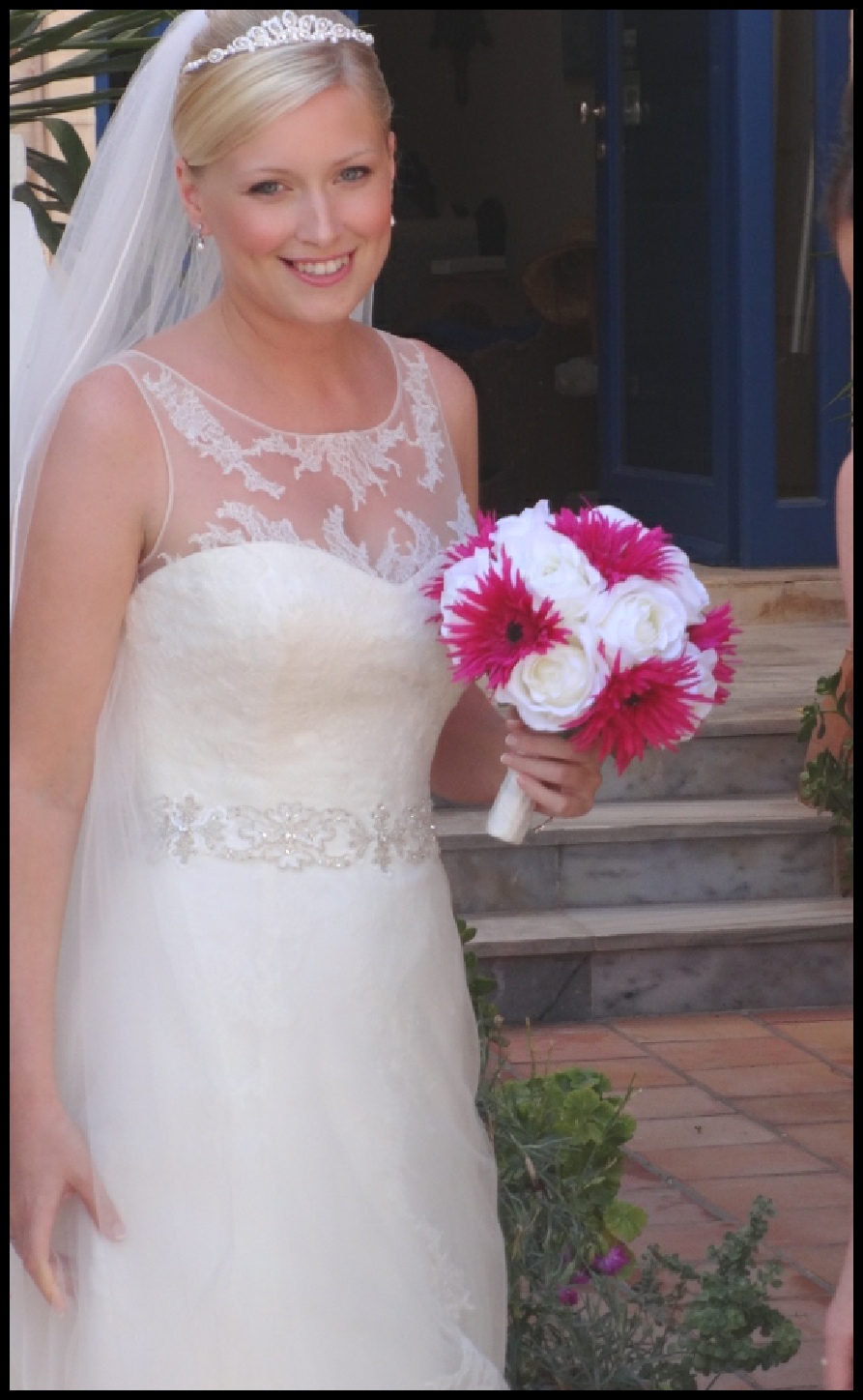 BELOW : At the bottom of the stairs she was looking quite ready to be whisked away to the service. 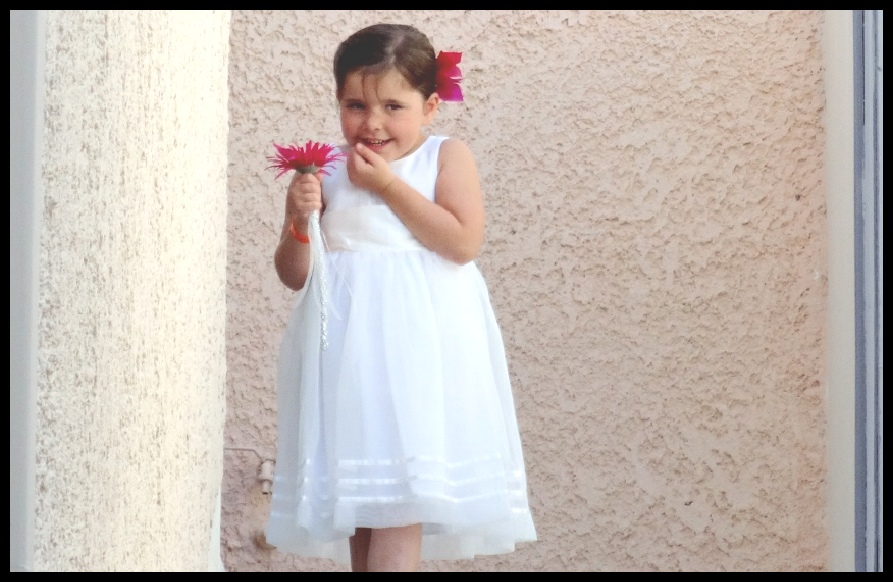 BELOW : One of the flower girls was a little bit shy when she first appeared at the top of the stairs. 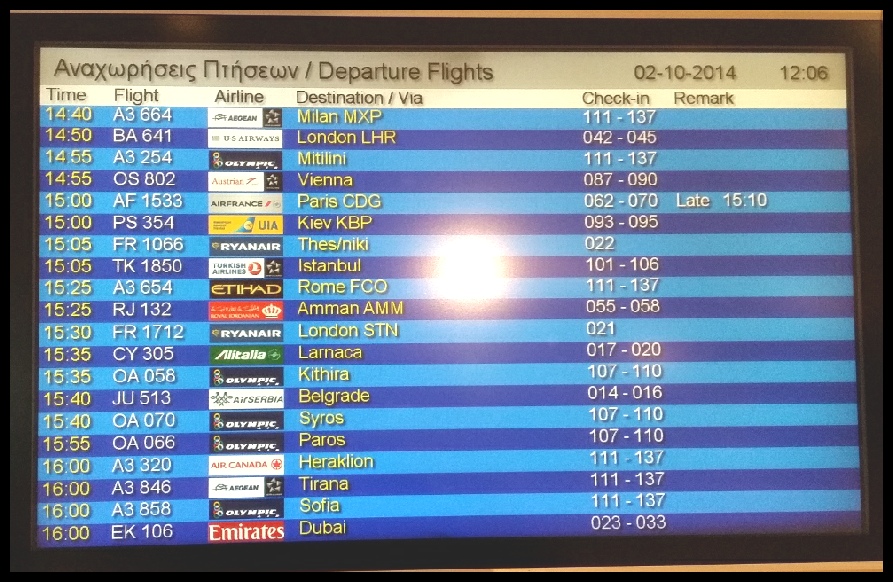 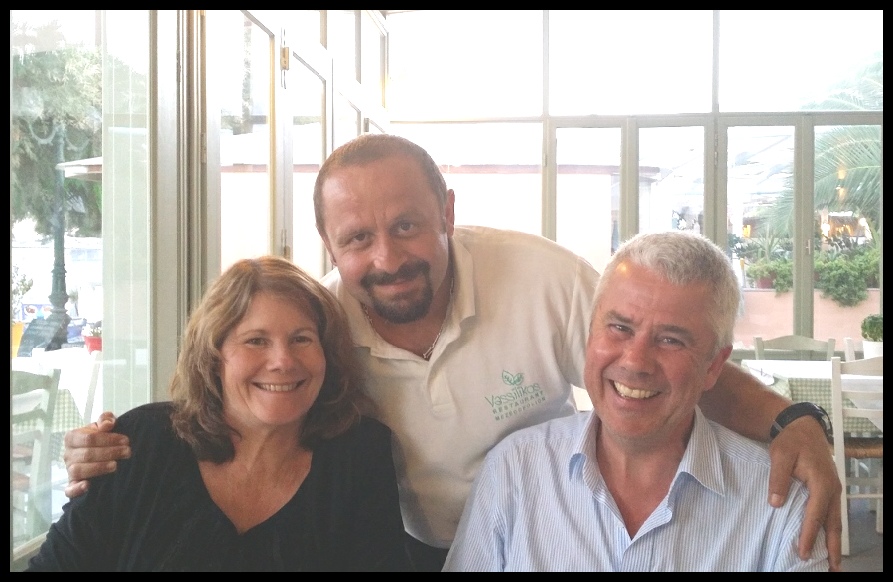 BELOW : After all of the excitement of the wedding during the afternoon, in the early evening we went to have our final meal on Santorini, with our favourite waiter attending to our every need. (Just two doors down from our hotel) At 7.00 pm we were driven to Santorini Airport for a 45 minute flight back to Athens.

BELOW : After an overnight stay at Athens Airport Hotel, we needed to book-in for our return flight from Athens to Sydney (Via Dubai). When we studied the departures board at the hotel, we were reminded that even though Milan, London, Vienna, Istanbul etc. looked appealing . . . Home was where we were headed.