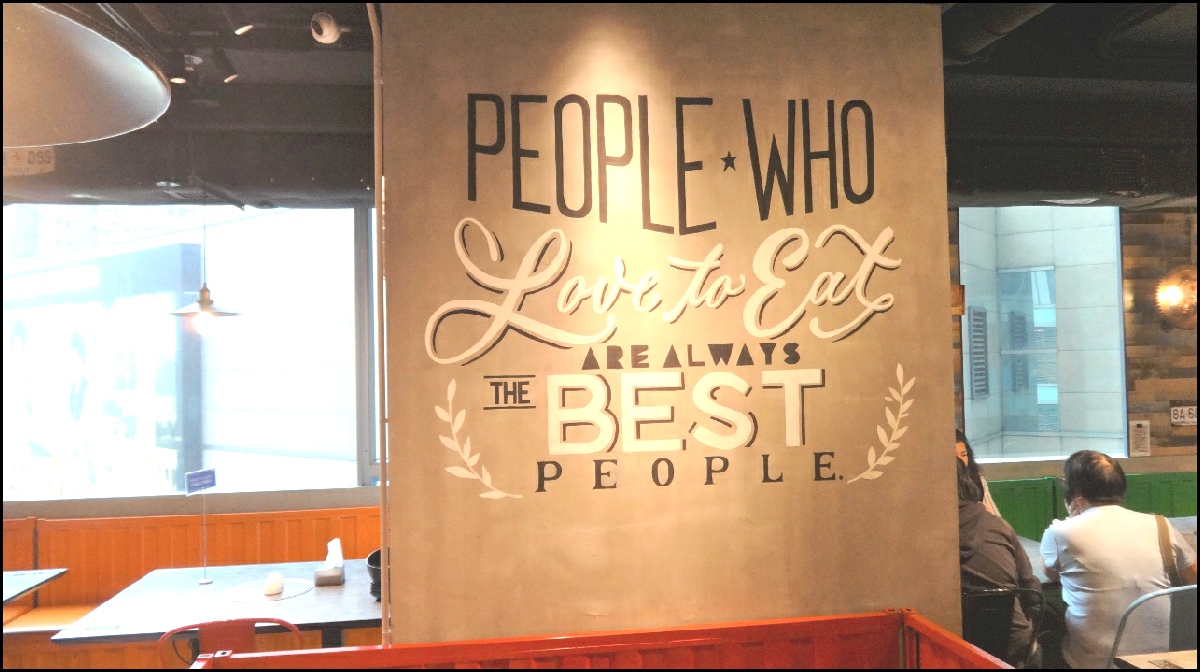 BELOW : The 3rd floor of my hotel was the venue for the buffet breakfast area of the hotel. The sign below was located in the seating area. The buffet was a mixture of both Chinese and Western style foods, and provided a wide variety of choice. 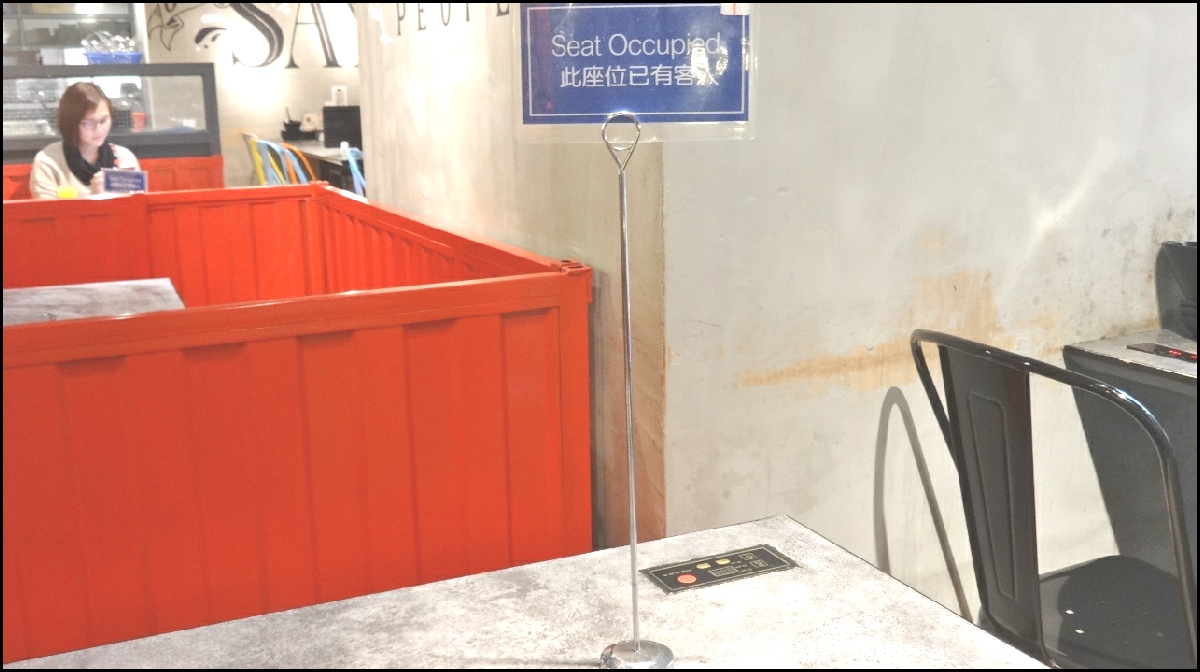 BELOW : The sign below ‘Seat Occupied’ was placed on the table top by the staff member who showed you to an available seat at a table when you entered. Because it is a buffet, the sign let’s staff know that the seat has already been allocated, in case the occupant is currently at the buffet. You return the sign as you are leaving. It is a good system, in what can be a very busy area. 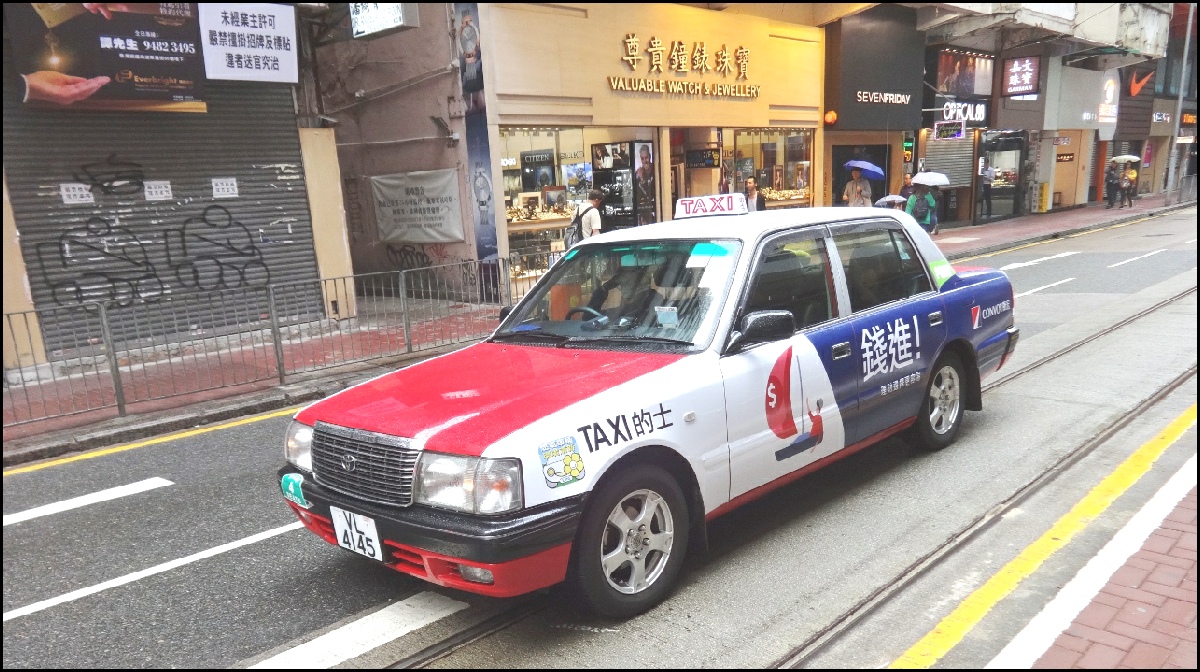 BELOW : Today the weather is a bit inclement, so I have decided to take advantage of the tram to investigate some of the city, while remaining dry. While I am waiting for a tram, one of the many available Toyota taxis passes by, and slips into the view finder of my camera. 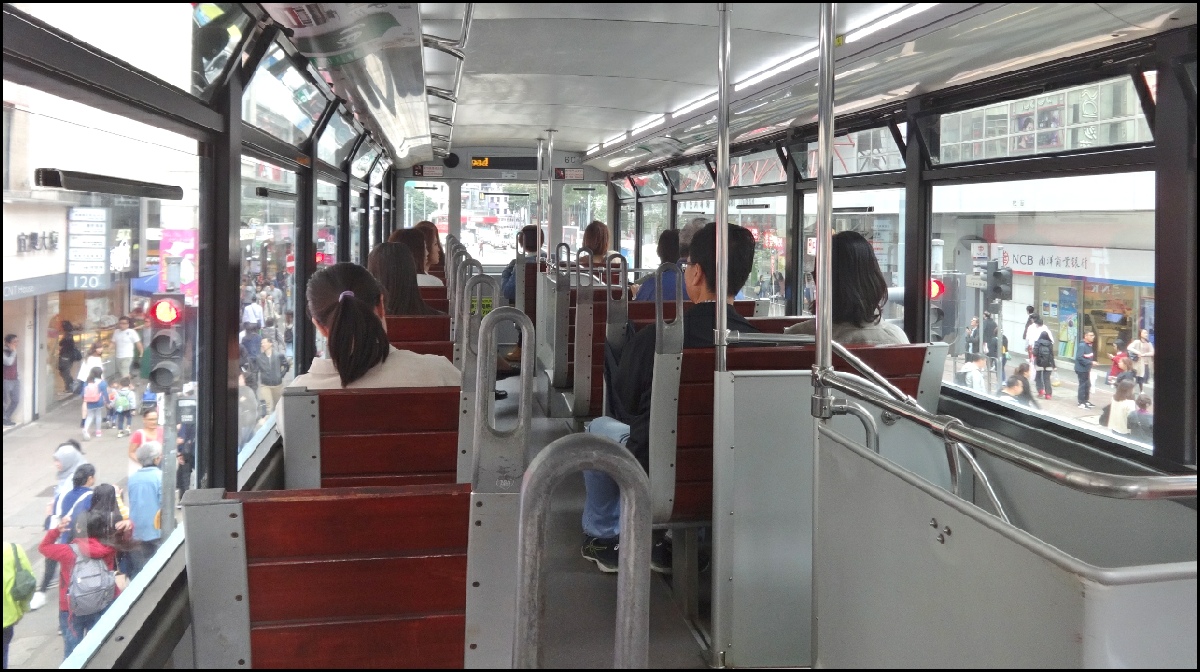 BELOW : My first ride on one of the more modern of the double deck trams. It costs about 50 cents Australian to travel 1 stop, or travel 120 stops. The seating is for one passenger on the left, and two passengers on the right hand side of the tram.  To see my YouTube clip of the tram approaching Admiralty, CLICK HERE. 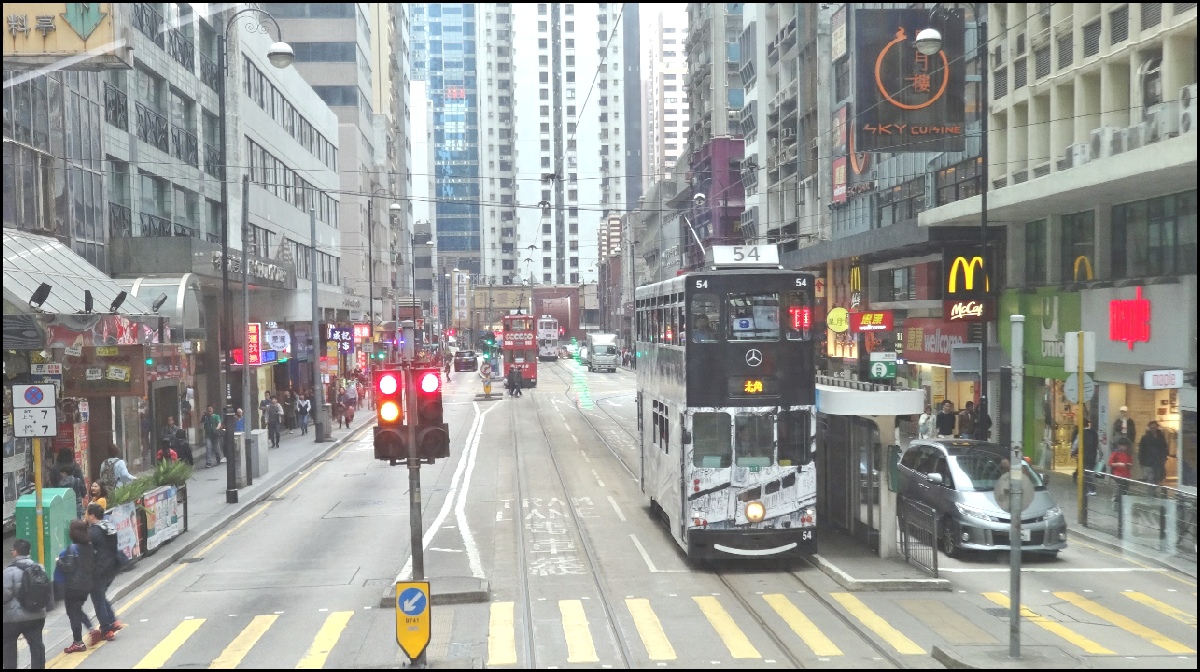 BELOW : On the main road areas of the tram route there are tram tracks going in both directions. 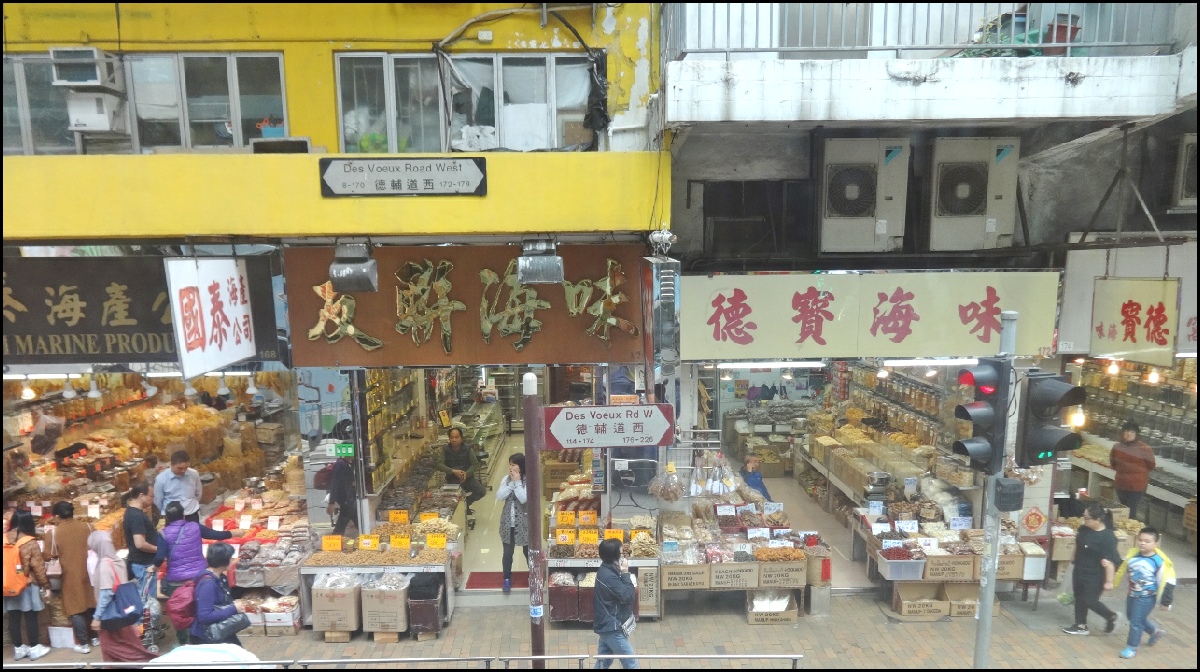 BELOW : I am travelling in the upper deck of the tram, looking out to the left (on Des Voeux Road West, Sai Ying Pung) as we pass by some Saturday morning shoppers. 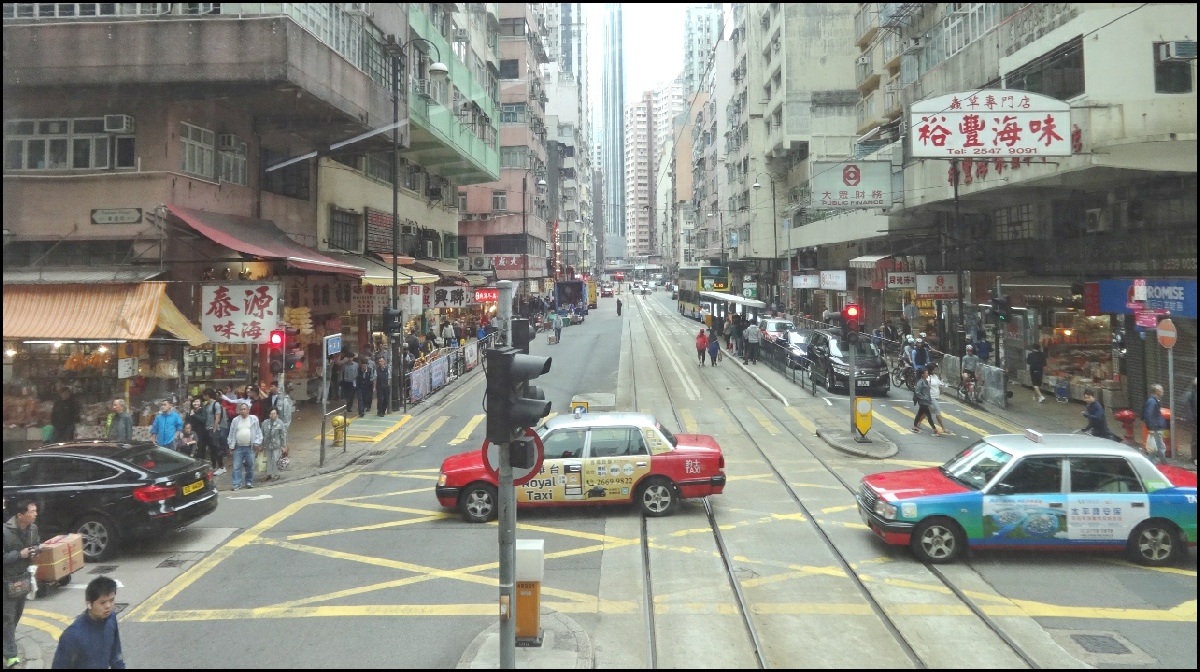 BELOW : And now, looking straight ahead from the front seat of the tram, further down Des Voeux Road. 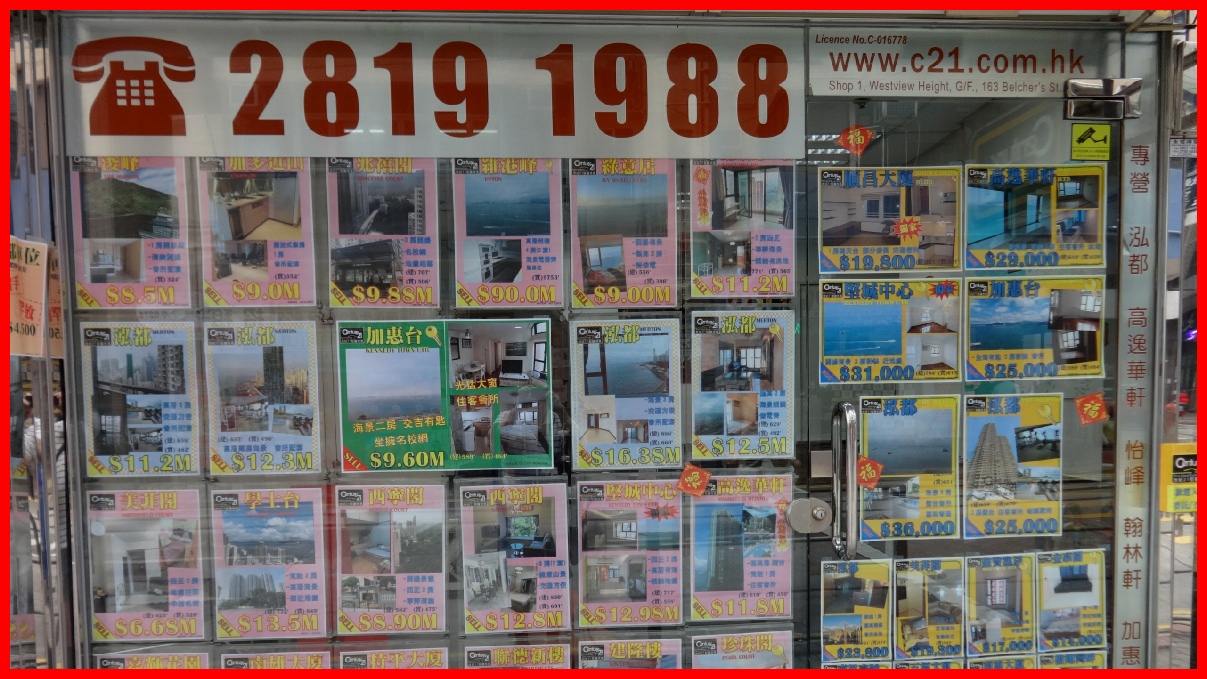 BELOW : I have now arrived at the end of the line, in the westerly direction, Kennedy Town. In a real estate agents window I see apartments for sale, ranging in price from HK$5 million to HK$90 million. On the RHS of this photo, the prices in blue are rents Per Month, ranging from HK$17,000 to HK$50,000.(When you divide by 5 for AUD prices, they are still huge prices !) 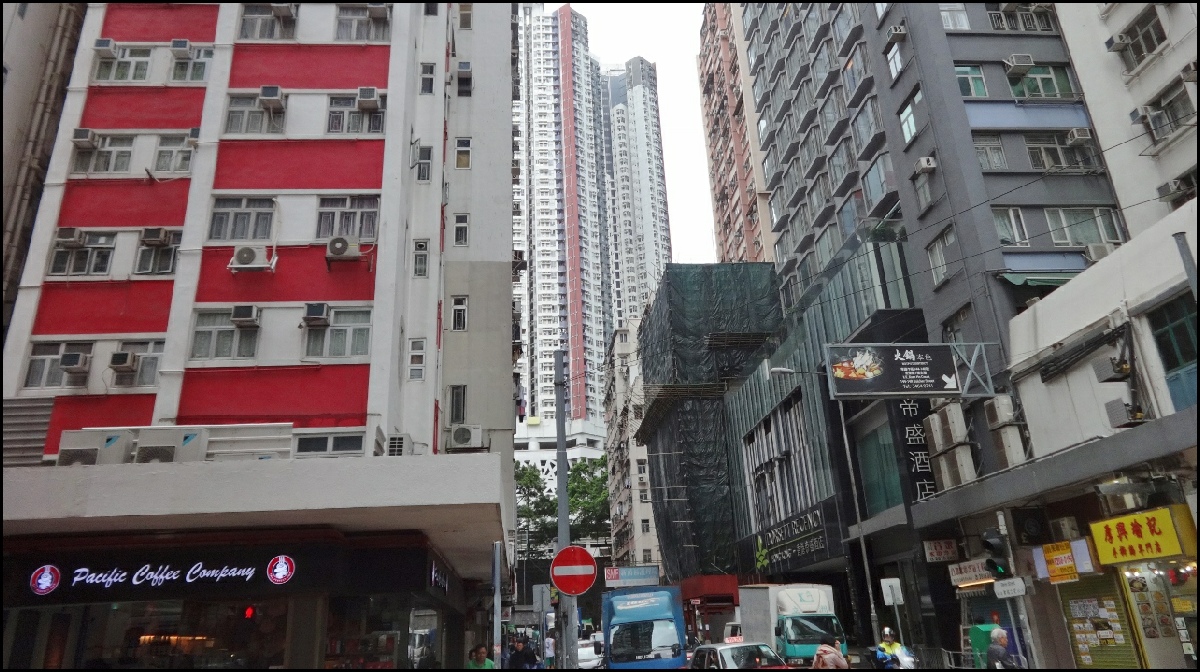 BELOW : Walking the streets of Kennedy Town I am conscious of the combination of old and new apartment buildings. The older style buildings are often able to be identified by the outside units for air conditioners, mounted on each level of the building. 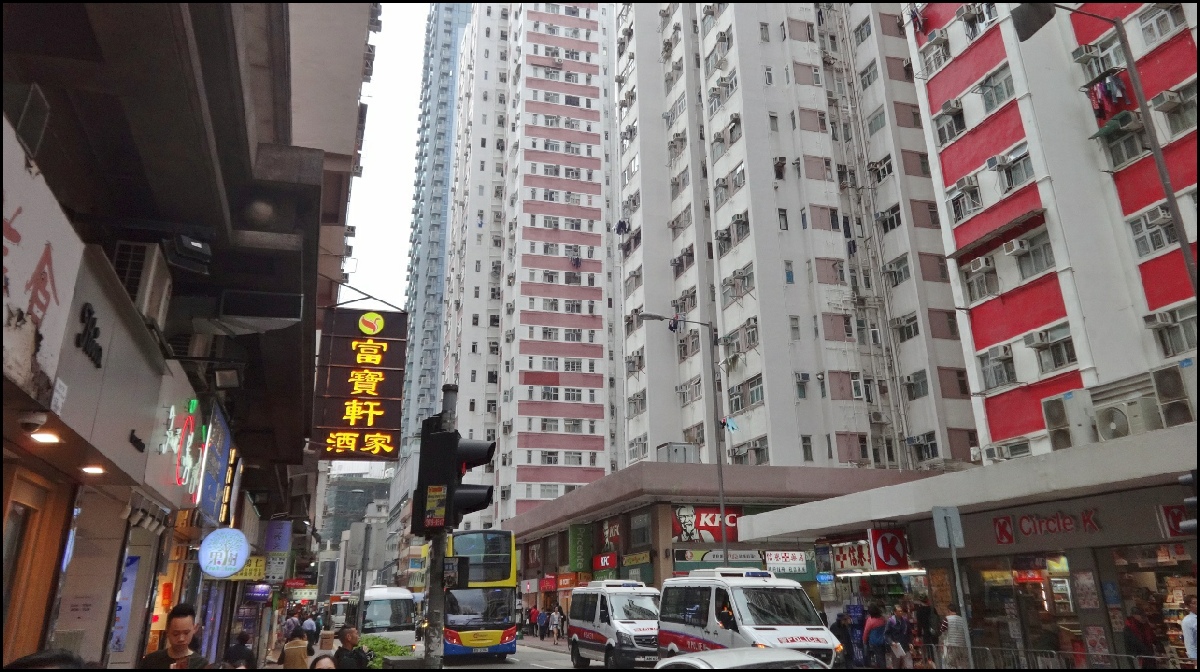 BELOW : It was hungry work investigating the streets of Kennedy Town, so I did venture over at one stage, to do some business with ‘The Colonel’. 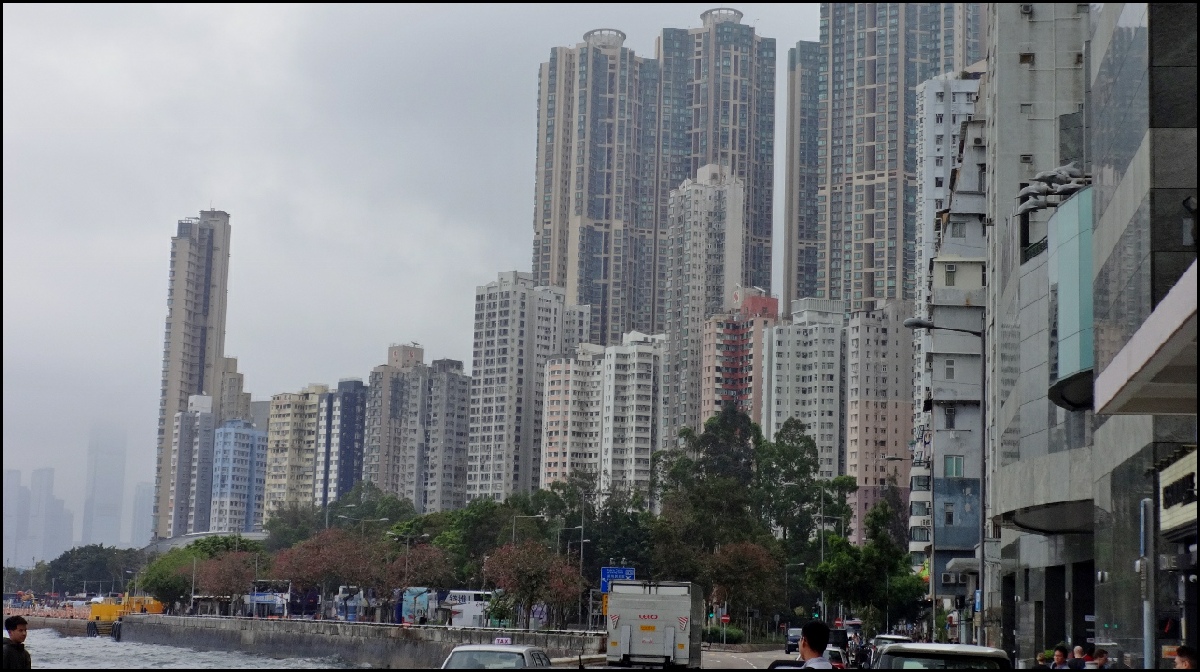 BELOW : Just a couple of streets over, closer to the shore, the buildings are still tall. At least many will have ‘water views’ instead of ‘wall views’. 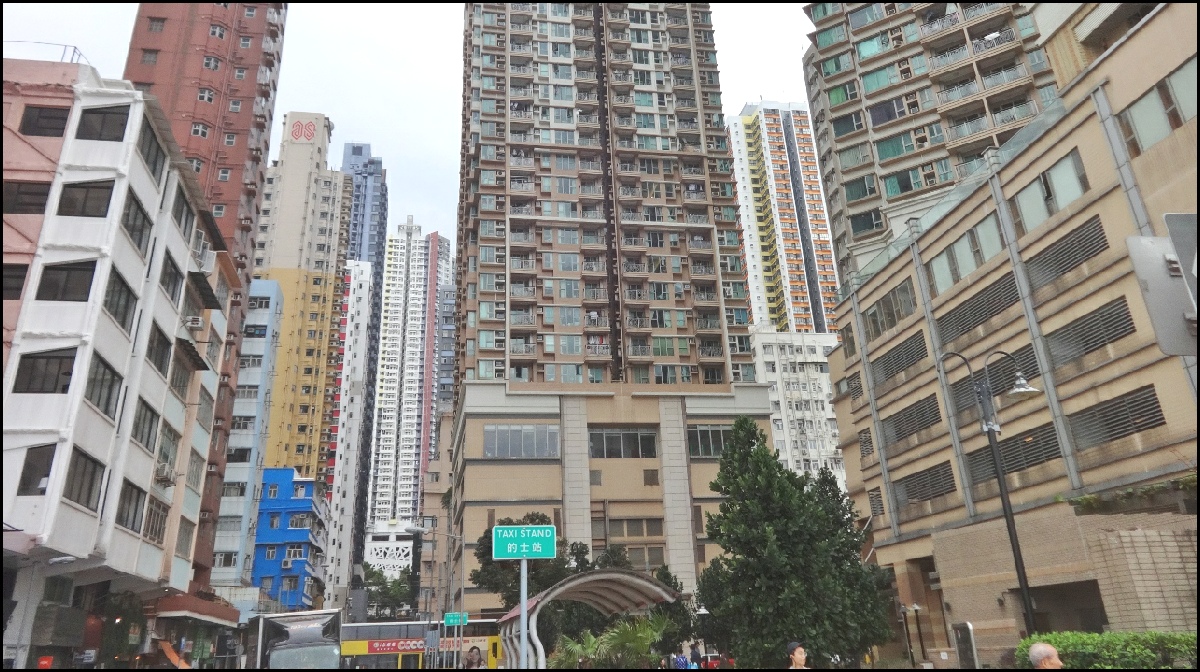 BELOW : Yes, you are correct . . . There are a few apartment buildings in Hong Kong ! 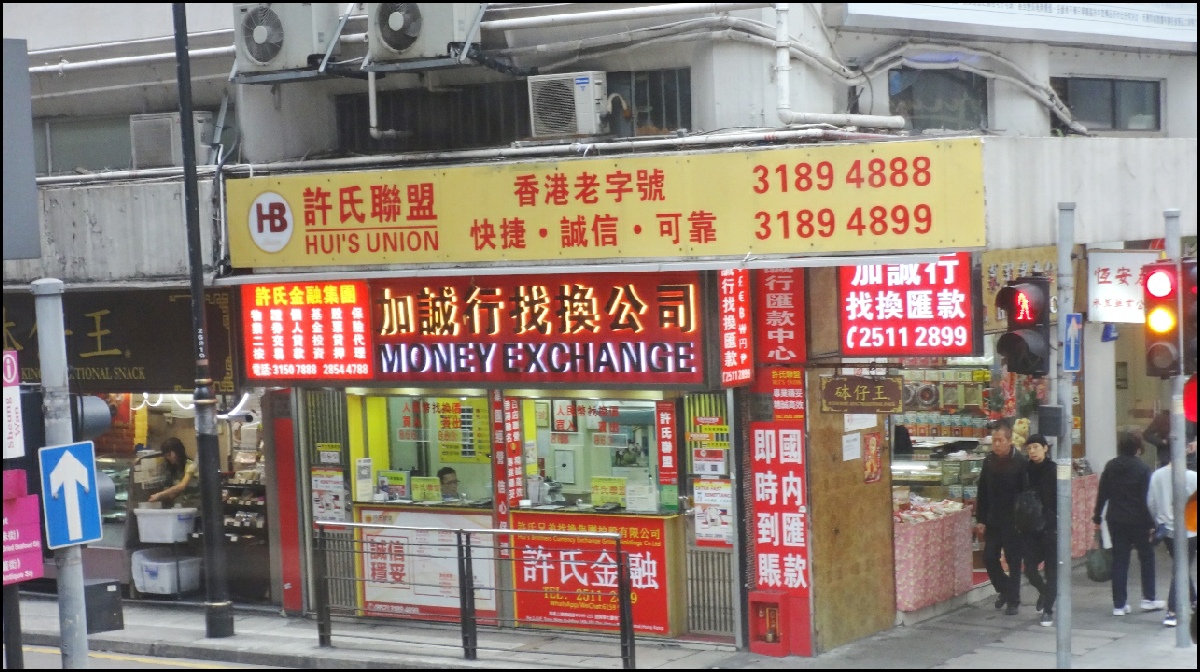 BELOW : Money Exchanges are available on many corners. Almost as prolific as the corner pub (I would have said Banks, in days gone by ! ), in many Australian regional towns ! 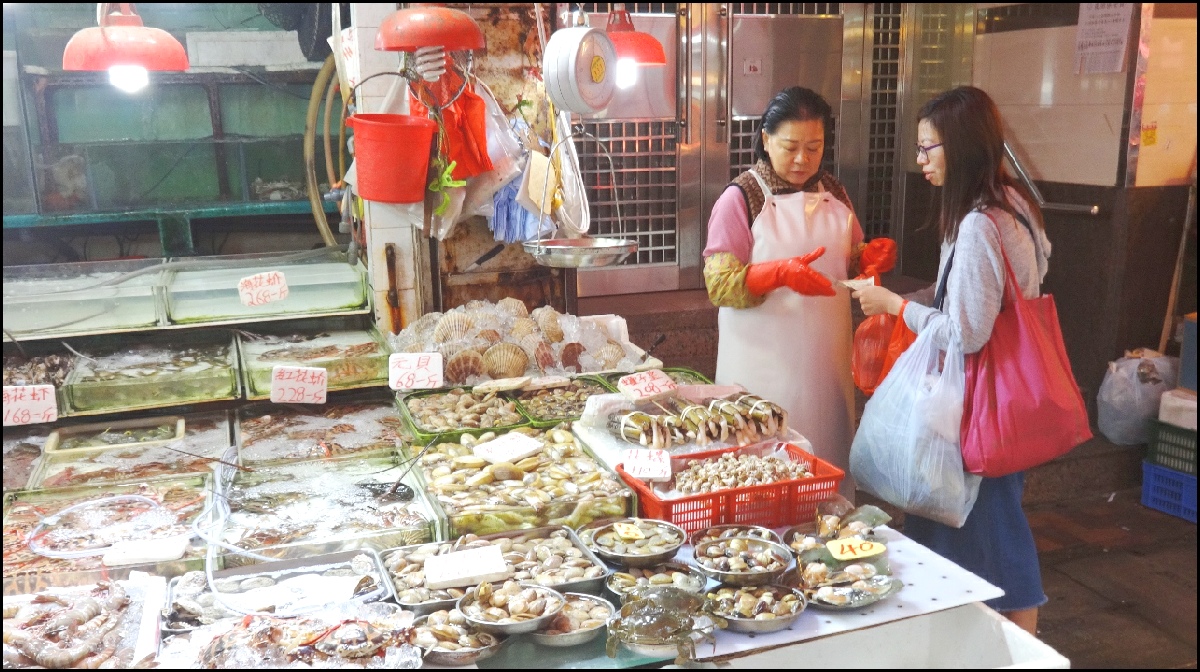 BELOW : Meanwhile,back in Causeway Bay, there were open air food markets just a couple of streets away from my hotel.  To see my YouTube clip of the open air market, CLICK HERE. 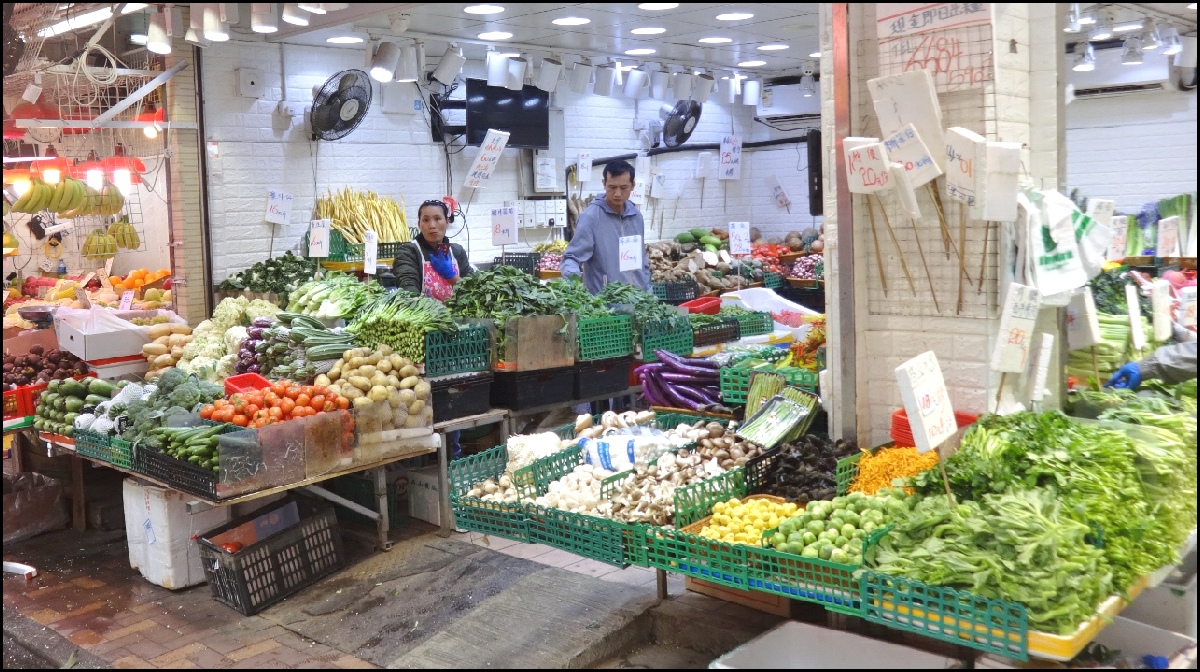 BELOW : It’s Sunday morning, and I am going to join my cousin’s family for a short taxi ride to travel up to Victoria Peak (The Peak), to see the two boys playing soccer. On the walk from my hotel to their apartment I pass by these street markets. 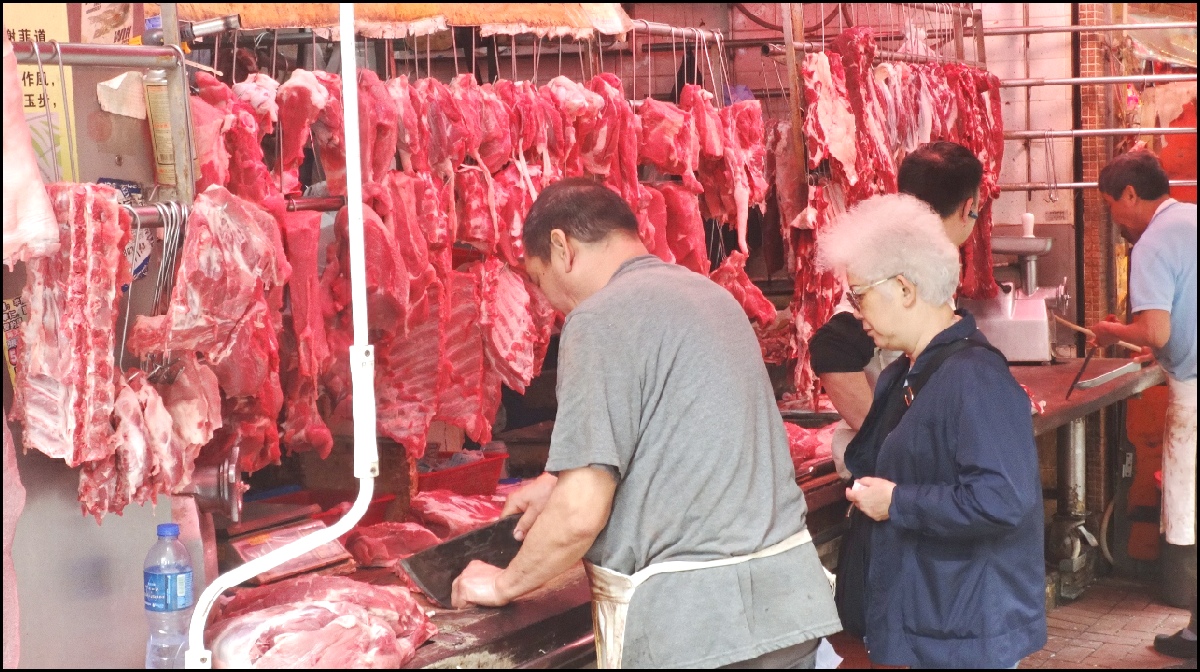 BELOW : The meat section. 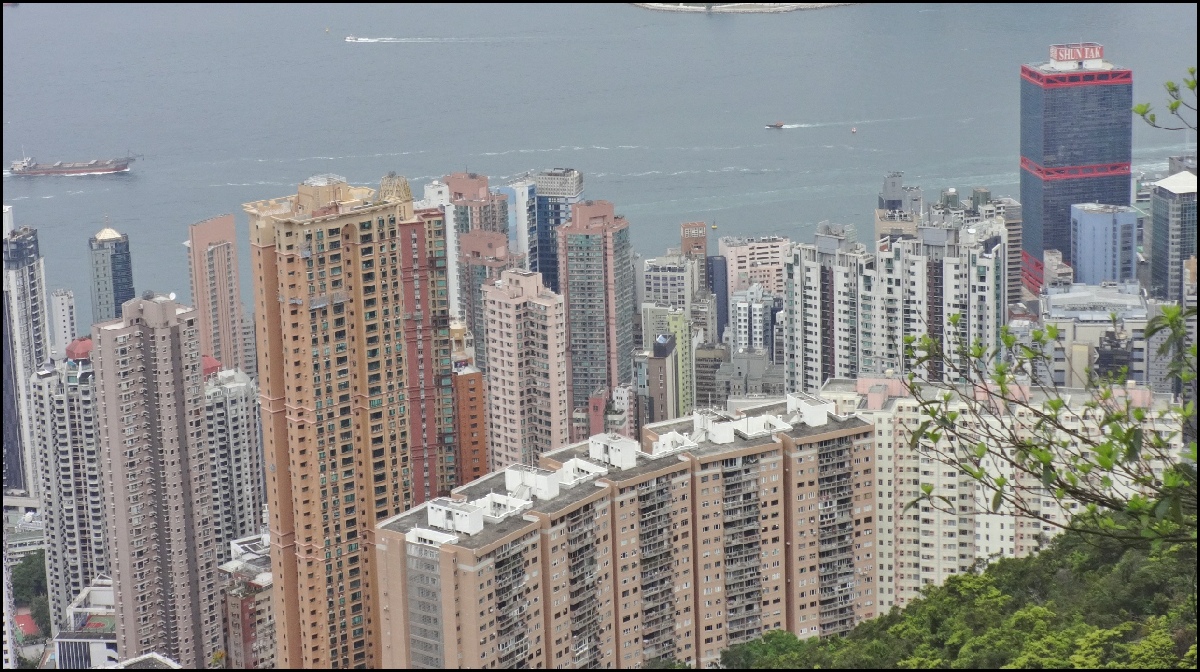 BELOW : Once the soccer was over at The Peak, we went on the Peak Circle Walk. It is a pleasant walk, generally fairly flat walking, and on a mainly bitumen sealed surface. The pathway is about 3.5 kilometres in length, and as with all good circles, you can end up where you started ! Along the way you get plenty of views of the harbour, and other parts of Hong Kong island. 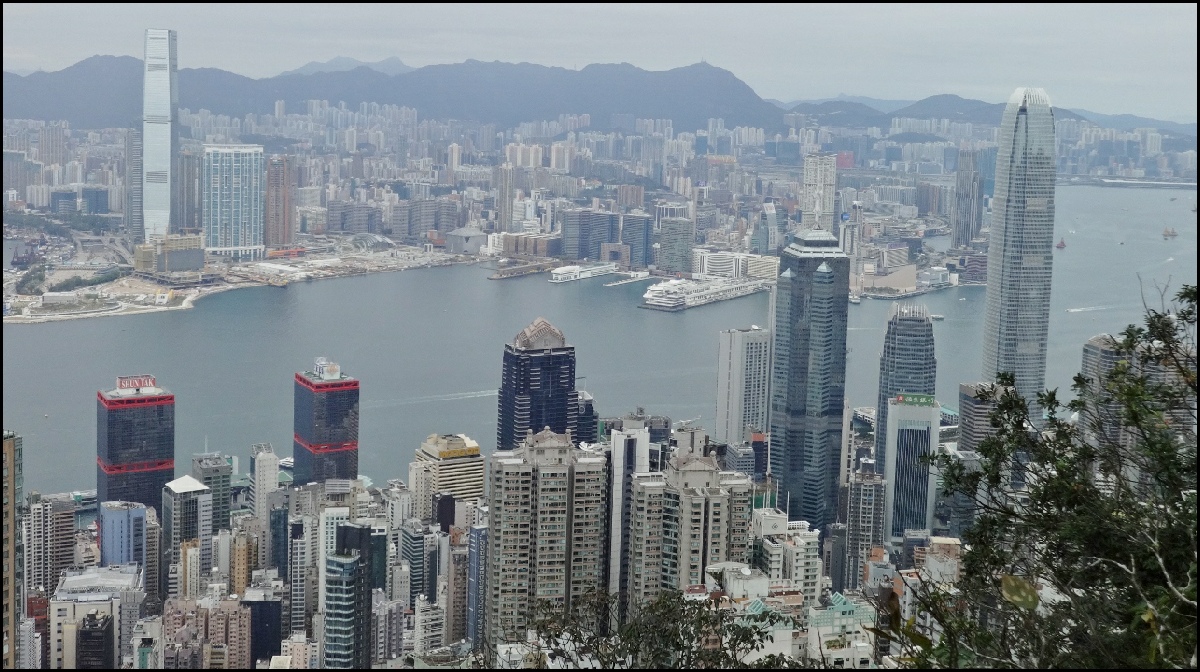 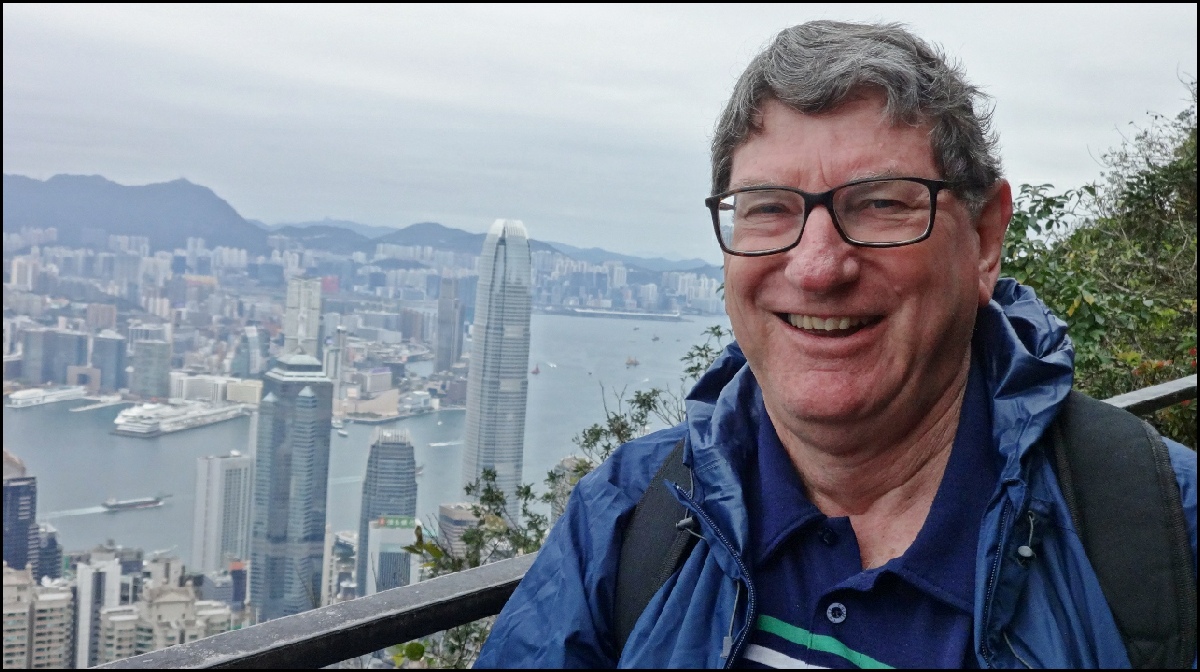 BELOW : A smiling senior citizen we encountered during the walk. IFC2 can again be seen in the background. 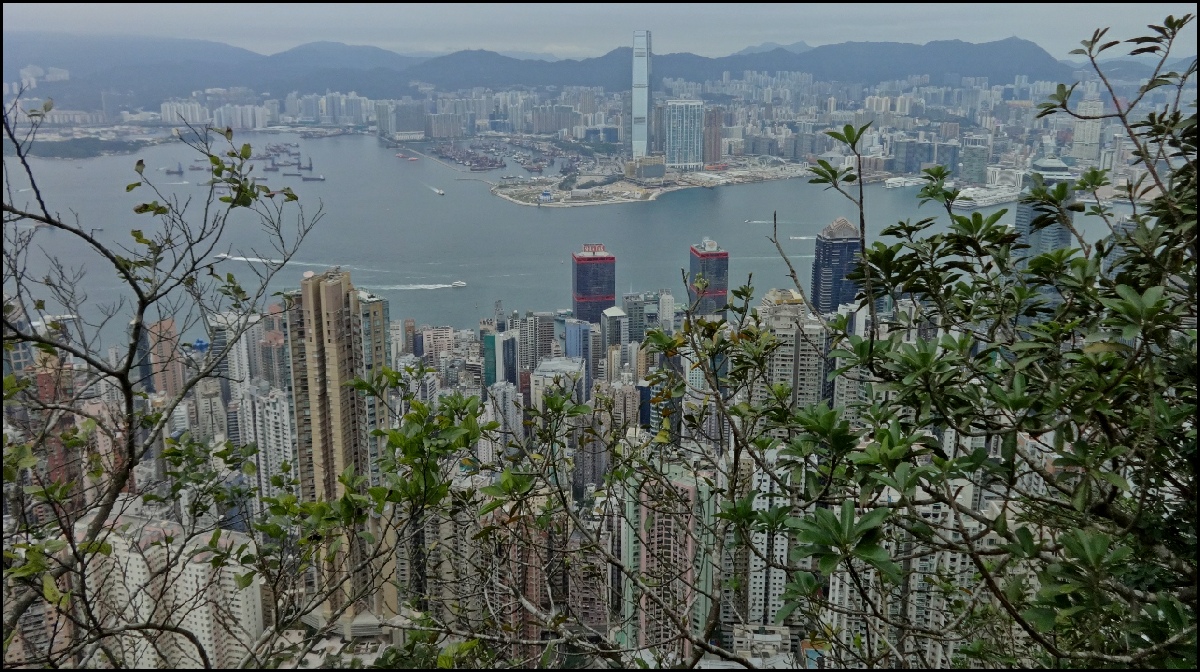 BELOW : And the ICC again in the top of photo. 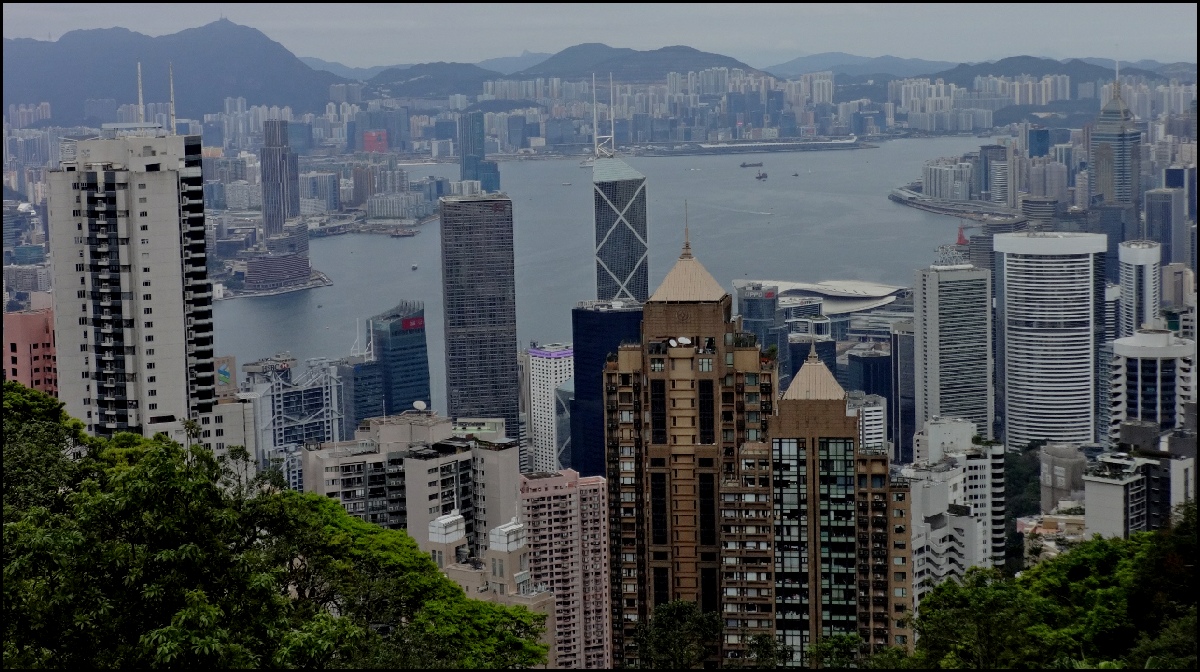 BELOW : Looking across Victoria Harbour toward Kai Tak, the site of the original Hong Kong International Airport. The new airport is about 30 km to the west, and opened in 1998. 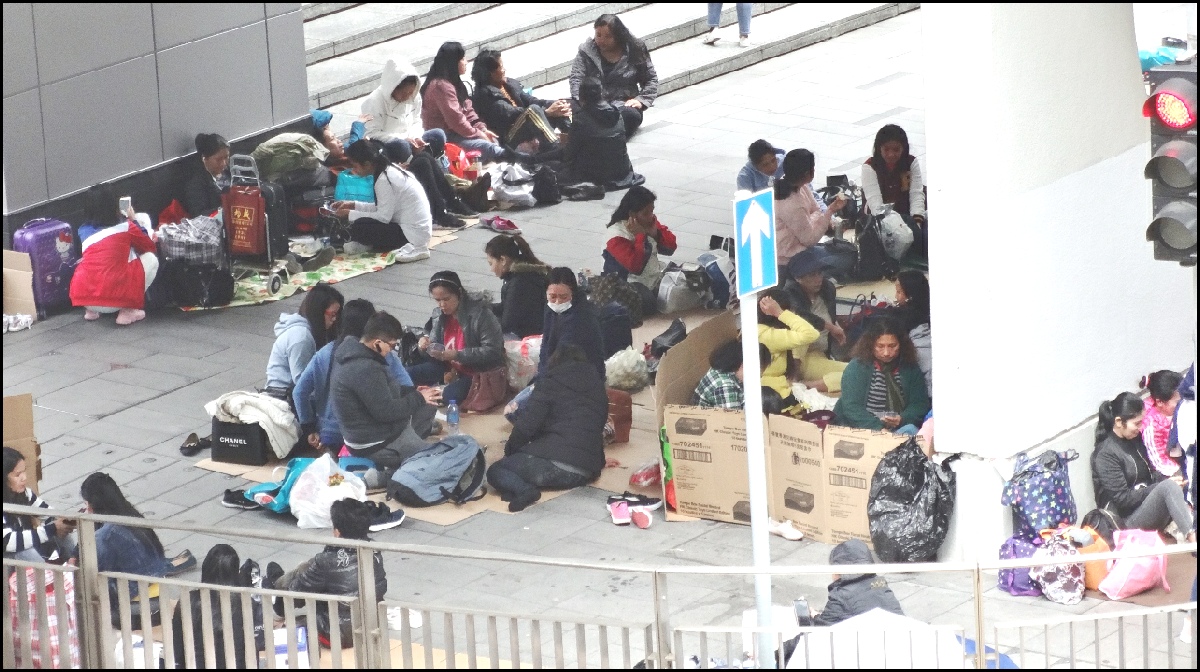 BELOW : After walking down from The Peak, on the Old Peak Road, we went to the main walkway areas around Central CBD. On Sunday most of the ‘foreign domestic helpers’ (maids) have their day off. It is the one day a week when many of these helpers can catch up with friends and other women from their own cultural background. Many set up little areas around the walkways, where they can eat, talk, play games, or sing songs and dance together. To give them some sense of having their own ‘personal space’ they often use cardboard boxes to act as privacy/dividers in the open space, and also to give some sense of flooring, over the cold concrete they are sitting on in the walkway areas. If I had not been told (in advance by my cousin) what to expect, I would probably, at first glance, have assumed they were refugees or homeless people. 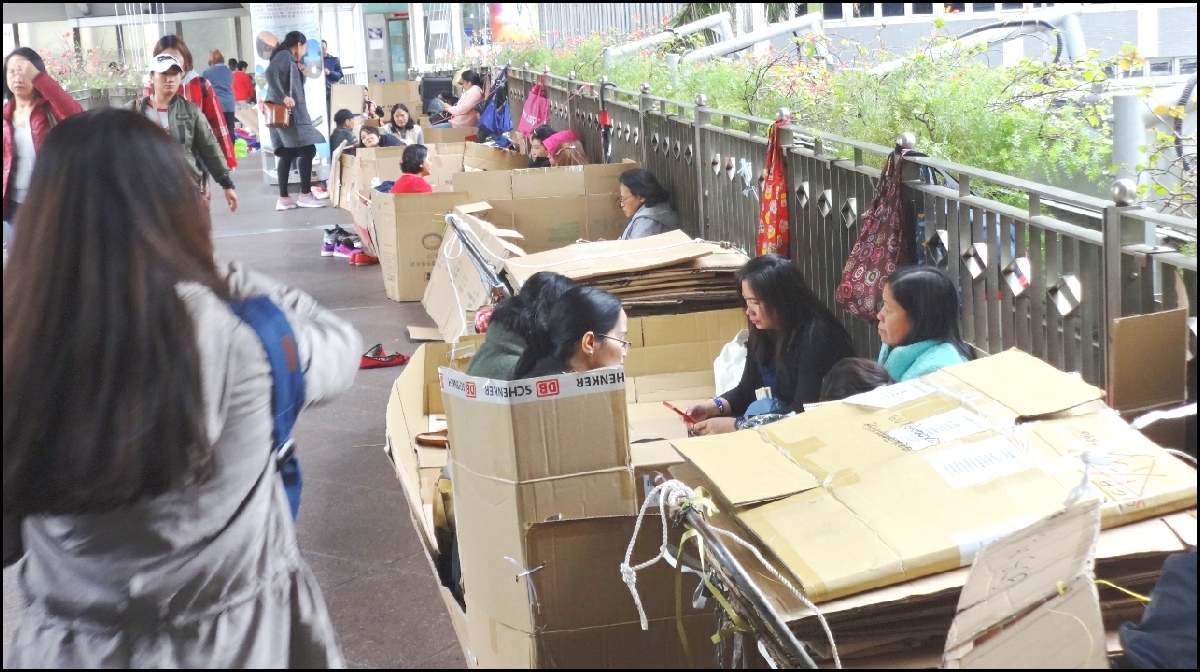 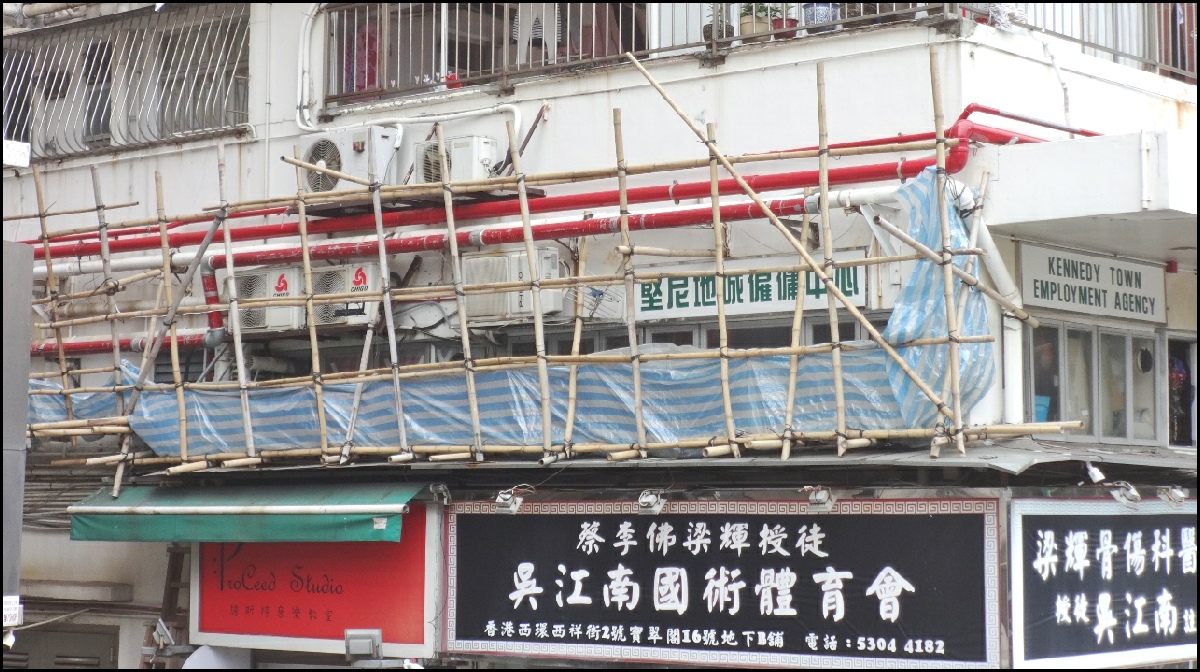 BELOW : Wherever I went around Hong Kong there was often some type of building renovation or new building work happening. The main thing I noticed was that scaffolding structures generally used bamboo, not steel, for their construction. 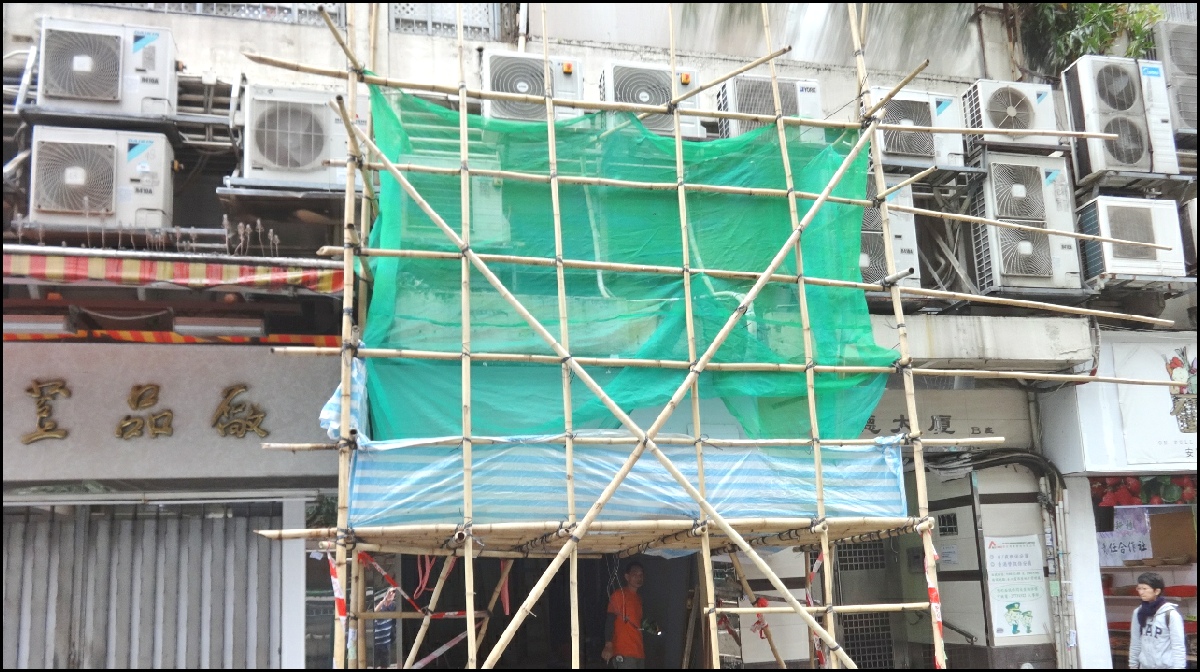 BELOW : According to a number of sources the bamboo structures are preferred to their steel / metal equivalents. One source I read says “Compared with iron rods, bamboo rods are cheaper, faster to build, and easier to transport. Despite their appearance, bamboo rods are actually safer, as they are much lighter than iron rods and cause less damage if they fall.” 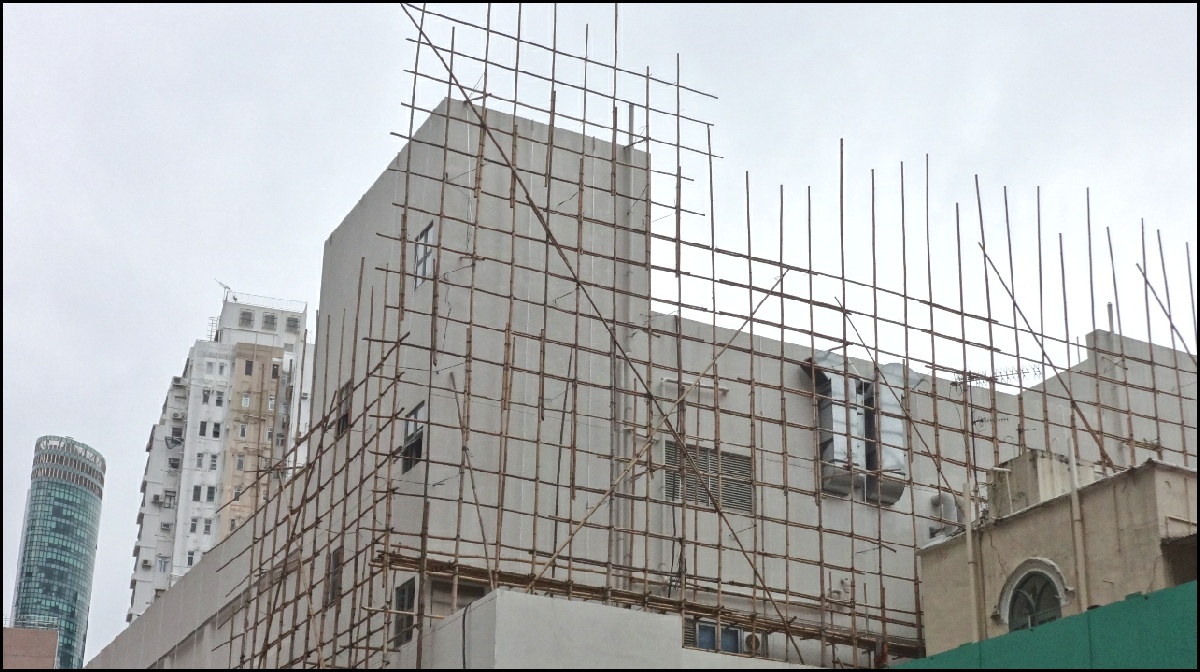 As of 2013, there were 1,751 registered bamboo scaffolders and roughly 200 scaffolding companies in Hong Kong, many of whom are members of the Hong Kong & Kowloon Scaffolders General Merchants Association Limited.” (This information was gleaned from the Expats.Hk website.) 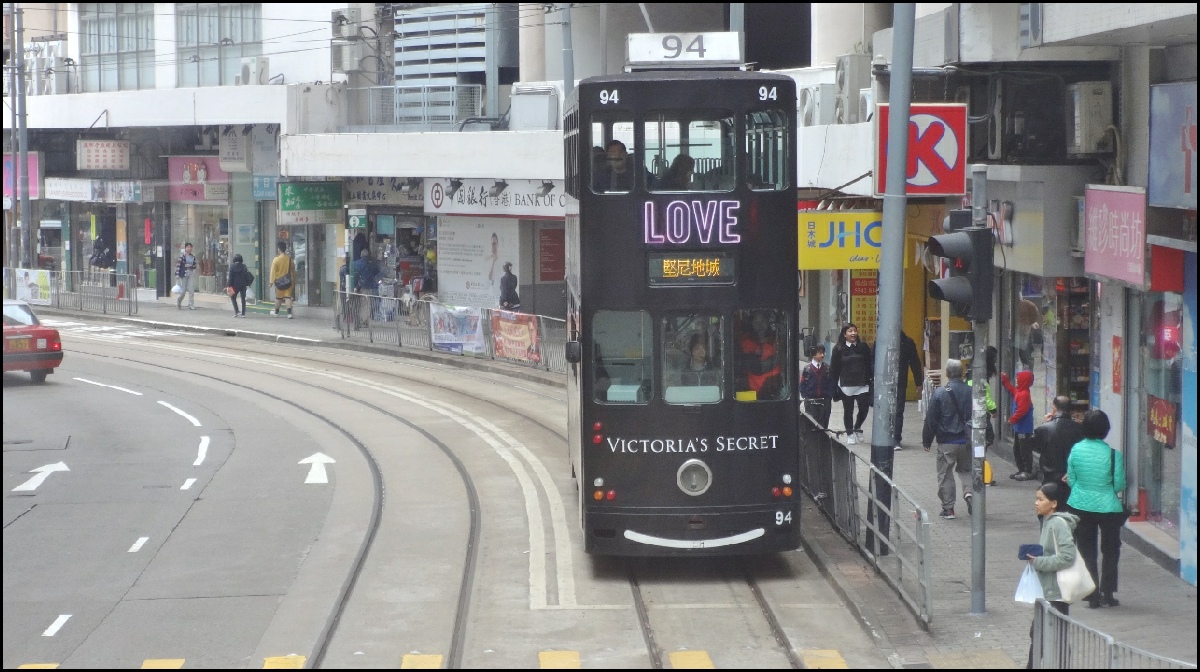 BELOW : Well, I am thinking that Victoria’s secret will not be kept too long . . Whatever that secret may be.

If you are viewing using a device with a mouse attached, the photo above can be ‘zoomed’. If you move the mouse pointer to within the ‘red perimeter’, you should see a magnified image appear of the photo. Whichever section of the photo you are pointing at will be magnified. You can increase/decrease the magnification level by using the ‘scroll wheel’. Move the pointer around the photo to magnify any section. For best results, have the top of the photo located near the top of your screen before ‘pointing’ on the photo.